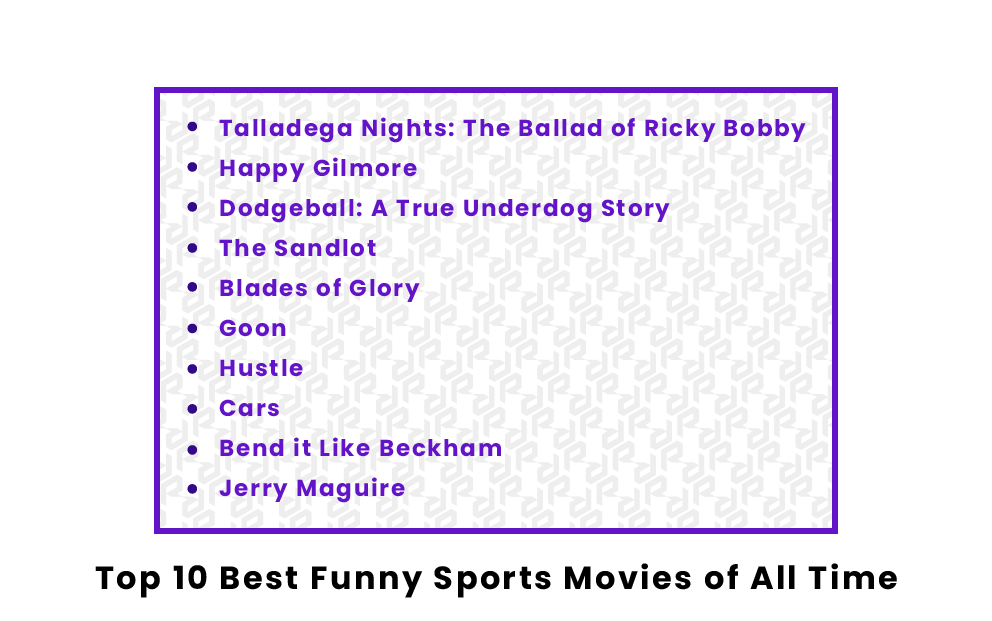 There’s nothing quite like finding the perfect combination of comedy and sports. This niche combination of genres is a highly-followed genre in and of itself. From oldies to new flicks, check out this list of the top ten sports comedies (along with some honorable mentions) to make your anticipated movie night just a little easier.

What are the funniest sports movies ever?

With an incredibly hilarious lineup of actors like Will Ferrell, John Reilly, Amy Adams, and Sacha Baron Cohen, this 2006 comedy follows main character Ricky Bobby (played by Will Ferrell) on his quest to compete, succeed, and most of all, go fast. One of the more famous quotes that truly encompasses the competitive and comedic nature of the film is, “If you ain’t first, you’re last,” said by Ricky Bobby himself. This classic film, which is rated PG-13, is easily repeatable and will have you and your friends laughing uncontrollably as it pokes fun at NASCAR stereotypes with rowdy humor.

Happy Gilmore ranks number two on the top ten sports comedies and is a much more relaxed movie than his newer Hustle. Released in 1996, this witty, laidback, and family-friendly movie has been considered a classic for ages. Sandler plays a young ex-hockey player who knows nothing about the rules of golf. When he realizes he can hit a golf ball just like a hockey puck, he takes to the course to win his grandmother’s home back. He co-stars alongside Julie Bowen and Christopher McDonald to make for iconic and classic movie scenes. When you think of sports comedy, you think Happy.

Dodgeball: A True Underdog Story follows the story of local gym owner Peter LaFleur (Vince Vaughn) as he attempts to save his business from corporate fitness chain Globo Gym and its psychotic owner White Goodman (Ben Stiller). This hilarious yet heartwarming 2004 film sees the fate of local gym “Average Joe’s” rest on a Las Vegas dodgeball tournament that has a $50,000 cash prize, enough to save the gym. However, White Goodman also formed a team for the tournament, and his Globo Gym Purple Cobras faced off against the Average Joe’s in the championship match. Dodgeball: A True Underdog Story is a perfect blend of comedy and suspense, and is a must watch for any sports fan.

As the oldest movie on this list, released in 1993, The Sandlot follows an early sixties children’s baseball team. It is a typical coming-of-age movie involving sports, rowdy kids, and good old-fashioned summer fun. Some would even describe it as a cult classic, as it has become a movie with endless memorable quotes like, “you’re killin’ me, Smalls!” It became a three-part movie series by 2007, starring actors like Patrick Renna and James Earl Jones. This PG movie is an easy go-to for children or adults; it is truly a family favorite!

Swaying from the more “basic” sports like basketball, football, or hockey, Blades of Glory has been a classic and hysterical figure skating film. Starring Will Ferrell and Jon Heder (star of Napoleon Dynamite), this 2000s comedy has a loaded cast. The film follows two of the top male figure skaters of their time. However, after an altercation between the two, both of them lost their titles. Yearning to start over, they realize there is another way they can compete. Without a doubt, Blades of Glory is one of the most unique and humorous sports movies out.

Released in 2011, Goon tells the story of local nice, but incredibly tough guy Doug Glatt (Seann William Scott), who is a bouncer at a local bar in Massachusetts. While everyone views Glatt as a heartwarming character, he feels like an outcast in his family, who are all doctors. After attending a local hockey game with his mischievous and profane best friend, Pat (Jay Baruchel), and fighting a player from the ice in defense of Pat, he is offered a spot on the local team to be a “goon.” Despite not learning how to skate, Doug excels in the minor hockey league, fighting his way through almost every game. This story shows defeat and triumph, with a substantial amount of hilarious dialogue. Goon is a must watch for any sports fan, whether you’re a hockey fan or not!

On a slightly more serious note, this 2022 film, Hustle, stars Adam Sandler with Queen Latifah and Juancho Hernangomez. Produced by NBA star LeBron James, it follows a Philadelphia 76ers scout on his quest to bring an international ball player to the United States. The Netflix film takes on a more genuine plot, especially for Adam Sandler, who typically takes on satirical comedies. With a few witty comments and jokes here and there, it can become more of a “dramedy” and make for a great movie night. However, it is loosely based on the true stories of many current NBA players. This makes for an inspiring and gritty yet lighthearted movie.

This list of funny sports movies wouldn’t be complete without a Disney-Pixar film. Released in 2006, Cars became an immediate success. Not only is this racing movie family-friendly, but it’s fun for all ages! Featuring star voices like Owen Wilson, Bonnie Hunt, and Larry the Cable Guy, with music by Rascal Flatts, James Taylor, and John Mayer, Cars was certain to draw attention. It even became a three-part series. The animated film follows the famous racecar “Lightning McQueen” on a humbling cross-country journey to a race. Cars works to teach lessons about positive attitudes, friendship, and life overall.

Bend it like Beckham was released in 2002 and has been a go-to movie for any girl raised in the 2000s. The film stars Keira Knightly, Parminder Nagra, and the man for its namesake, David Beckham. Another coming-of-age film, Bend it Like Beckham follows the story of two British girls who rebel against their parents and make the decision to practice for careers in professional soccer. This movie is the perfect combination of drama, comedy, and a family/friendship story.

Tom Cruise stars in the 1996 romantic comedy about a sports agent named Jerry Maguire, who decides to take a career-turning risk. Along the way, he meets a new coworker whom he has much in common with. The film was loosely inspired by a true story about an NFL agent with a client in free agency. The cast is unbelievable too, not only with Tom Cruise but with Renée Zellweger, Kelly Preston, and Cuba Gooding Jr. There cannot be a list of ten comedies without including at least one romantic comedy, and this is the perfect mash-up of all kinds of topics and genres.

What are the best sports comedies of all time?

The best sports comedies of all time are Talladega Nights, Happy Gilmore, and Dodgeball. Talladega Nights: The Ballad of Ricky Bobby is a 2006 film starring Will Ferrell as Ricky Bobby, a NASCAR driver who seeks to prove himself. Happy Gilmore is a classic title released in 1996 and starring Adam Sandler that follows the story of a hockey player turned golfer who battles with golf legends to win his grandmother’s home back. Dodgeball: A True Underdog Story was released in 2006 and focuses on a high-stakes dodgeball match that the main character, Peter LaFleur (played by Vince Vaughn), needs to win to keep his gym. Regardless of which title you choose, you will find yourself laughing at the hilarious sports-related stories of these comedy movies.

What is the highest rated sports comedy of all time?

The highest rated sports comedy of all time according to Rotten Tomatoes is The Bad News Bears (1976), scoring 97%. The Bad News Bears is the story of an underdog little league team coached by Morris Buttermaker (Walter Matthau), a former minor league baseball player and current alcoholic. It is a heartwarming comedy that shows how people can change, from underdog to champion and deadbeat to beloved coach. The highest rated sports comedy according to IMDb is The Sandlot (1993), receiving 7.8 stars. The Sandlot is a hilarious film that follows a group of young baseball players and the mischief they get into during the summer. It is a classic movie that is beloved by sports fans and comedy enthusiasts alike.