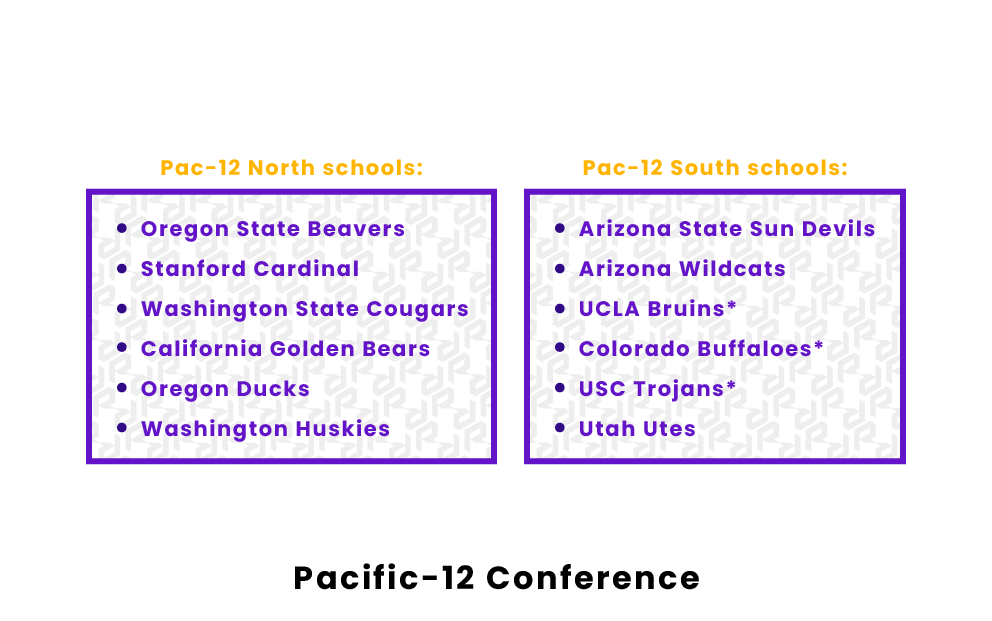 The Pacific-12 Conference, more commonly referred to as the Pacific-12 or “Pac-12,” is one of the Power Five conferences in the NCAA. The Pac-12 mainly consists of universities from the west coast, but the future of the league is up in the air. Nonetheless, the “Conference of Champions” has one of the most successful and rich histories in the NCAA.

What Schools are in the Pac-12?

The Pacific-12 Conference includes 12 schools from six different U.S. states. These 12 schools divide up into two divisions for major sports, such as football and basketball: the Pac-12 North and Pac-12 South. The following is a list of Pac-12 schools by division, followed by their standard abbreviations and mascots:

Divisions allow schools to maintain regional rivalries by ensuring yearly competition against every team from their division in sports like football, where the number of games is limited.

Montana departed in 1950, and the conference dissolved amid scandals at multiple schools in 1959. Cal, UCLA, USC, and Washington then immediately created The Athletic Association of Western Universities. By June of 1964, Oregon, Oregon State, Stanford, and Washington State had joined to form the Pacific-8.

Member institutions of the Pac-12 field teams for 11 men’s sports and 13 women’s sports for a total of 24.

Teams that are fielded for men’s sports are:

Teams that are fielded for women’s sports are:

The Pac-12 Network is owned solely by the Pac-12 Conference. The ownership of the network is relevant because it has caused some controversy among consumers and conference members alike.

Since the Pac-12 maintains ownership of all its content, it can be more difficult for fans of teams in the Pac-12 to watch their favorites compete regularly compared to other conferences. For example, the Big Ten Conference’s deal with FOX allows nearly all of its football and basketball games to be broadcast on every cable and satellite provider in the United States and Canada. The ACC, Big 12, and SEC have deals with ESPN that allows their networks and, therefore, nearly all their football and basketball games to be broadcast on ESPN.

The Pac-12 Networks include a national channel (known as the “Pac-12 Network”) and six regional channels that include two schools each. These local networks are as follows, along with the schools they cover:

Each regional network is supposedly available to consumers that live in each region, although this is on a case-by-case basis with each network and provider.

The Pac-12 also owns the Pac-12 Digital Network, which allows their games to broadcast on mobile devices with proper logins.

In the next couple of years, the Division I NCAA conferences are expected to undergo a major realignment. It all began when Texas and Oklahoma announced their decision to move from the Big 12 conference to the SEC starting in 2025. Conversely, the Big 12 decided to add BYU, UCF, Cincinnati, and Houston to their conference in 2023. Following that decision, USC and UCLA announced that they were leaving the Pac-12 to join the Big Ten in 2024.

While Texas and Oklahoma were the first dominos to fall, there are likely going to be more changes in the near future. The Pac-12 will likely add teams to replace the ones they lost, or entire conferences may realign. Anything is possible at this point, but for now, we know that the Pac-12 will be losing two of its key members.

The Pac-12 earns its name from its status as the “Pacific Conference,” featuring West Coast teams whose campuses lie near or along the Pacific Ocean, with a total of 12 teams featured. In the past, it has also been known as the Pac-10 and Pac-8, when the conference featured fewer programs.

What teams are in the Pac-12 Conference?

What conference are USC and UCLA in?

For now, USC and UCLA are both in the Pac-12 Conference. USC joined in 1922, and UCLA joined in 1928. The two teams have enjoyed an intense rivalry ever since, with the two universities being located only 12 miles apart. However, in 2022, both USC and UCLA announced their decision to transfer over to the Big Ten conference. Starting in 2024, USC and UCLA will join the likes of Ohio State, Michigan, Penn State, and Iowa.