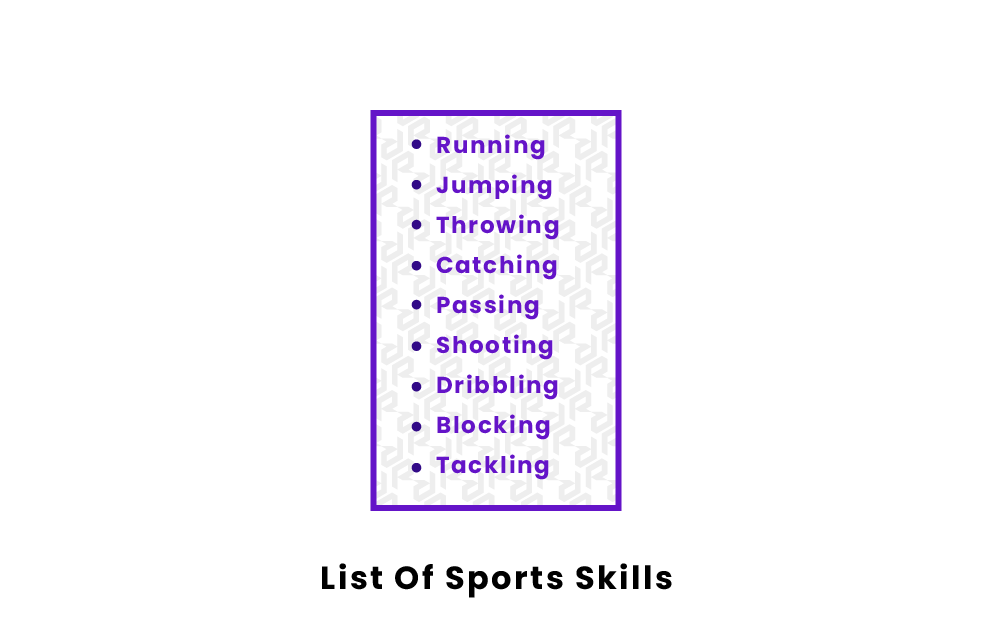 To play any one particular sport, you need to have many skills. In order to be a two or three sport athlete, you will need an even wider array of skills. Luckily, some skills are used in multiple sports, meaning you won’t have to develop all new abilities to learn a new sport. The list below will show you the most universal skills you need in order to excel at sports.

Below is a list of the most important skills in sports:

Running is a skill that is incredibly important in several individual and team sports. Running is how players move from one position to another in the field of play. If a player is a fast and calculated runner, they will be able to get away from the opposing players and put them in a better position to score points. For example, in soccer, a good run can be the difference between a goal and a clearance.

Like running, jumping is a very useful skill in individual and team sports. In basketball, jumping is one of the main ways that players get the elevation they need to shoot the ball into the net. There are also sports in track and field, such as the long jump or pole vault, that are almost entirely focused on jumping, and the competition is won by whoever is able to jump the farthest or highest.

Catching is the action taken by an athlete to receive a throw or pass. It is an extremely important skill universally, as almost every sport requires some form of catching. For example, football players catch passes from quarterbacks to move the ball upfield. In other sports, such as hockey or soccer, goalies attempt to catch shots from opponents. An athlete that is good at catching will help their team to be in a position to score points or help stop the other team from scoring.

Dribbling, similar to shooting, can look different depending on what sport you are playing. In basketball, dribbling means bouncing the ball on the court as you move around. In soccer, dribbling refers to handling the soccer ball with your feet as you move around the field. Dribbling is all about retaining possession of the ball while moving quickly and keeping your head up. Dribbling is one of the first skills players learn in sports that use it. With that said, it is a vital part of the game.

Blocking is a general term for a player defensively using their body to block an opposing player from moving down the field or getting possession of the ball. In football, blocking must meet specific criteria to be considered a legal block. In other sports, like basketball, blocking may count as any attempt by the defense to block the offense from progressing or scoring.

Tackling is the act of a player hitting their opponent’s body with their own body during gameplay, typically until both players are on the ground. This is a common way for defensive players to aggressively stop offensive players from controlling the ball or making further progress down the field. Tackling is most common in high-contact sports, such as football or rugby.

What fundamental skills are needed to play sports?

The fundamental skills needed to play most sports are balance, coordination, speed, power, agility, and reaction time. Although most sports require specialized skills, such as kicking, passing, and ball control, developing these basic skills will help you improve at almost any sport. Talented athletes excel at each of these basic skills and work hard to further develop them in order to improve their sport-specific skills.

Which sports require the most skill to play?

All sports require unique skills to play, and most of them are difficult to master, but there are some sports that are regarded as needing more skill to be played well. Among these are sports that require intense precision and accuracy, such as baseball, golf, and tennis. In fact, the seemingly-simple act of hitting a baseball is actually considered one of the hardest skills to master in sports, as it requires incredible accuracy, speed, and reaction time, which must be cultivated over the course of many years.

What non-athletic skills can you learn from sports?

In addition to improving your physical abilities, most people know that sports can also give you valuable life and career skills. Some of these skills include teamwork, leadership, sportsmanship, responsibility, perseverance, the ability to work under pressure, and compassion. Sports can enhance all of these qualities by helping you learn how to coordinate and work with others, accept defeat or setbacks gracefully, and respond calmly and wisely to high-pressure situations.