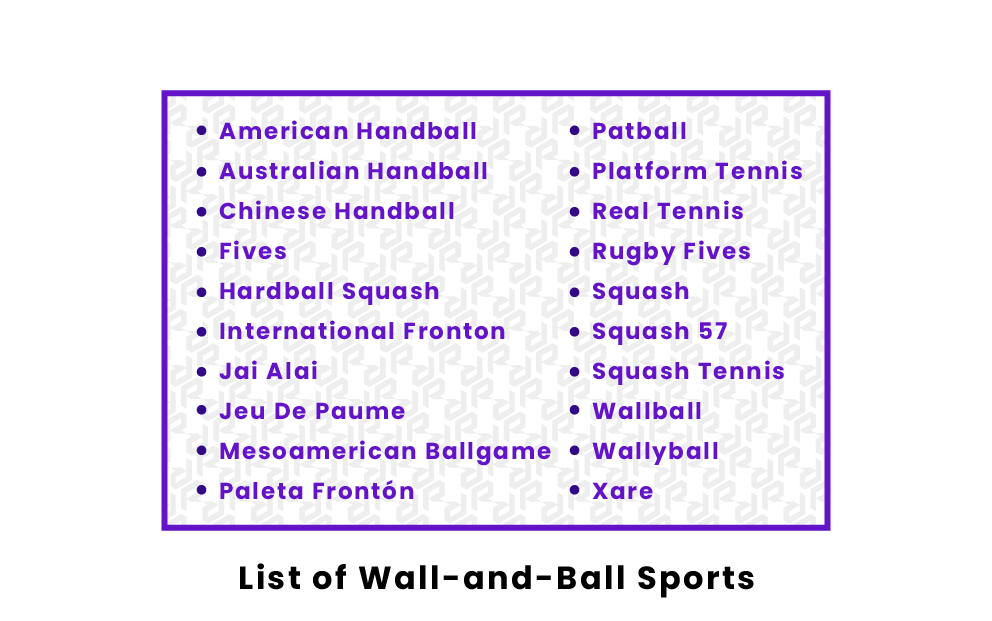 Have you ever played a sport like tennis, badminton, or volleyball and found the gameplay boring or predictable? Then give wall-and-ball sports a try, which incorporate one or more vertical surfaces into the field of play. Walls bring an additional physical dimension to the gameplay and cause the ball to careen unpredictably when bounced off them. Most wall-and-ball sports are played as singles or doubles competitions, but wallyball, essentially volleyball with a wall instead of a net, can be played by teams of up to six people.

American handball, the earliest modern wall-and-ball sport, is the easiest to play, requiring only a ball and a wall. In this type of handball, players must alternately bounce the ball against a wall and back into the field of play without letting it hit the ground more than once. Other sports like racquetball, paddleball, and fronton were inspired by and derived from this version of handball. Jai alai, in which players use handheld baskets to propel the ball, is promoted as one of the fastest ball sports, featuring ball speeds over 180mph (290kph).

What wall-and-ball sports are team sports?

Most wall-and-ball sports can be played as a team sport or an individual sport against a single opponent. This is because, like tennis and other racket sports not requiring a wall, most wall-and-ball sports may be played as a singles or doubles match. Wallyball, a volleyball variant, features teams of two to six players. Jai-alai is played in a round-robin format of up to eight competing teams, but each team is composed of only one or two players.

What are some of the oldest wall-and-ball sports?

What is the most popular wall-and-ball sport?

The most popular wall-and-ball sport is squash, with an estimated 20 million squash players worldwide. In addition, over 5 million athletes play racquetball, which is a wall-and-ball sport similar to squash in equipment and gameplay, but played on a slightly different court. Squash was invented in 1830 by schoolboys in England, and the sport quickly gained popularity across British schools and universities. Throughout the nineteenth century, soldiers spread the sport anywhere they were stationed in the British Empire, which at that time stretched across the globe.

Pages Related to List of Wall and Ball Sports A-Z