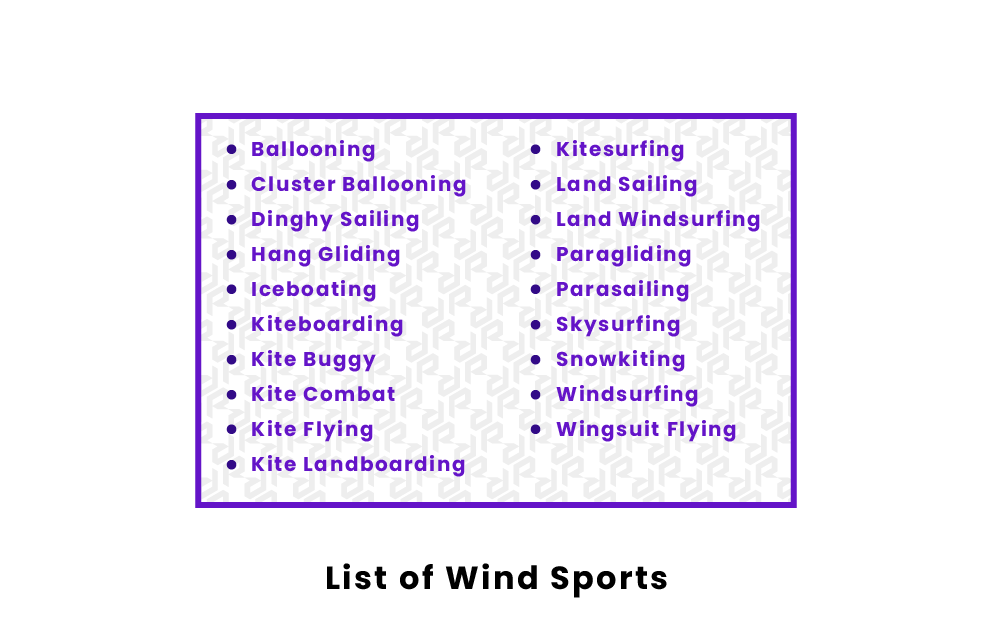 Wind sports are sporting activities that involve wind or air power. Wind sports can be performed in various locations, such as on land, on water, and even in the air, and involve various equipment or devices that enhance the athlete’s ability to perform or serve a function in the sport itself. Many wind sports, such as paragliding and wingsuit flying, are classified as extreme sports. Other wind sports, such as sailing and kite flying, are less extreme but can become more extreme with certain objectives and regulations added on.

Wind sports can be individual or team-based, and many are governed internationally by the Federation Aeronautique Internationale (FAI), founded in 1905, or by other, more localized clubs. Some wind sports, such as windsurfing and sailing, have been included in the Olympic Games, and future wind sporting events, such as kiteboarding, are also planned for future Olympics.

What are wind sports?

Wind sports are sporting events that use wind power to propel people or objects through the air. There are various types of wind sports, some of which occur on land, air, and sea. Some wind sports, such as paragliding, hang gliding, kite flying, and wingsuit flying, can be performed individually, while others, such as sailing, kite combat, and ballooning, are performed in groups. Many wind sports are regulated by the Federation Aeronautique Internationale (FAI) or their own local clubs.

What kind of terrains are wind sports done on?

What are the most popular wind sports?

Some of the most popular wind sports include sailing, kite surfing, windsurfing, and parasailing. Sailing is a wind sport performed in a sailboat on a body of water and can take the form of casual sailing or races. Kite surfing and windsurfing use surfboards with attached sails or a kite to provide propulsion while the surfer balances on the water. Parasailing is a sport where people are suspended from a parachute that is dragged behind a moving boat, which lifts them into the air.

Can it be too windy for certain wind sports?

Wind sports rely on the wind, but sometimes, the wind can be too powerful to perform certain wind sports safely. For example, in sailing, winds that exceed 34 knots (39 mph) can overturn small sailboats, making sailing dangerous. For other wind sports, such as kite flying, it is advised that athletes choose not to fly their kites if the wind gets too strong. In general, winds of 5-12 knots (5-13 mph) are considered good for sailing.