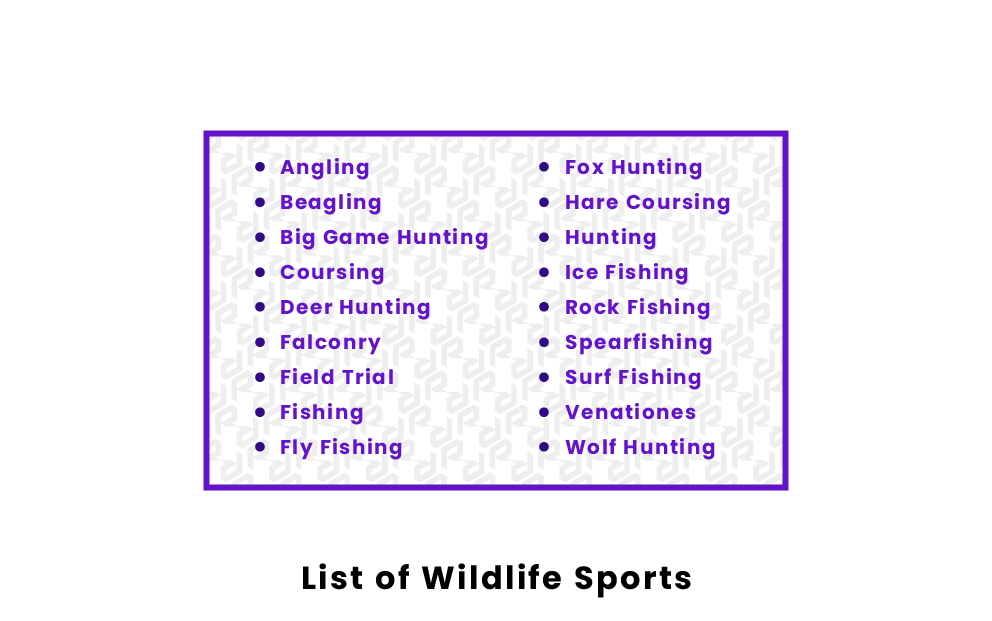 Wildlife sports are sports that involve the hunting or use of animals as a major part of the sport. There are various types of wildlife sports, and each kind involves the use of different sorts of animals. The most common animals that are used as aids in wildlife sports are dogs and birds, which are highly capable hunters and can also be easily trained. However, hunting sports often involve tracking many different types of animals, including deer, foxes, rabbits, and fish.

Wildlife sports are some of the oldest human activities, as hunting was a major source of food for early humans. Over time, as agriculture and livestock herding developed, hunting retained its necessity and became more of a sport that would often be practiced as an activity by members of royalty, such as kings or noblemen. In the modern era, hunting can still be used for survival, but it is much more of a sport, and other wildlife sports have also become more of a recreational activity than an urgent necessity.

What are wildlife sports?

Wildlife sports are sports that involve the use of wild animals. These sports can involve hunting wild animals but often also use certain animals as aids in the sport. Many wildlife sports developed from the need to hunt and incorporate common companion animals like dogs and birds. Common targets of these hunting sports include fish, rabbits, deer, and foxes.

What are the most popular wildlife sports?

The most popular wildlife sports are deer hunting, fishing, and ice fishing. Deer hunting is the most popular hunting sport in the United States, with approximately 10.9 million participants. Fishing is a popular leisure activity worldwide, as it is known for its relative simplicity and its use as a bonding activity. Ice fishing is another popular form of fishing, which involves drilling a hole through ice to reach the water beneath and dropping a line through to bait fish.

What equipment do you need to play wildlife sports?

Various wildlife sports require different equipment. For example, the most common equipment in deer hunting is a rifle or shotgun, hunting knives, and camouflage clothing. For most fishing sports, all that is required is a boat, a fishing rod with line, and bait. Other sports, like falconry, require more sophisticated equipment, such as gauntlets, perches for the falcons, and a hood for the bird’s face. Some wildlife sports, like spearfishing, require bladed weapons.

What wildlife sports are best for kids?

One of the best wildlife sports to start with for children is fishing. Fishing is a relatively easy sport to learn and can be performed in various ways that are safe for children, including some that do not even require going into the water. Fishing also has many interesting and technical concepts that can allow children to learn how to bait, cast, and reel in fish and provides a fun and relaxing family activity that offers little in the way of danger.