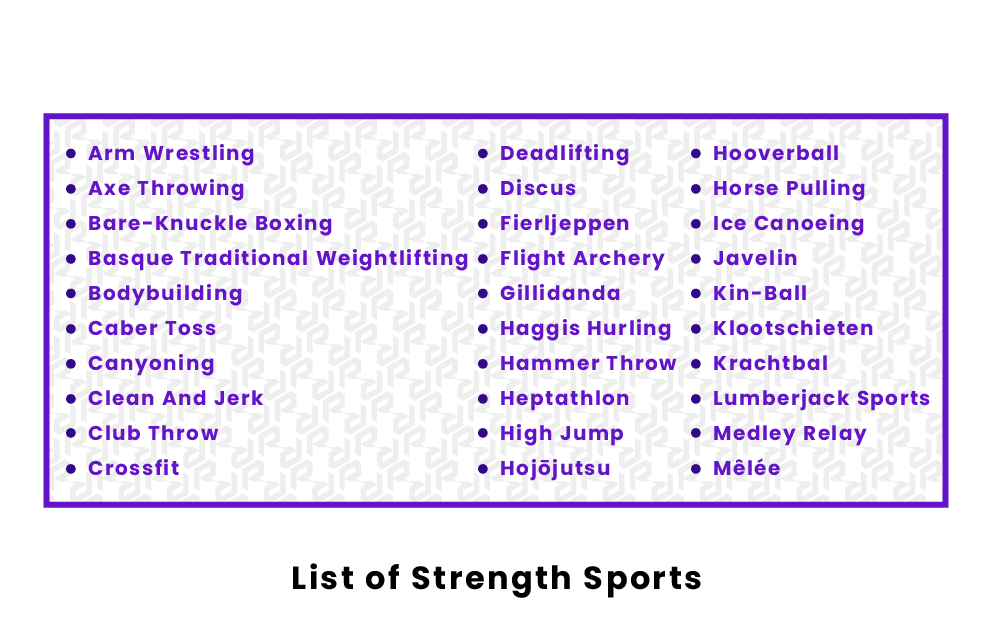 Strength sports are a group of sports centered on muscular strength and endurance, often featuring seemingly impossible amounts of weight being lifted, pulled, or thrown at the highest levels of competition. At times, these strength sports involve direct head-to-head competition to determine which competitor is stronger, with some examples being tug-of-war and arm wrestling. Some of the most common forms of strength sport include bodybuilding, functional fitness, weightlifting, powerlifting, and strongman.

The first official strength competitions took place at the 1896 Olympics in Athens, Greece. At this event, there was a one-handed and two-handed lift. This category of sport has progressed a lot since then. Today, a global event called the World’s Strongest Man is one of the most popular strongman competitions in the world. Hafthór Júlíus Björnsson has been one of the most successful strength sport athletes in recent years and has won multiple strongman competitions throughout his career.

CrossFit is a far more accessible type of strength sport that consists mostly of aerobic exercises and calisthenics to build strength, conditioning, and overall fitness. Since its introduction in the early 2000s, CrossFit has developed around 4 million participants across the globe. Across the board, strength sports have become a lot more popular since their inception, despite their demanding nature.

What are strength sports?

Most strength sports require competitors to lift, pull, or throw some amount of weight that requires a display of physical strength. With so many different forms of strength sports, there is a wide variety of options to suit anyone’s interests and abilities.  Some strength sports are more endurance related, while others are more so a matter of quick bursts of maximum strength. Strength sports use many different types of equipment, with the most common being some form of weight that athletes lift, push, throw, or pull. In some instances, this means a head-to-head competition pitting two athletes up against each other in a match of strength.

What are the most popular strength sports?

The most popular strength sports include powerlifting, Olympic weightlifting, CrossFit, and strongman. Powerlifting competitions involve athletes seeing how much weight they can lift in three exercises: squat, bench press, and deadlift. In Olympic weightlifting, competitors try to lift the most weight in the snatch and clean and jerk routines. In CrossFit, competitors take on a variety of weight lifts and exercises through a racing format. Strongman involves various weightlifting events that focus on brute strength.

Which strength sports are in the Olympics?

Olympic weightlifting is the only strength sport in the Olympics with its own category. In this sport, athletes are grouped by their body weight. In addition, they can compete in the snatch or clean and jerk. The snatch requires athletes to lift a bar above their heads in one motion. The clean and jerk requires athletes to bring the bar to their chest first in one motion and then bring the bar over their head in another motion. In addition, the strength sports shot put, javelin, discus, and hammer throw are all included within the athletics discipline at the Olympics. In these events, athletes throw various heavy apparatuses as far as possible while competing for the furthest throw.

Which strength sports are the best exercise?

Different strength sports are better for certain parts of the body. Overall, CrossFit is considered to be one of the best strength sports for overall exercise. In CrossFit, athletes have to demonstrate a combination of brute strength and endurance. Some of the more intense CrossFit workouts can make athletes burn as many as 480 calories in one hour. CrossFit is high in intensity compared to other traditional strength sports such as weightlifting. Traditional bodybuilding is another great way to exercise, focusing on gaining muscle mass as opposed to improving cardio. Athletes can really strengthen specific muscles when participating in bodybuilding. An athlete who practices bodybuilding intensely can burn as much as 250 calories in 30 minutes.