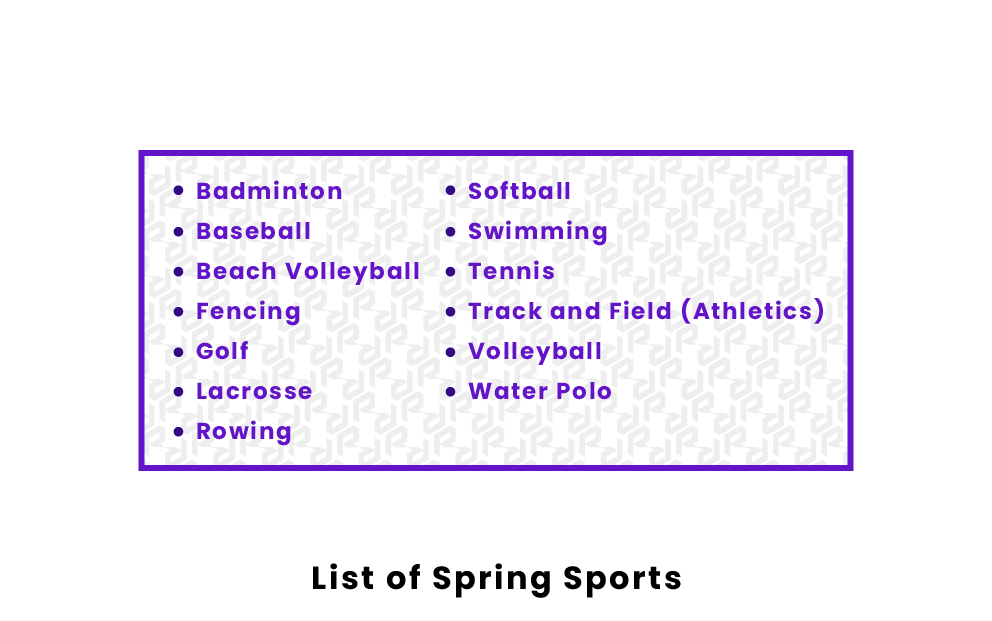 Spring sports is a very broad name that encompasses a ton of sports that aren’t very similar. Their one connection is that they are all played primarily during the spring season. Specifically for schools based in the United States, the academic year is typically divided into two halves: the fall and spring semesters.

The fall semester usually starts in August and goes through December, covering some of the autumn and winter seasons. The spring semester starts in January and lasts until May or June, taking place from the end of the winter season through spring. The spring sports listed here are known as such because, in organized academic settings, they are active during this second semester. In the warmer months, the weather is a little more agreeable for outdoor sports, which most of these are. This explains why these sports are saved for nicer weather, as opposed to colder seasons.

What are spring sports?

Spring sports are sports in which schools typically compete during the spring semester. Of course, the sports offered can vary by state and even further by the school district, but those listed here are pretty standard representations of the sports available at most schools in the spring. Some of them, like golf, lacrosse, and softball (among others), are strictly outdoor sports, while others can be played indoors as well.

What are the most popular spring sports?

Certain sports may not be as accessible as other sports because, as mentioned above, the availability of a sport is largely determined by location. However, soccer is the most popular spring sport; it is also the most popular sport in the world. Most schools offer baseball, softball, and track and field. Since they’re so readily available, these are also popular spring sports. They’re just as fun to play as they are to watch, so finding a team and getting involved shouldn’t be too difficult.

Are there any sports that are played in both the spring and fall?

A lot of this depends on where you live, but in some places, volleyball and track and field are played in the fall. Volleyball is an indoor sport, meaning that the weather does not affect the game. This provides some leniency for when the sport can be played. Track and field activities are usually held outside, but sometimes, there’s an indoor season that takes place in the fall.

How does the weather affect spring sports?

A lot of spring sports take place outdoors, so the weather can greatly affect whether or not a sport can be played safely. The spring season is known for its rain showers, and this is something that most spring sports are prepared to deal with; however, when those showers turn into storms with heavy thunder and lightning, it becomes too dangerous for most outdoor games to continue. While a little more rare, extremely hot temperatures can also create unfavorable conditions that are considered dangerous, affecting spring sports.