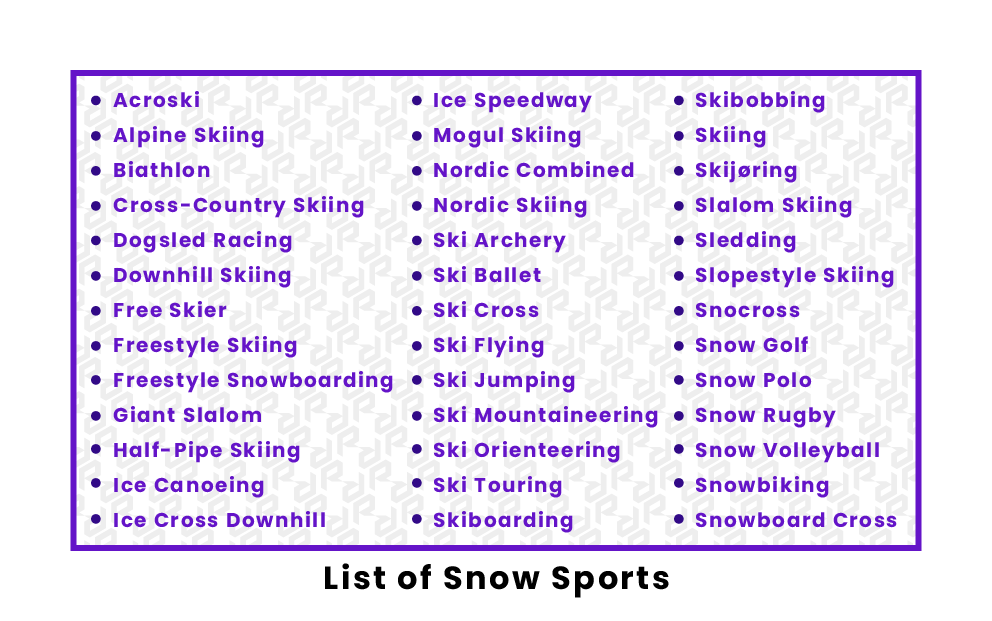 Snow sports are sports that take place on snow and ice, often during the winter months. Many snow sports involve riding on snow with specialized tools such as skis, snowboards, or sleds. The objective of most snow sports is to complete certain tasks on the snow, such as tricks, races, or running certain obstacle courses. Some snow sports, such as the biathlon, incorporate shooting into their activities, while others, such as snow golf, snow rugby, and snow volleyball, take other popular sports and incorporate them into snow.

What are snow sports?

Snow sports are sports that are performed on snow, often making use of special tools, such as snowboards or skis. Most snow sports involve some form of task, such as running a race or obstacle course and occasionally performing tricks. Snow sports are mostly performed during the winter months, and are popular recreational and professional activities. Many snow sports are a part of the Winter Olympics and have given rise to many famous athletes over the years.

Where are the best places in the world for snow sports?

There are many popular locations across the world for snow sports like skiing, snowboarding, and sledding. Some of the popular sites in the United States include Aspen and Beaver Creek in Colorado, Mammoth-Yosemite in California, and Skagway in Alaska. Popular snow sport destinations around the world include Courchevel 1850 in France, the Dolomites in Italy, and Asahi Dake in Japan.

What are the most popular snow sports in the world?

Some of the more popular snow sports at both the amateur and professional levels include snowboarding and skiing.  Snowboarding is very popular because of the wide variety of tricks that can be performed, including exciting jumps, spins, and landings, which often involve the use of halfpipes. Skiing is a popular and fun activity for individuals and families, as it is very exciting and fast-paced, though it requires great coordination and balance.

Which Winter Olympic sports are played on snow?

Olympic snow sports are divided into two categories: alpine/skiing/snowboarding events and Nordic events.  In the first category, there are events in alpine skiing (such as the downhill, the giant slalom, and the super combined), freestyle skiing (such as aerials, moguls, and ski cross), and snowboarding (such as the halfpipe and the slopestyle). Sports in the Nordic events category include the biathlon, cross-country skiing, ski jumping, and the Nordic combined, which merges ski jumping and cross-country skiing.