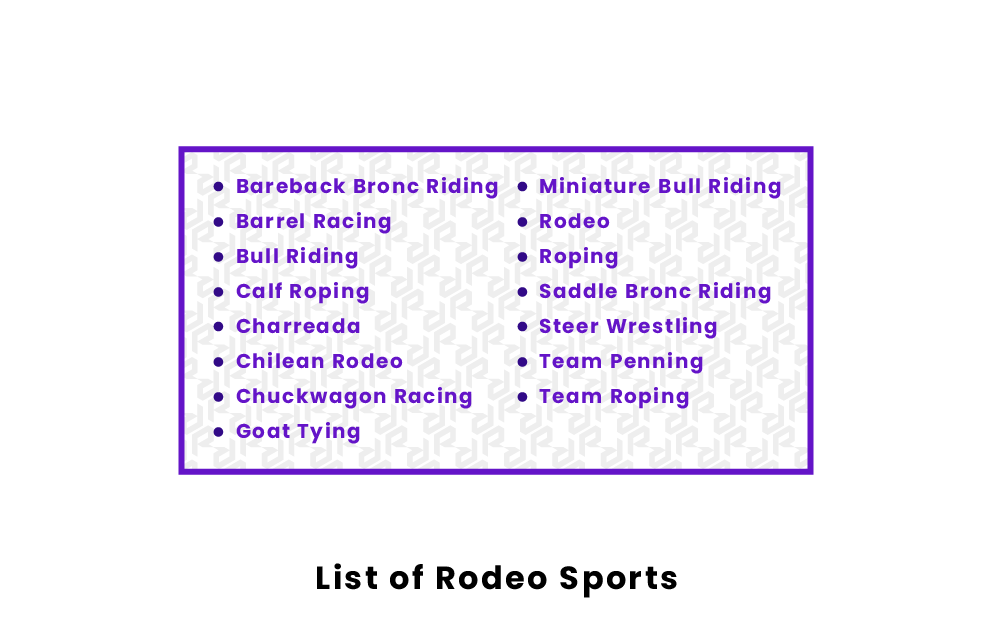 Rodeo sports consist of contests of riding an animal and using a rope. Their development as a sport started in Mexico, United States, and Western Canada in the early 1800’s but has influence from Spain. There are two types of events for rodeo sports: roughstock events and timed events. During roughstock events, the person riding the cattle, called a cowboy, is judged based on time and performance on the bull. Timed events compete mainly against the clock but also against the other competitors. A popular rodeo event, called “Rodeo New York,” takes place at Madison Square Garden in New York City for about a month before making its way up to Boston for two weeks. The first annual rodeo started on July 4, 1888, in Prescott, Arizona. Other cities followed and made their own annual rodeos like the Pendleton Round-Up in Oregon, which started in 1910. In 1910, rodeo officially became recognized as a legitimate sport.

What are rodeo sports?

Rodeo sports were created based on the skills of herding cattle. The competitors compete in speed events, skilled events, timed events, and roughstock events. Some of the events they compete in are: calf roping, steer wrestling, saddle bronc, bull riding, and barrel racing. All the events that athletes compete in involve a type of livestock, usually a bull, and a rope.

Where are rodeos banned?

There are two countries where the government outright banned rodeos: the United Kingdom and the Netherlands. There are also a few cities in the United States that have banned rodeos completely, including Pasadena, California, and St. Petersburg, Florida. Some cities in Canada, like Vancouver and Surrey, also placed a ban on rodeos. There are also some countries that are currently trying to ban rodeos, like New Zealand. These nations and cities have banned rodeos in large part due to the animal cruelty and injuries that these sports can cause to animals and athletes.

What are the most popular rodeo sports?

The most popular rodeo sport is bull riding. It started in 1910 when it split off from bronc riding. Bull riding is where a cowboy, the contestant, attempts to ride a full grown bull for at least eight seconds. The cowboy has to hold onto the rope with one hand and cannot touch himself, the bull, or the rope with the other free hand, or else they will be disqualified. The cowboy is also disqualified if he falls before the eight seconds is up. The contestant is judged based on their ability to stay on the bull, how well they ride the bull, and by the bull’s power and movements.

What is the most dangerous rodeo sport?

Along with being the most popular rodeo sport, bull riding is also the most dangerous type of rodeo sport. A bull rider is ten times more likely to get seriously injured than a football player. Getting stepped on or hit by a multiple-ton bull can kill someone or break at least 30 bones in a person’s body. Protective vests and helmets are utilized to prevent injuries. However, this is only required for professional bull riders.