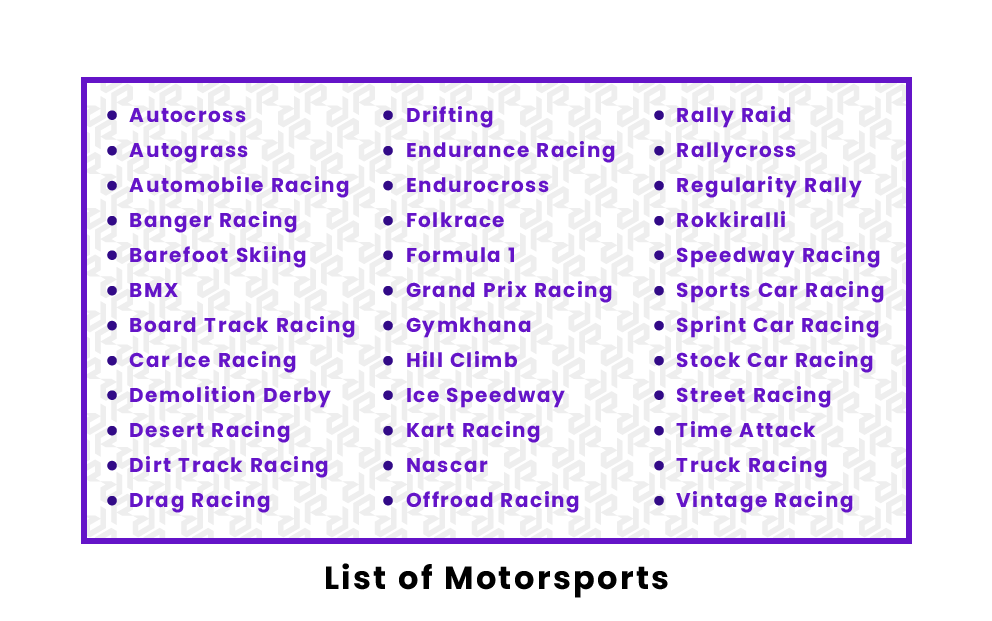 Motorsports are some of the most thrilling and dangerous sports in the world. With the use of one of a variety of motorized vehicles, motorsport athletes travel at speeds much higher than those achieved in sports that rely on human or animal power for propulsion. Only a few years after automobiles first became commercially available, drivers began using them to compete against each other. The first organized race was held in 1894 between Paris and Rouens, France. Since then, motorsports have continually increased in speed, complexity, and popularity.

In addition to automobile racing, international governing bodies also exist for motorcycle racing, powerboat racing, and airplane racing. Most motorsports are individual competitions that declare a single athlete the winner. In motorsports, the first, second, and third-place finishers are referred to as the podium winners. Although they are competing individually, many motorsport athletes are part of teams. Teammates can help each other gain strategic advantages, and an individual victory is often considered a win for the team.

Motorsports are any sports in which athletes travel through space with the aid of motorized vehicles. The most commonly used vehicles in motorsports are automobiles, motorcycles, motorboats, and airplanes. Most motorsports are timed competitions, typically races, time trials, or speed runs. Automobile racing is the oldest and most popular form of motorsport; popular series include Formula 1, NASCAR, Indycar, and IMSA. Other motorsport competitions assess skill in addition to speed, such as tractor pulling, drifting, freestyle motocross, and demolition derby.

What motorsport involves the fastest vehicle?

The motorsport involving the fastest vehicle is the Jet Class of the Championship Air Races, held yearly in Reno, Nevada. For over fifty years, pilots have flown air races over the Nevada desert in an oval track at an altitude of fifty to 100 feet. Seven different classes of aircraft compete, but the Jet Class is the fastest, with race speeds exceeding 500mph (805kph). The fastest vehicle used in land motorsports is a Top Fuel series drag racing car, which regularly tops 325mph (523kph) in competition.

Motorsports are among the most dangerous sports in the world, particularly with respect to fatalities. Organized motorsports employ extensive rules and regulations, and race officials are stationed throughout the course to maximize safety among competitors and fans. However, due to high speeds and force levels, motorsports remain inherently dangerous. The most dangerous course in motorsports is the Snaefell Mountain Course in the Isle of Man. Home to two famous motorcycle races, it has claimed over 230 riders’ lives since the competition began there in 1911.

What are the most popular motorsports in the world?

Automobile racing remains the most popular form of motorsport, and Formula 1 and NASCAR are two of the most widely watched series. Formula 1 races are run by open-wheeled cars on circuits around the world. Since Formula 1 holds worldwide competitions, it commands a larger following than NASCAR, which only competes in North America. Other beloved automobile series are Indycar, IMSA, V8 Supercars, and WRC. Motorcycle racing is also very popular, with MotoGP, Superbike, and motocross being among the most prominent disciplines.