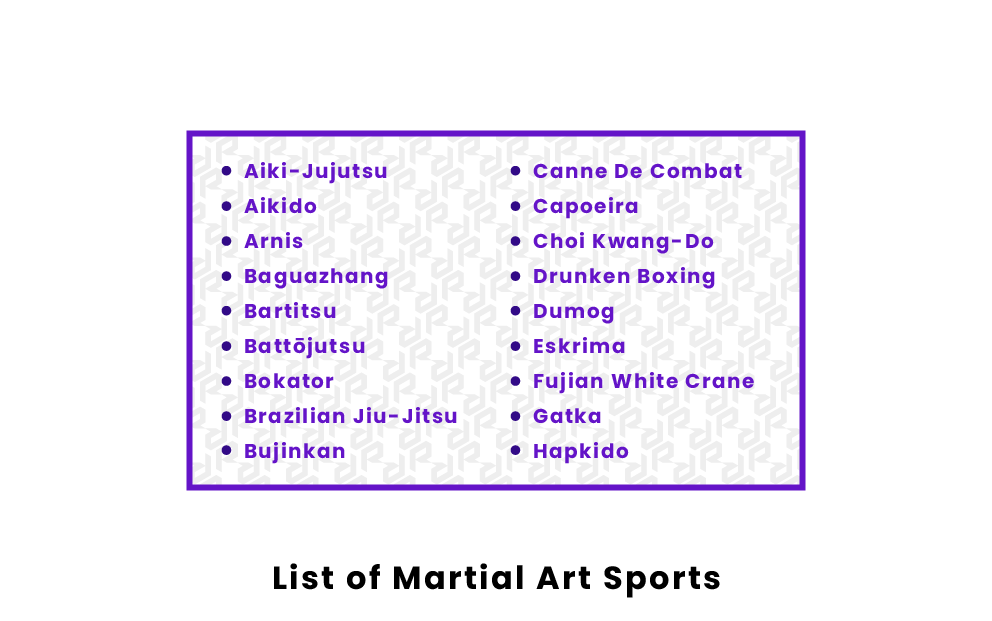 Martial arts are made up of various sports, skills, and systems of combat. While each type of martial arts has a different style, most have the same purpose: self-defense. The word “Martial” is derived from the Greek God Mars, the God of War. Martial arts date back to 600 BC, as all people engaged in fighting and war to survive. According to legend, Indian monk Bodhidharma was the first to teach many of the philosophies and lessons found in martial arts.

The various martial arts can be put into five different categories: stand-up skills, grappling styles, low-impact styles, weapons-based styles, and MMA (Mixed Martial Arts). MMA is a more modern form of martial arts and mixes together some of these different styles. The most well-known martial art fighter is Bruce Lee, who truly popularized the genre of sport. The first famous figure in martial arts was Itosu Anko, who is widely considered “The Grandfather of Karate.” He lived from 1831-1915.

What are martial arts?

How many martial arts are in the Olympics?

There are six martial arts in the Olympics. The six martial arts featured in the 2020 Olympics were boxing, fencing, judo, karate, taekwondo, and wrestling. Wrestling in the Olympics is broken down into two different disciplines: freestyle wrestling and Greco-Roman wrestling. While karate was present in the 2020 Olympic Games, it will not be featured again at the 2024 Olympics in Paris. The host country of the Olympics gets to decide the sports included, so this list has changed over time and will continue to change moving forward.

What are the most popular martial arts in the world?

Currently, MMA is the most popular martial art in the world, as there are professional leagues and a large number of people watch matches on live television. Karate is also very popular due to its history and constant relevance around the world. Taekwondo is rising in popularity as well, as it is a relatively new Olympic sport. Judo and kung fu are also very popular, mostly in the eastern hemisphere of the world.

Which martial arts are the best for self-defense?

Almost all martial arts have roots in self-defense, however some are definitely better suited for self-defense than others. Brazilian jiu-jitsu, Muay Thai, and krav maga are the top martial arts for self-defense. Brazilian jiu-jitsu uses leverage to over-power strength, so size is much less of a factor. Muay Thai is also known as “The Art of Eight Limbs,” as elbows and knees are often used to fend off attackers. Lastly, krav maga teaches quick retaliation techniques to attack vulnerable parts of the human body, like the eyes and groin.