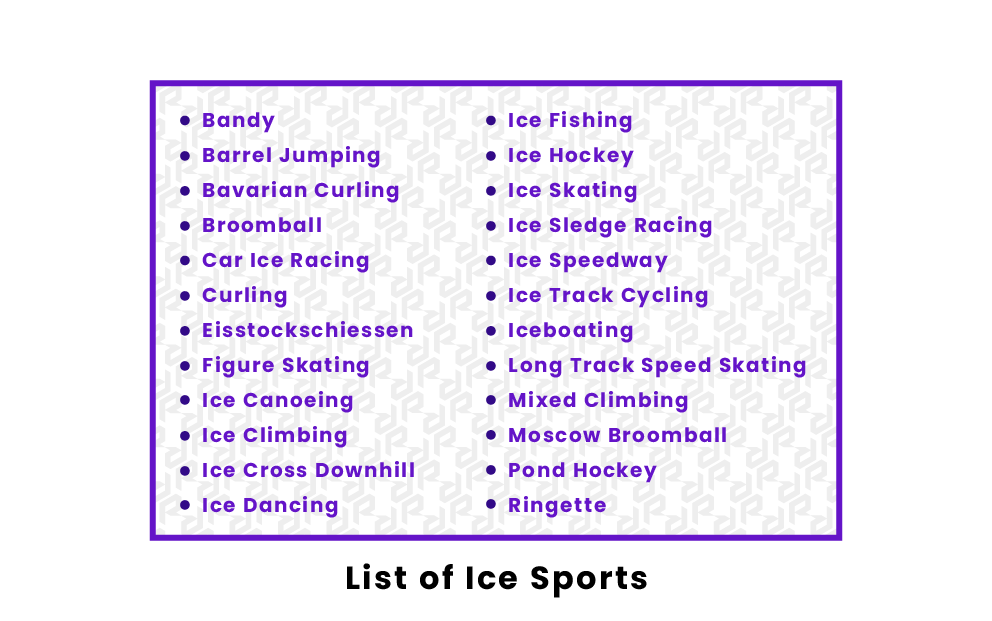 Around the world, athletes practice and compete in a wide variety of ice sports. Ice sports consist of many different activities that occur either on an ice rink, in the snow, or in some other kind of cold environment. Some ice sports are team events or can be played in a group, while others only have individual competition.

Some ice sports have been played for centuries. Humans have utilized both sleds and skates for competition as well as travel since ancient times. Over time, different sled and skate sports have continued to develop. Curling, for example, has been played at least since the 16th century in Scotland, according to historical artistic depictions.

Other than the Winter Olympics and Paralympic games, there are other large worldwide competitions for ice sports. Both the Arctic Winter Games and Asian Winter Games are multi-sport events that many ice sports athletes compete in. Read more to learn more about the different types of ice sports.

What are ice sports?

Ice sports encompass any sport that is either played on an ice rink or has some sort of affiliation to ice with it. For example, snow golf is played on snow rather than grass, and ice climbing is when people climb various geographic landscapes covered in ice. There is a wide variety of ice sports that can highlight different skills and integrate other kinds of sports, such as ice canoeing. Some ice sports can only be played outdoors in cold environments, while others can be played year-round in an indoor setting.

What are the most popular ice sports?

In the United States, ice hockey, figure skating, and curling tend to be some of the most popular ice sports. Not only are those three ice sports played in the Winter Olympics however, they are highly accessible to learn and play in different regions around the United States. Many high schools and colleges in North America have ice hockey or curling teams. Furthermore, most ice rinks in cities or towns have figure skating lessons or competition teams for a variety of people to participate in.

Which ice sports are played in the Olympics?

What ice sports can be played year-round?

Any ice sport that takes place on an indoor ice rink can be played year-round, as long as athletes have access. If they utilize an outdoor ice rink, athletes may only be able to play ice sports in the winter. Popular ice sports, including figure skating, ice hockey, and curling are frequently practiced at indoor ice rinks by teams and individuals at any point throughout the year. However, sports like ice climbing that require outdoor elements may not be accessible year-found unless you are able to travel to specific regions with winter conditions.