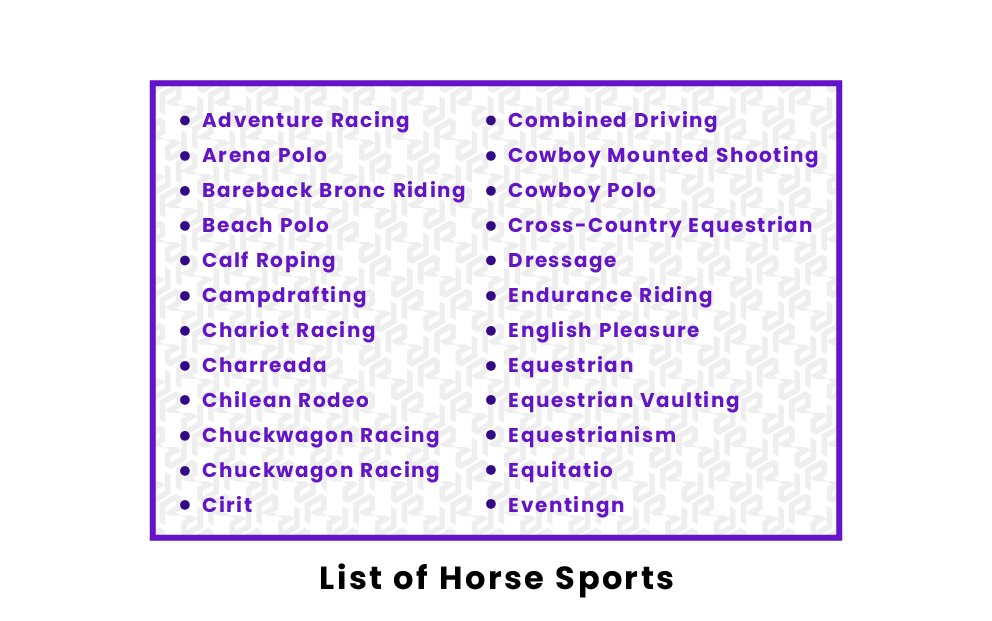 Horse sports involve the riding and competition of horses. Dozens of sports involve horseback riding, and such sports have a long history. Most horse sports began with military operations, stemming from the ways horses and soldiers would move around on the battlefield. In fact, records of horseback riding even exist in Ancient Greece, as far back as 360 B.C.E. Over time, these military practices developed into sports performed on horseback, such as jousting, and eventually became the sports we know today.

There are different objectives in different sorts of horse sports. Some, such as horse racing, simply involve having the fastest horse. Others, such as jousting, involve knocking your opponent off of their horse. One of the most popular horse sports today is horse racing. Races such as the Kentucky Derby draw huge crowds and have starred famous horseback riders, called “jockeys”, such as Bill Shoemaker, Lester Piggot, and Victor Espinoza.

What are horse sports?

Horse sports include any sport which involves the riding of horses in some form of competition, event, or race. There are many different kinds of horse sports, from horse racing to jousting to show jumping. Some horse sports involve point-scoring games, such as polo, while others are based on the speed, grace, or athleticism of a horse, such as in racing or show jumping. Horse sports have a long history and have been practiced since humans first domesticated horses.

What are the most popular horse sports in the world?

There are many popular horse sports that are known around the world. Among the most popular are dressage, eventing, and horse racing. Dressage involves leading a trained horse through a sequence of events, which are judged by how well the horse performs them. Eventing, also called triathlete, is a combination of dressage, jumping, and cross-country, testing a horse’s endurance. Horse racing is a race around a track to determine which horse is the fastest.

What are the different categories of horse sports?

What is the oldest horse sport?

Two of the oldest known horse sports are polo and horse racing. Polo was originally developed in India and was used as a training method for soldiers on horseback. Meanwhile, horse racing is another ancient horse sport. Many types of horse racing, such as chariot racing, were known in many cultures, from Ancient Egypt to Ancient Greece and Ancient Rome. Both of these sports still live on in modern cultures and are very popular today.