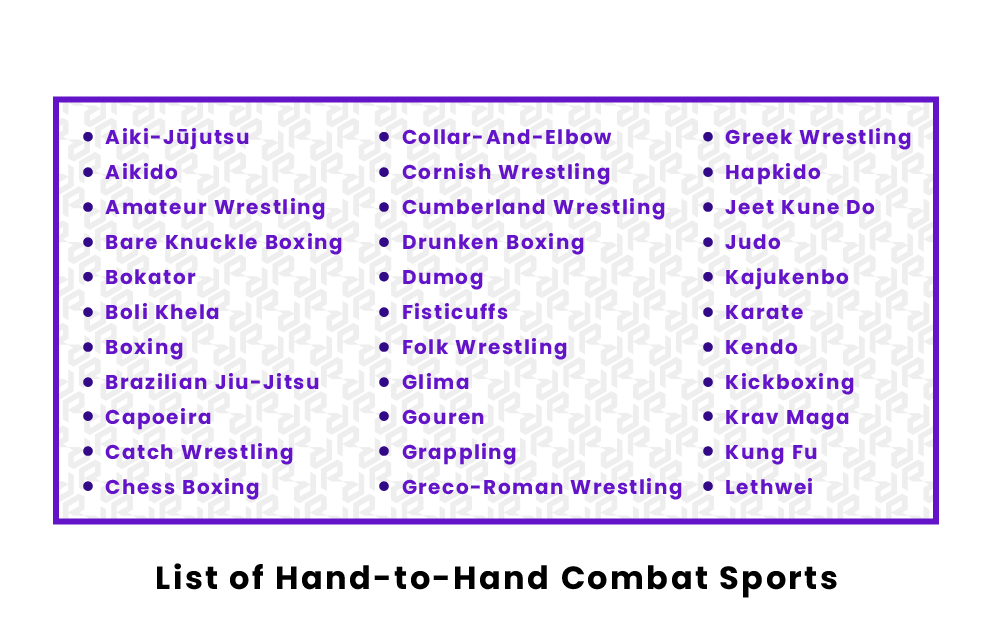 Historians believe hand-to-hand combat sports have existed since 350 BC, based on when the first Asian martial arts texts found in ancient literature were dated back to. The term hand-to-hand combat sports refers to any sport where the participants are limited to only their fists and protective gear such as boxing gloves or head guards. Typically it is a one-on-one contest with an opponent, and each discipline has its own scoring and rule system in place.

What is a hand-to-hand combat sport?

A hand-to-hand combat sport can take shape in various styles and have different appearances. Almost all l include the common theme of attempting to outmatch an opponent's strength or skill in a specific fighting discipline or style in a regulated contest. This applies to boxing, wrestling, and MMA, which compose some of the easiest to identify combat sports. Hand-to-hand contests have been a staple of human culture, and many disciplines have roots reaching far into history.

What hand-to-hand combat sports are played in the Olympics?

Olympic events have historically included hand-to-hand combat sports since the contest’s early beginnings in Ancient Greece. Today, the Modern Olympic Games holds five total hand-to-hand combat sporting events, all taking place during the summer games.  Palẻ, which is Greek for wrestling, was added to the Ancient Olympic Games in 708 BC with Pygmachia, Greek for boxing, following in 688 BC. Before the 1964 Tokyo Olympics, Judo was added, and following this, Taekwondo and Karate also debuted as new events in the 2000 Sydney Olympics and 2020 Tokyo Olympics, respectively. However, Karate’s tenure as an Olympic sport was short-lived as it will not be featured in the 2024 Summer Games.

Due to the often violent nature of hand-to-hand combat sports, they are dangerous, and there is a potential risk for serious injury. MMA explicitly has very few rules, and injuries such as cuts, bruises, and even broken bones are commonplace. Other hand-to-hand combat sports like boxing pose a risk for concussions or even severe head trauma, so proper training and protective gear are necessary. Even with adequate coaching and precautions, the risk for injuries is still possible.

What are the most popular hand-to-hand combat sports?

Hand-to-hand combat sports such as MMA, Boxing, Brazilian Jiu-jitsu, and Karate are all extremely popular on a global scale. However, which sport remains the most popular varies depending on geographic location and culture. Boxing originated in 1867 in the United Kingdom and held immense popularity before evolving into what we know it as today. Recently, MMA has come a long way and, with it drawing inspiration from the practices of various martial arts disciplines, has grown to reach massive popularity and success. In 2019 alone, MMA generated close to $900 million in revenue.