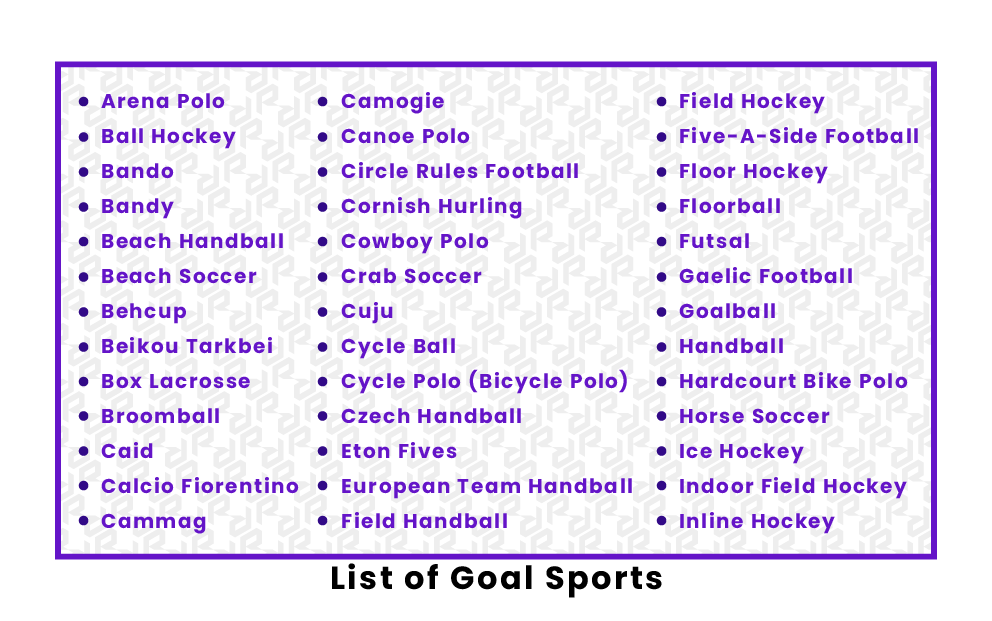 Goal sports consist of two teams trying to score either a ball, puck, or other objects into a goal. Typically, goal sports include a goalkeeper to block the goal and make it more difficult to score. Goal sports are played all around the world and come in a wide variety. Some of the most popular goal sports are soccer, hockey, lacrosse, and handball. Soccer, handball, field hockey, and water polo are all in the Summer Olympics. Ice hockey is the only goal sport featured in the Winter Olympics. Soccer has its own international event called the World Cup, which is the largest soccer tournament in the world. Goal sports can be found in massive leagues throughout Europe, the United States, and the rest of the world. A lot of these famous sports have different variations that are played in certain countries on a smaller scale, including underwater hockey, cycle ball, and hardcourt bike polo.

What are goal sports?

Goal sports are a form of sport between two teams with the objective of getting a ball, puck, or other objects into a goal to score points. In many of these sports, there is a player in the goal, called a goalkeeper, attempting to block the object from getting in the goal. The team that scores the most goals in an allotted time wins the game. Goal sports have many different rules and playing fields, with millions of people playing them worldwide each and every day. Some of the major goal sports are soccer, hockey, water polo, and lacrosse.

What goal sports are in the Olympics?

What are the most popular goal sports in the world?

Soccer is by far the most popular goal sport in the world. It is featured in the World Cup, one of the most-watched sporting events in the world on an international scale. There are massive leagues like the Premier League and the La Liga in countless countries. The two main disciplines of hockey, ice hockey and field hockey, are also wildly popular worldwide. Ice hockey has a very large following in North America due to the National Hockey League (NHL), which attracts players from around the world. Both ice hockey and field hockey are Olympic sports, in the Winter and Summer Olympic Games respectively.

What are the biggest goal sports competitions in the world?

The World Cup is the largest global competition for soccer, while the Olympics is the largest for handball, field hockey, ice hockey, and water polo. These events only happen every four years and are considered a celebration of the best athletes in their respective sports, in which the biggest stars the game has to offer compete for their nations. Around 1.1 billion people tuned in for the France and Croatia World Cup Final in 2018, demonstrating the jaw-dropping viewership that the sport has internationally. The 2020 Tokyo Olympics captured millions of viewers from all around the world as one of the most streamed events to date. Athletes train for years to compete in these events with dreams of getting to the top of the podium with the world watching.