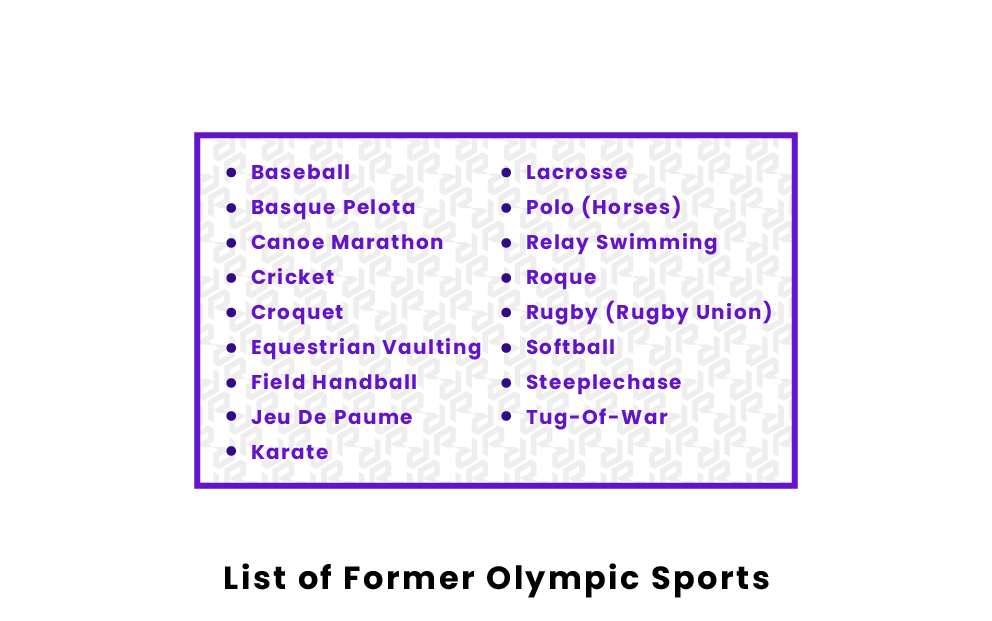 Former Olympic sports are sports that were at one time included in the modern Olympic Games but were eventually removed as events from the following Olympics. Many different sports have been added to and taken away from the Olympics over the years, coming from various categories, such as ball sports like baseball, cricket, and field handball. Other removed Olympic sports were feats of strength or martial arts, such as tug-of-war and karate, and still, others were team-based sports like lacrosse, rugby union, and polo.

Many former Olympic sports were removed from the list of Olympic events due to their level of popularity. For a sport to be a good candidate for the Olympic Games, it must be popular in many different countries, enough so that many nations can easily form teams of athletes to represent them in that sport and compete at a high level. If a sport is only popular in a select few countries, it will not be included in the games, as too few nations would be able to participate.

What are former Olympic sports?

Former Olympic sports are sports that were once a part of the Olympic Games but are no longer included as events. Certain sports are removed from the Olympic Games because of waning international popularity, while others are added or removed often based upon how well they can be integrated into the games. There are many categories under which these former Olympic sports fall, from ball games to physical contests to team sports.

What are the most popular former Olympic sports?

Some of the most popular former Olympic sports include rugby, tug-of-war, baseball and softball, and polo. Rugby is an extremely popular European sport but only became so in the 20th Century. It was featured in the early modern Olympics of 1900, 1908, 1920, and 1924 but was dropped afterward and only reintroduced as rugby sevens in 2016. Tug-of-war was an Olympic event from 1900 to 1920. Baseball and softball, popular in America, were added in 1992 but dropped when the Major League Baseball season conflicted with Olympic scheduling, only to return in 2020. Finally, polo, a major European sport, was played in five Olympics in the years 1900, 1908, 1920, 1924, and 1936.

Which sports were removed from the Olympics most recently?

The most recent removal of a sport from the Olympic Games is the removal of baseball, softball, and karate from the 2024 Paris Games.  Before this removal, baseball and softball were included in the 2020 Tokyo Games, after previously being dropped from the 2012 Summer Olympics in London. This 2012 removal occurred due to the fact that professional baseball players would often not participate in the games, as their timing conflicted with the Major League Baseball season in North America. Meanwhile, karate appeared at the Olympics for the first time in 2020 but will be removed immediately in 2024. Before 2012, the most recent sport dropped from the Olympics was polo, which was discontinued in 1936.

Which former Olympic sports have the best chance of being added back?

Whether or not certain discontinued Olympic sports are added back to the games depends upon the voting of the International Olympic Committee (IOC). The IOC often votes on proposed sports for the Olympic Games, considering questions such as: how long the sport has existed, how it will add to the Olympics’ legacy, and how difficult it would be to broadcast. One of the most recent votes, in June 2015, had a list of several sports for the IOC to consider, including former sports such as baseball and softball, karate, and polo. The 2015 votes resulted in baseball, softball, and karate all returning to the 2020 games, so it is possible that polo, which was also on the list, could someday return to the games.