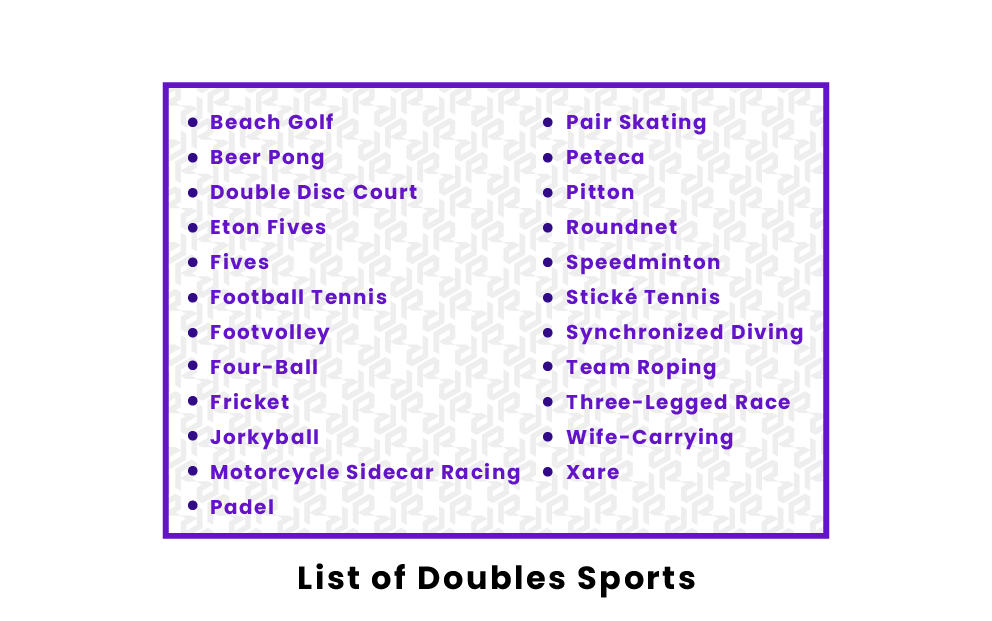 Doubles sports are any sports that require two people to compete together. This pair faces off against other pairs, so the team of two wins or loses as a singular unit rather than as individuals. Plenty of sports come in a doubles variety. As our list indicates, doubles sports can be anything from beach volleyball to beer pong or ice dancing. Beach volleyball is similar to indoor volleyball, except it’s played outdoors in the sand, and there are only two athletes on the court for each team rather than six. Beer pong requires a table or flat surface, cups, and ping pong balls. Ice dancing is similar to figure skating in the sense that routines are performed on ice but allows participants to compete simultaneously, often including synchronized routines. The sport itself changes, but the number of people required to compete remains the same across the board.

What are doubles sports?

Doubles sports are those that involve two competitors on each side, working together. This is the only necessity for any given sport to be deemed a doubles sport. Everything else, like the sport itself or the rules of the sport, can change as they do with synchronized diving or table tennis, for example. The most important part is that there are two people working together against two opponents.

What are the most popular doubles sports?

What are the best doubles sports for kids?

Three-legged race is a great doubles sport for kids. It doesn’t require any real playground, and most kids are already somewhat familiar with it. This game is often a staple of fairs and school field days because the only equipment is a start and finish line, teams of two, and some sort of tether. If races aren’t really your thing, pickleball could also be a great sport for kids. It has elements of tennis, badminton, and ping pong but isn’t quite as difficult.

What doubles sports are played in the Olympics?

Naturally the events can change from year to year, but here is a list of doubles sports that are currently a part of either the Summer or Winter Olympic Games: