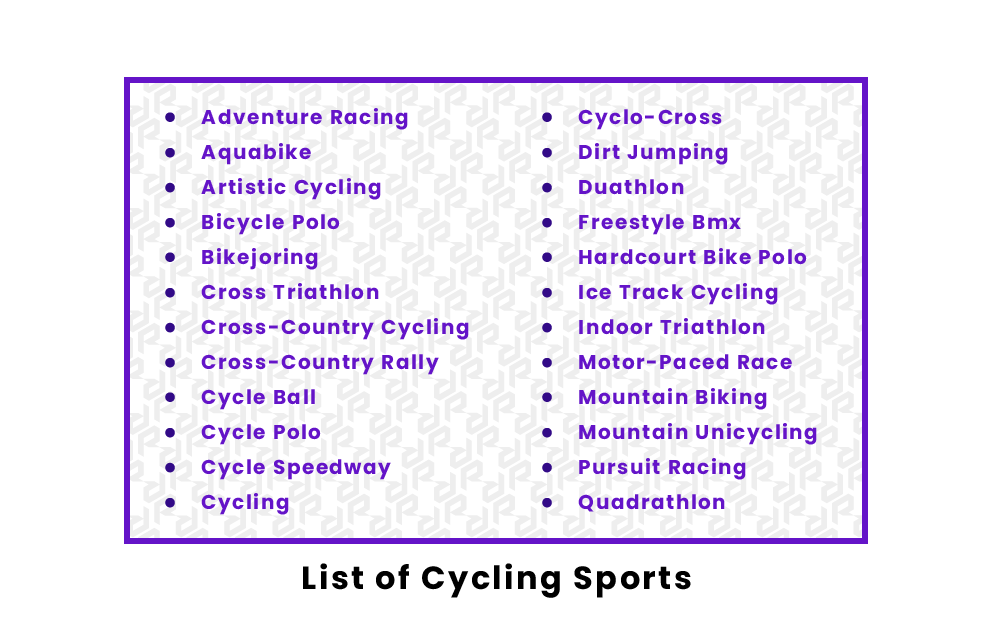 Cycling as a sport encompasses various events and utilizes different kinds of bikes as needed. In 1884, Thomas Stevens created the bike style we know and use today. Most bike races either focus on finishing first with the fastest time or endurance tests to see how far they can ride. The 1st organized cycling race occurred on May 31, 1868, with a 1,200-meter race between the European cities of Paris and Rouen.

One of the most famous cycling events now is the Tour de France, founded in 1903. The race is one of the most significant endurance tests in cycling. The first man to ever win the Tour de France was Maurice Garin. Other major cycling competitions include the Olympics, which holds four cycling events, including track cycling, road cycling, mountain biking, and BMX.  Today over 100 million bikes are made each year, and it is a rapidly growing hobby and competitive sport for those who want to get some exercise and enjoy the outdoors.

What are cycling sports?

Cycling sports include any competitive or recreational sport that mainly depends on the function of a bike. These events may be race-style in nature but do not have to be. Cycling is typically done outdoors on trails, streets, or gravel paths, but some use an indoor track. Not all cycling events are competitive, and many enjoy simply riding for distance as a form of cardio to keep in shape. Today, the Union Cycliste Internationale (UCI) governs the rules and regulations of cycling.

What are the most popular cycling sports in the world?

The most popular cycling sport today is the yearly competition, the Tour de France. The race is held annually in July and contains over 20 stages that cover 2,235 miles. The race has both time trials in its stages and racing segments, and typically each team at the competition is made up of 9 riders. The winner of each day's race receives a yellow jersey called "Maillot Jaune." The Tour de France is highly competitive, as only four people have ever won the tour more than four times.

Which cycling sports are in the Olympics?

Cycling has been a part of the Olympics since 1896, which first included only two road cycling events: the individual road race and the team time trials. They also held four track cycling events, including team and individual pursuit races, a sprint, and a 1-km time trial. Today, the Olympics have expanded to include events such as mountain biking (1996), BMX racing (2008), and BMX freestyle (2020).

Cycling sports are not necessarily seasonal. While the competitive season typically takes place over the summer months and can start as early as January in some countries, many cyclists remain active in the sport year-round. In non-competitive terms, cycling can be done anywhere and anytime as long as you have yourself, a bike, and a road. Many gyms offer indoor stationary bikes, and some even have indoor tracks to bike on during the winter.