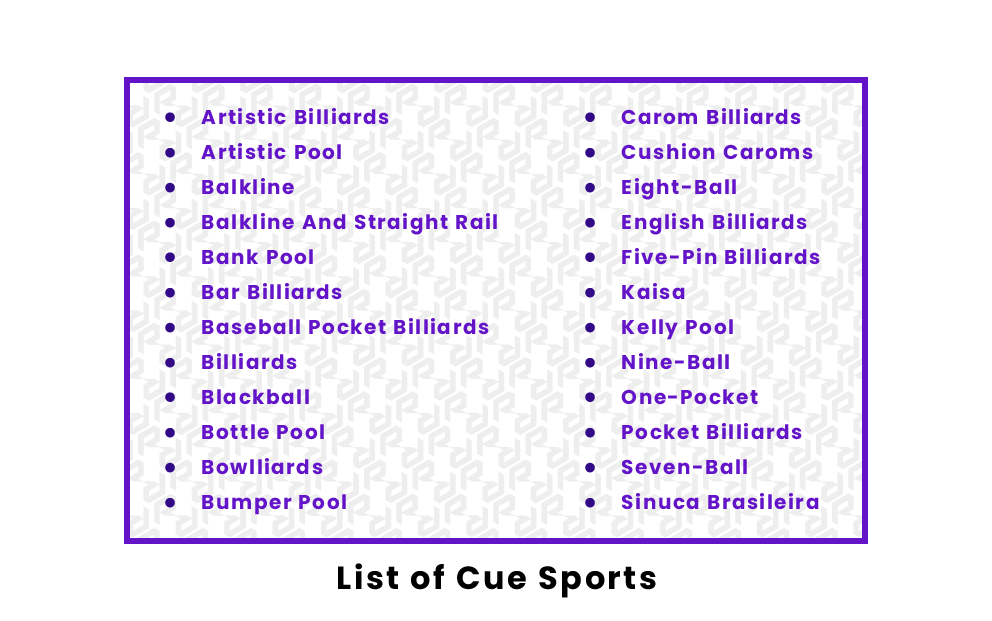 Cue sports have been around since the 15th century. The most popular cue sport is pool, which is also known as billiards. Billiards has been around since at least 1893. In most cue sports, the main equipment required for play is a cue (stick), balls, and a table. The tables may vary depending on the game. For instance, bumper pool is played on an octagon table rather than the typical rectangle table that billiards is played on. In any given cue sport, the objective is usually to pocket ‘your’ balls before your opponent does. One of the most popular competitions in cue sports is the Euro Tour, where nine-ball billiards is played. Most cue sports are played one versus one, but some versions can have two people per team. One of the most popular variations to the well-known game of billiards is snooker, which is played on a larger table (6 feet by 12 feet) with smaller balls and smaller pockets.

What are cue sports?

Cue sports are a variety of games played with a stick, known as a cue, and balls. The objective of all cue sports is to knock your balls into the pockets of a table with your cue. The tables in each different cue sport are covered in cloth, so the balls roll smoothly on the tables. There are many different games in the world of cue sports that are played on different tables and with different rules. Billiards is often used as a blanket term for many different variations of cue sports.

What are the most popular cue sports?

The most popular and well-known cue sport is called billiards. In casual settings, it is often referred to as pool. Billiards is played with a cue, 15 billiard balls, and one white ball that players hit into the other balls with their cue. There are other variations of billiards that are very popular as well, and they are played on the same table. Seven ball pool and eight ball pool have slightly different rules, but keep a very similar objective of getting your balls in the pockets before your opponent does.

A cue is a stick that billiards players use to hit their balls on the cloth-covered table. It is usually used to hit a cue ball, typically the white ball in billiards, into other billiards balls on the table, depending on the type of cue sport you are playing. Most cue sticks, which are simply called cues, are about 1.5 meters long and weigh about 20 ounces. They are made of wood and are also known as billiard sticks. Some billiard sticks are shorter than 1.5 meters, depending on what cue sport you are playing. For example, bumper pool cues are only about one meter long.

How many players do you need for cue sports?