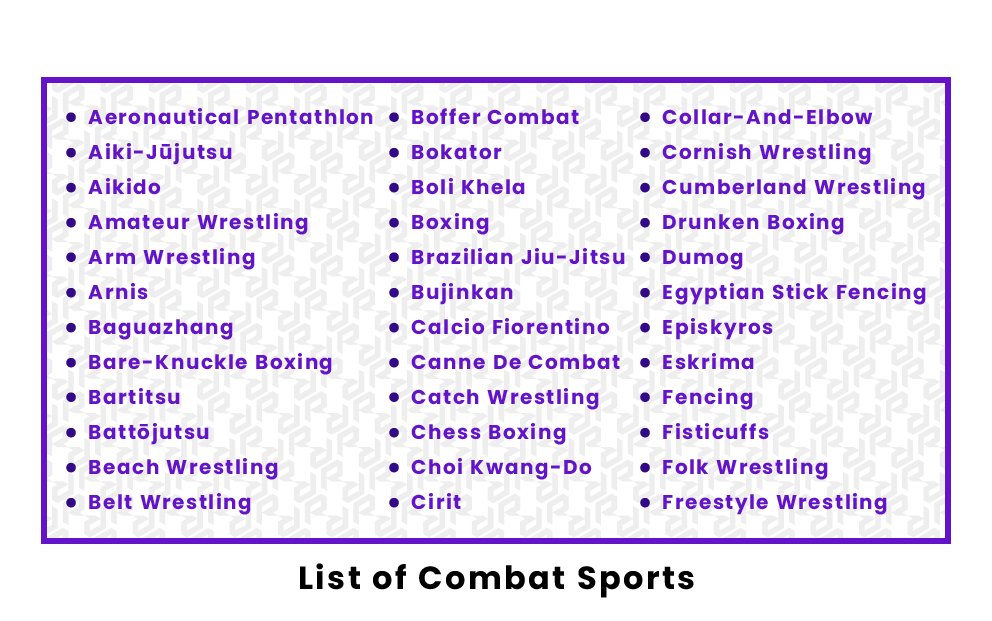 Combat sports are sporting events that involve fighting or some form of physical combat, either hand-to-hand or with weaponry. Combat sports may be the oldest sports in human history, as they originate directly from the art of warfare and fighting. As a result of this, there are many combat sports that are unique to various cultures from across the world. Every type of combat sport is different, with its own rules, techniques, and equipment.

In general, the objective of most combat sports is to defeat your opponent by injury or submission. Usually, most combat sports involve two combatants, and victory is generally declared when one of the combatants is too hurt to continue, submits to their opponent, or receives a certain number of hits that are counted against them. However, some involve more than two contestants. Combat sports have a long professional history, including at the Olympic Games, where they were some of the earliest sports practiced, along with foot races.

What are combat sports?

Combat sports are competitions that involve physical fighting, either with the body or with weapons. Combat sports have a long history, beginning with the practice of war. Most combat sports are cultural arts, such as various East Asian martial arts, including karate, kung fu, jiu-jitsu, and taekwondo. These sports all have unique techniques and forms that athletes practice in order to win fights. Some combat sports, such as fencing, also make use of weapons such as swords.

What are the most popular combat sports?

Some of the most popular combat sports are boxing, karate, and mixed martial arts (MMA). Boxing is a sport where fighters wearing gloves throw punches at each other in a boxing ring for a set period of time. Karate is a Japanese martial art that utilizes various strikes with both hands and feet to defeat an opponent. Mixed martial arts (MMA) takes place in a ring but allows for various strikes with the hands and feet, as well as takedowns and other forms of hybrid combat.

Which combat sports are the best for self-defense?

Some of the best combat sports for self-defense include Brazilian jiu-jitsu, Muay Thai, and krav maga. Brazilian jiu-jitsu, unlike many other popular combat sports, teaches techniques that can help a fighter who has been thrown to the ground. Muay Thai, from Thailand, uses shins, knees, elbows, and fists as striking weapons, and requires a hardened body. Krav maga, developed by the Israeli military, is influenced by various martial arts and prioritizes quick and brutal counter-attacks to ensure the neutralization of a threat.

What combat sports are in the Olympics?

There are six types of combat sports in the modern Olympic Games: boxing, fencing, judo, karate, taekwondo, and wrestling. Wrestling is the oldest Olympic combat sport, introduced to the Ancient Greek Olympics in 708 BCE, followed twenty years later by boxing. Various other combat sports, including savate (a French form of Kickboxing) and karate (a Japanese Martial Art), were included in some modern Olympics but were later removed. Taekwondo is the most recently added Olympic Combat Sport, first appearing at the 2000 Sydney Games.