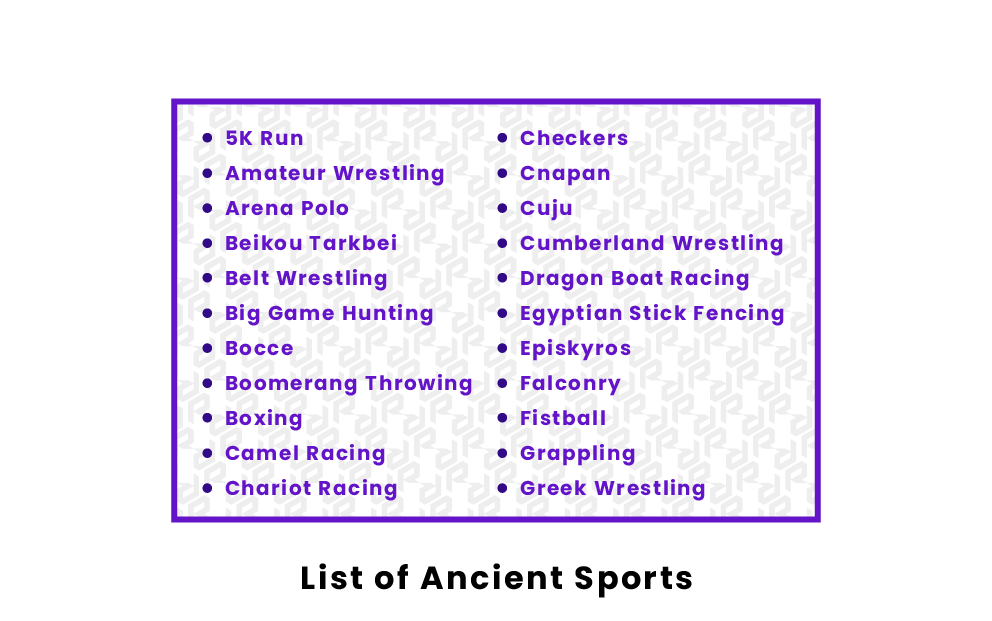 Ancient sports encompass a number of different categories, including both leisure games and athletic feats, but many are still very familiar to us today. Some of the classic games played in the modern world, such as checkers or bocce, are actually thousands of years old, and physical feats such as wrestling and racing long distances are some of the oldest competitions in human history. However, certain ancient sports are more obscure, and some have fallen out of practice, existing only as historical examples of sports that human beings used to play.

What are ancient sports?

Ancient sports are sports that were played in the ancient world, in societies such as Ancient Egypt, Greece, and Rome. Many of the sports played in the modern era, such as checkers, bocce, boxing, horseshoes, kung fu, swimming, tug-of-war, and wrestling, all come from ancient sports played by human beings who lived many centuries ago. These sports were often physical activities related to labor or military combat, but many were also leisurely games played for fun.

What are the most popular ancient sports today?

Some of the most popular ancient sports that have survived until today are bocce, boxing, checkers, and wrestling. Bocce is a form of lawn bowls, a game played by multiple people where players attempt to throw balls as close as possible to a small target ball. Bocce is the Italian variant of the sport, but the game itself dates back to 5000 B.C.E., in Ancient Egypt. Boxing and wrestling were popular sports across the ancient world that were originally developed as military training exercises and are still two of the most popular combat sports today. Finally, checkers, also known as draughts, have existed for thousands of years, dating back to 3000 B.C.E.

What ancient sports are currently in the modern Olympics?

What are the most dangerous ancient sports?

Some of the most dangerous ancient sports include pankration, episkyros, and the Mesoamerican ballgame. Pankration, an Ancient Greek sport, was a form of anything-goes fighting similar to MMA, but involved bringing the opponent as close to death as possible without killing them. Episkyros was another brutal Greek sport, a form of soccer, from which athletes would often emerge with broken bones. Finally, the Mesoamerican ballgame, later called ulama, was an Ancient Mayan sport in which players would bounce balls made from human skulls off of their hips, trying to get them through a mounted hoop. At the end of the game, the losers would often be ritually sacrificed. In the modern era, this game is less brutal but still dangerous due to its heavy ball and lack of padding.