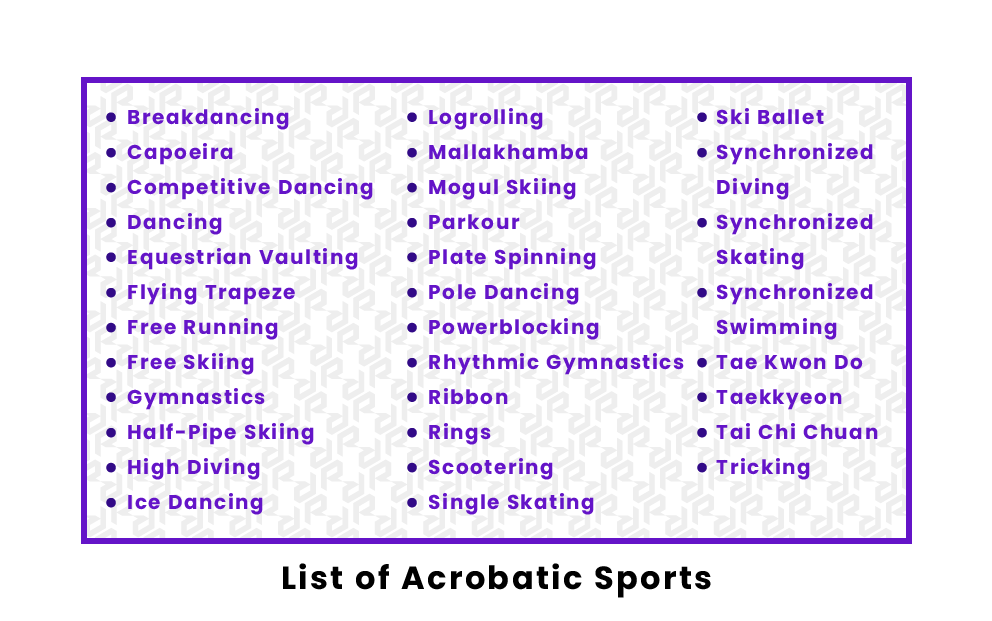 Acrobatic sports refers to a large number of events that all hold the common theme of focusing on acrobatic skills, such as balance and exceptional body control. The study and practice of acrobatics originated in Ancient Greece but became the sport we recognize today during the Soviet Union in the 1930s and later the US in the 1970s.

Most acrobatic sports use similar scoring systems broken down into categories, with each category decided by one judge. While different acrobatic sports may use other criteria, the two categories that gymnasts are scored on are difficulty and execution. Judges rate the gymnasts' trick or skill based on these criteria, and each technique holds different point values for scoring. Today the face of Team USA's gymnastics program is Simone Biles, the first person ever successfully to land a "Yurchenko Double Pike" in competition. Biles, who is only 24, is already considered one of the greatest of all time in her respective events.

What are acrobatic sports?

Acrobatic sports are a blend of athleticism and grace that focus on an athlete's ability to contort and control their body both in the air and on the ground. The sport, while challenging, has different levels of difficulties for everyone and is growing in popularity. The 1st national governing body for acrobatics, the United States Sports Acrobatics Federation (USSAF), was created in 1975 and eventually became known as the United States Sports Acrobatics (USSA) by the 1990s. USSA eventually merged with USA Gymnastics (USAG) in 2002, which has been the governing body ever since.

Acrobatic sports can be either individual or team sports, depending on the specific competition and format. For example, Olympic gymnastics has individual events in which participants are scored solely on their performance and a team event that scores each team member’s performance, with the final team score being the cumulative points for all gymnasts on each team's. This system gives acrobatic sports the unique quirk of being both an individual and team sport. Certain events such as the synchronized-trampoline and women's pairs allow multiple gymnasts from the same team to perform a routine on the floor simultaneously.

What is the highest level of competition for acrobatic sports?

​​The highest level of competition for acrobatic sports varies depending on each discipline. For many, that highest threshold is the Olympics, which contains numerous different acrobatic sporting events over both the Summer and Winter Olympics such as rhythmic gymnastics, freestyle skiing, half-pipe skiing, and even trampoline. Recently, the Olympic committee has also decided to add breakdancing, or breaking, to the 2024 Paris Summer Olympics, highlighting acrobatic sports' growth worldwide.

What are the most popular acrobatic sports?

Today the most popular acrobatic sport is artistic gymnastics. Ever since debuting in the 1896 Olympics, this style of Gymnastics has paved the way for the sport. This discipline covers over ten events in the Olympics, four women's events; vault, uneven bars, beam, and floor, and six men's events; floor, pommel horse, rings, vault, parallel bars, and horizontal bar.