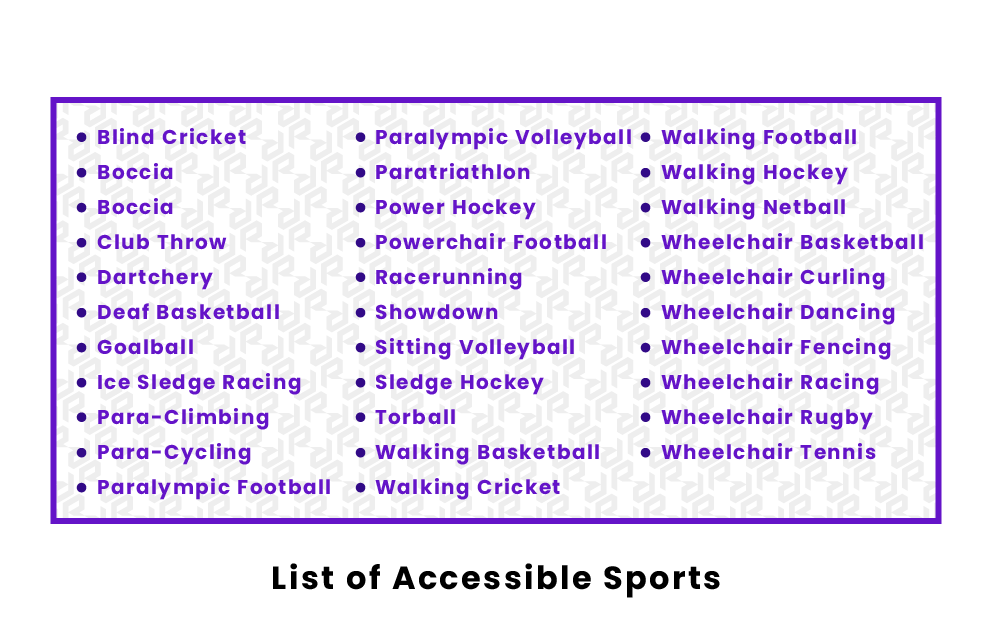 Team spirit, competitiveness, and dedication are all aspects that make sports beautiful. Thanks to accessible sports, everyone can make lifetime memories by playing their favorite sport regardless of their ability level or age.

In the late 1940s, an English neurosurgeon named Ludwig Guttman created the first competition for physically impaired athletes. From his vision of giving injured soldiers a way to compete in multiple sports, the 1960 Olympic program started to include a Paralympic section of the games. Now, the Paralympics allow athletes from all over the world to defeat the odds and earn Olympic glory in front of millions of fans.

Accessible sports also include disciplines meant for the elderly. Age is, indeed, in no way a reason to give up the adrenaline of playing sports, and it is never too late to keep in shape. Sports like walking football or even wheelchair basketball allow older athletes to never stop exercising.

What are accessible sports?

Accessible sports are a discipline of sporting activities that can be played by athletes with a disability. Most of these sports, such as wheelchair cricket or powerchair football, are inspired by able-bodied disciplines. There are also some extremely popular activities such as boccia, dartchery, and club throw that were created specifically for athletes with a physical or intellectual disability. Another category of accessible sports is walking disciplines, which reduce running and physical effort to allow older participants to keep playing.

Which accessible sports are in the Paralympics?

Among the most popular disciplines, there are accessible sports such as boccia, paratriathlon, and wheelchair fencing. Other accessible sports such as wheelchair tennis, paralympic volleyball, and wheelchair basketball are also included in the Paralympic Programme. In over sixty years of activity, the International Paralympic Committee has strived to give Paralympic athletes the same opportunity to compete at the highest possible level. The Paralympics, which are held in the same place as the Olympics and last for almost a month, now include a total of 28 separate sports.

What accessible sports are best for older people?

Walking disciplines of popular sports are the best accessible sports for older people. Accessible sports are not limited to athletes with a disability but also extend to older people. These sports turn extremely popular disciplines such as football, netball, basketball, or even hockey into activities that require less conditioning and physicality so they can be played by people who are over eighty years old. Although running is replaced with walking, this does not mean that the intensity and competitiveness are lost.

What are the most popular accessible sports?

The Paralympic Games have contributed tremendously to the rapidly increasing popularity of accessible sports. An example of this is wheelchair rugby, which was introduced in the Paralympics in 1996, twenty years before rugby became part of the Olympics. This sport has gained great popularity thanks to its physicality. Other popular accessible sports are wheelchair basketball, sitting volleyball, hand cycling, sled hockey, and wheelchair tennis. Accessible sports such as goalball and torball, which allow visually impaired athletes to participate in sports similar to handball, have also grown tremendously in recent years.