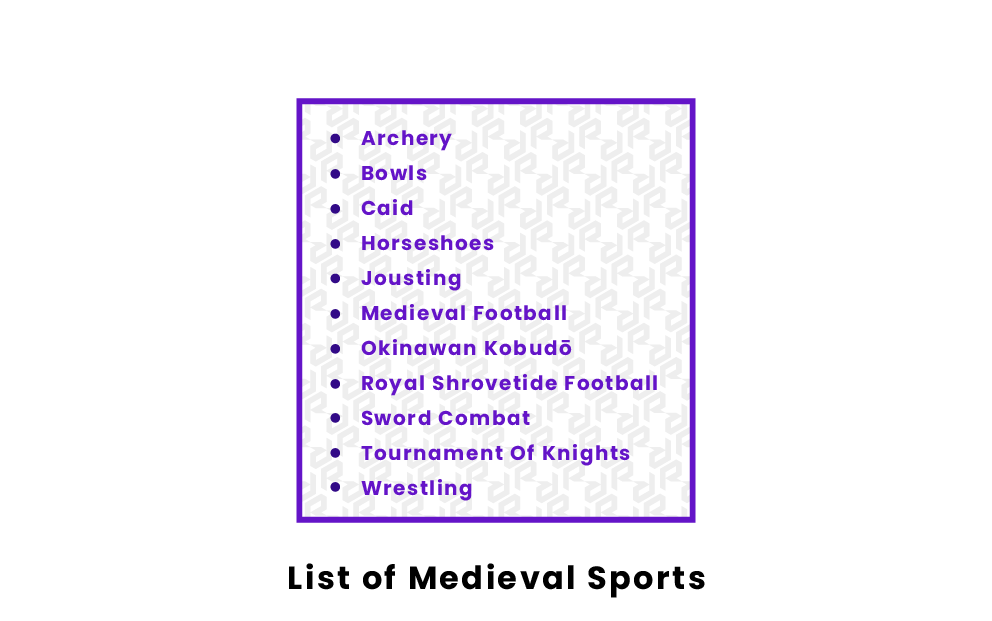 During the middle ages, people would engage in a variety of sports that have become world-renowned over the course of time. There are a variety of medieval sports available to athletes to play from the amateur level to the professional level. Medieval sports were created to bring an element of excitement during a time in history that was heavily focused on religion and combat. As combat and war were major components during that time, the sporting events created were held with an emphasis on increasing the participants’ physical abilities. As medieval sporting events gained popularity, they became adopted during festivals for spectator entertainment as well as opportunities for training nobles and knights. Early medieval games had vague rules which would lead to many deadly outcomes. The games were both physically demanding and also placed little importance on participants’ safety.

What are medieval sports?

Medieval sports are outdoor sporting events that were created during the middle ages. Some events have gained notoriety and have remained relevant in today’s society, while others are now only a part of history. Although society has continued to push onward, there are locations around the world that hold medieval-themed events and allow for medieval sporting competitions to take place. Today, people participate in medieval sporting events for entertainment and novelty, but these events were held primarily for training soldiers and increasing their physical fitness during the middle ages.

What are the most popular medieval sports today?

Jousting and archery are considered to be some of the more popular medieval sporting events. Jousting is an event where two players carrying long, pointed poles charge at one another while riding a horse’s back. The objective is to strike your opponent off of their horse, and the first one to do so is declared the winner. Archery is an event played with a bow and arrow. The objective of this game is to score the highest amount of points by shooting at a target.

What were the most dangerous medieval sports?

Of the medieval sports, jousting was one of the more dangerous events played. Jousting was a game played by participants on horseback that were covered in heavy armor from head to toe, and they were equipped with long wooden beams known as “lances” and shields to defend themselves. With the objective of this event being to unseat your opponent from their horse, the players who participated in these matches would leave bruised, skewered, or even decapitated.

What medieval sports are in the Olympics?

The Olympic Games have been around for centuries and have been used as a way to unite the world for competitive and healthy sporting events where athletes represent their native countries. Many sporting events have come and gone during that time, while some events have evolved into sports played today. In today’s Olympics, you can find athletes who participate in events that were once prominent in the medieval era. Archery is the most prominent of these events, as the age-old method of combat and hunting has transformed into a competitive activity on the world of sport’s biggest stage.