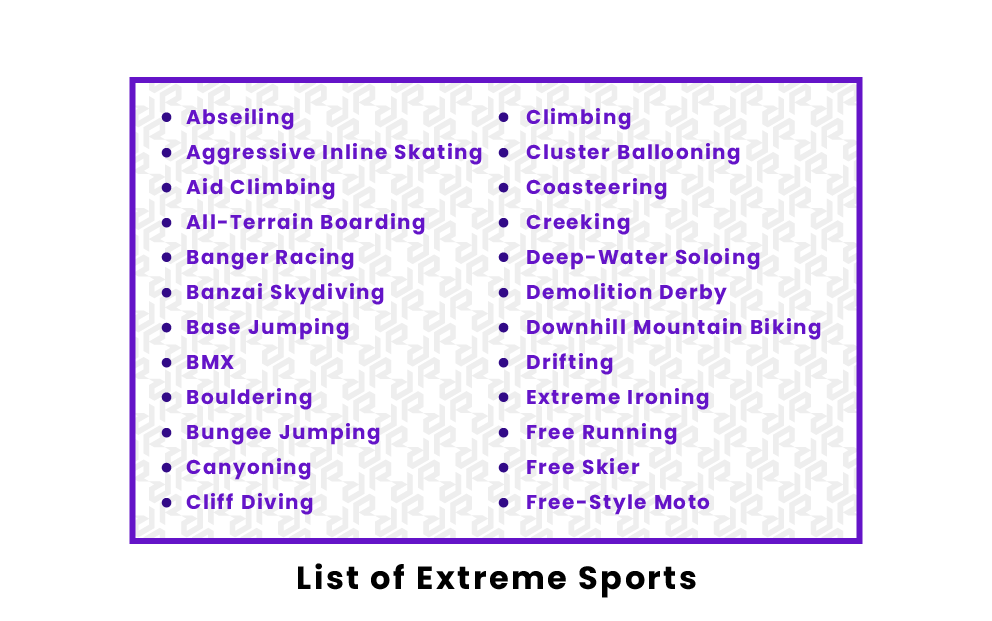 There are a variety of extreme sports available to athletes all over the world. Extreme sports are generally those that involve a high degree of intensity and risk. These sports induce high levels of adrenaline in participating athletes due to the thrill involved with each. While not as common as sports such as basketball and baseball, extreme sports are quickly growing in popularity. Some of the most popular extreme sports include downhill mountain biking, skydiving, bungee jumping, and ice climbing.

Extreme sports are a unique and relatively new form of sporting activity that have continued to grow from the desire for excitement and entertainment. The idea of taking risks in order to chase thrill and raise adrenaline has been around for a long time, but doing so in the form of organized sports didn’t fully develop until the late 1900’s. Due to the increased safety of everyday life and technological advancements, individuals began looking for new ways to experience risk. In the 1970’s, activities such as mountain climbing, bungee jumping, and skateboarding started to gain popularity as a result.

One of the first major steps in popularizing extreme sports was the creation of the Dangerous Sports Club at Oxford University. Their public recognition began to grow when they became the first group to attempt modern bungee jumping from bridges. Their stunts quickly gained popularity, garnering attention from T.V. shows and newspapers in the 1980’s. They completed jumps from notable landmarks like the Golden Gate Bridge. Their activities grew to include hangliding, base jumping, and microlight flying, which helped to facilitate the development of even more extreme sports. Extreme sports only continued to grow in popularity when competitions such as the X Games increased their national audience significantly in 1995. This resulted in new types of extreme sports like surfing, snowboarding, skating, and BMX beginning to develop as modifications of existing extreme sports.

Extreme sports provide unique experiences and intense thrills, but this doesn’t come without the risk of serious injury. Extreme sports often have very strict rules surrounding how exactly to go about participating, as well as who should and should not participate. These rules should be followed at all times. On a general basis, many of these sports require basic protective gear like helmets, gloves, or in the case of climbing sports, some sort of ropes to ensure a misstep doesn’t turn into a potentially fatal mistake. Extreme sports are a great way for adrenaline junkies to satisfy their cravings, but this desire to live life adventurously shouldn’t overshadow the importance of being smart and safe at all times.

What are extreme sports?

Extreme sports are those that are fast paced and involve a high level of risk and excitement. Although they can be dangerous, athletes tend to compete in extreme sports due to their thrilling and adrenaline-inducing nature. Some common extreme sports include snowboarding, skateboarding, BMX (bicycle motocross), mountain biking, and freestyle skiing. One of the largest extreme sports competitions is the X Games, which was started by ESPN in 1995 and has greatly increased the awareness and popularity of extreme sports.

What is the most popular extreme sport?

BMX racing is often considered the most popular extreme sport. The sport was created in the 1970s and first appeared as an Olympic sport in the 2008 summer games in Beijing. In BMX racing, bikers compete against one another on tracks composed of various terrains, jumps, and turns with the objective to be the first one to cross the finish line. The sport is popular in many countries worldwide, including the United States, Australia, Canada, France, Italy, and the Netherlands.

What is the most dangerous extreme sport?

Base jumping is considered to be the most dangerous extreme sport. In base jumping, participants leap off various surfaces and structures. In fact, BASE is an acronym for jumping surfaces including bridges, antennas, bridges (spans), and the Earth as a whole. When performing a jump, a slight mistake or miscalculation can easily result in death. On average, one in every sixty base jumpers dies. Therefore, base jumping is highly risky and is the most dangerous extreme sport.

What should you do before trying an extreme sport?

Before trying an extreme sport, it is important to be active and get into good physical shape. This can include exercising daily, eating healthy foods, and getting plenty of rest to ensure that your body is properly prepared to endure the extreme physical demands of the sport. Another important step to prepare for extreme sports is to obtain the necessary equipment. Many extreme sports require specific equipment to participate and furthermore, having high quality equipment can greatly benefit athletes.