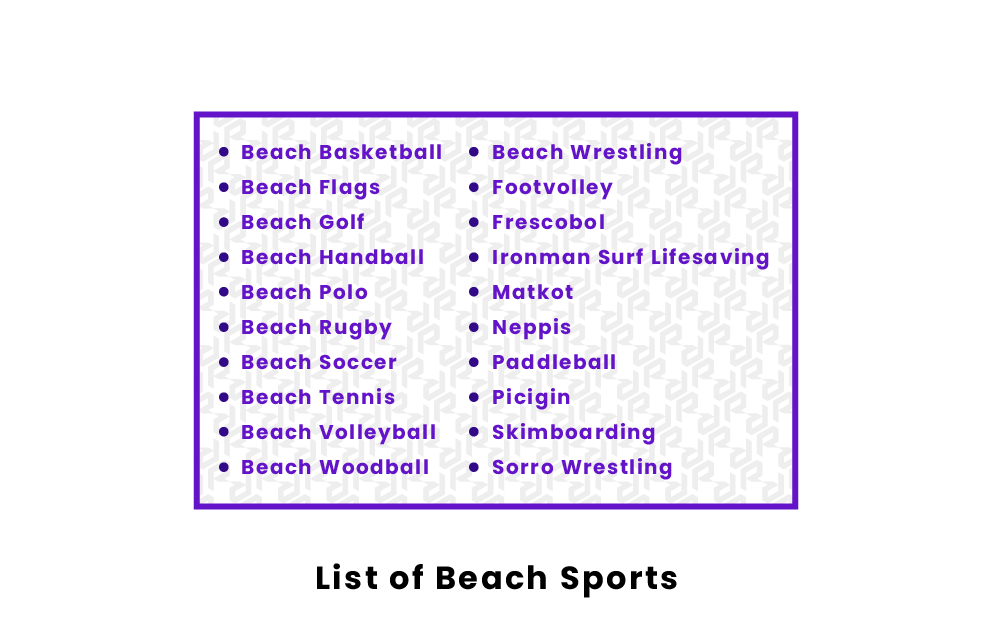 Beach sports incorporate all of the fun and adventurous sports that people can play while on or near a beach. Beach sports are played in hot and dry environments, which requires a lot of stamina. Sandy surfaces make it even more difficult. They are likely played during the summer months. The piece will cover information about the amount and kinds of beach sports, equipment needed, and differences between beach sports and normal sports.

What are beach sports?

A beach sport is any kind of sport that is played on a sand surface, often near a large body of water. They are often a variant of a traditional sport played on a harder surface such as grass. Beach sports can have more difficult playing conditions due to the terrain and weather elements.

What sports are most frequently played on a beach?

Beach volleyball is considered one of the most popular and frequently played sports on a beach due to its international recognition on the competitive level. In fact, this sport was first played in 1915 in Hawaii. In addition, this particular sport has been popularized by college athletes who play it. Beach soccer is frequently played as well because of soccer’s familiarity throughout the world. Surfing is considered a very popular beach sport as well because of the many areas throughout the world where people can partake in it.

What equipment do you need for beach sports?

There are a wide variety of pieces of equipment that are needed for beach sports. Normal sports that are played on the beach will use the same equipment for competition. However, there is often no need for shoes in order to play beach sports. Ropes or long strips of plastic are used to help create boundary lines in the sand. In addition, it is suggested to wear sunglasses for various beach sports in order to have protection against the sun.

What are the differences between beach sports and other sports?

The main difference between beach sports and other sports is the playing surface. Beach sports are strictly played on a sand surface, often in outdoor areas. Certain other sports will also have a variation played on the beach. The beach-version of a sport will often have slight differences in playing boundaries and rules. These slight changes accomodate for the difficulty that is involved with beach sports. In addition, beach sports can be more or less casual compared to other sports. This completely depends on if participants are playing in an actual competition or not. In beach volleyball, players can jump around 300 times during a match, which makes the competition very intense. Beach sports also require less equipment in general.