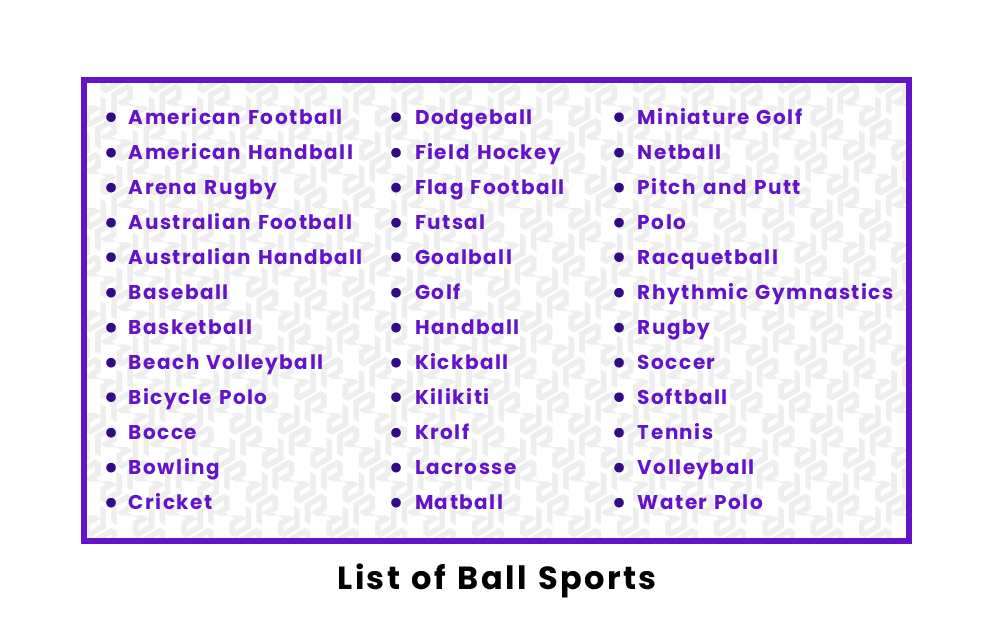 Ball sports are defined as any activity that uses a cylindrical or oval-shaped object in a manner of throwing, kicking, or hitting. Many of these sports can be played either individually or as a team, depending on which sport you are playing. Ball sports are arguably the most popular form of sport in the world, with most mainstream sports and many niche sports falling under the umbrella of ball sports. Millions worldwide engage in ball sports at some level on a daily basis, and many of these sports are even an integral part of the Olympic Games. This list includes some of the most popular sports in the world, such as football, baseball, soccer, cricket, basketball, and tennis.

Ball sports have been played for centuries, including within some of the earliest human civilizations. Evidence of ball games can be found on ancient Egyptian monuments, and Native Americans played a version of lacrosse dating back to pre-Columbian times. To this day, ball sports remain one of the most popular versions of sport and can be enjoyed by people of all ages competitively or recreationally.

What are ball sports?

Ball sports are a form of sporting activity that uses a ball or similarly-shaped spherical object as a main function of gameplay. Ball sports encompass an umbrella of many popular sports like football, soccer, and baseball, as well as smaller-scale sports that may not have as much media attention, like floorball and patball. Nonetheless, ball sports are enjoyed by millions on a daily basis, both competitively or simply just for fun.

What are the most popular ball sports?

What are the best ball sports for kids?

Arguably the best ball sport for kids is baseball due to its low injury risk and ability to get started at a young age. Baseball is played by 4 million kids aged 5-18 in the United States alone as a part of an easy-to-join Little League or Pony League program. Soccer rivals baseball as the best ball sport for kids as it can be started at a young age and requires little equipment, making it a good choice for many kids worldwide who don’t want to commit to more expensive equipment costs.

What ball sports are played in the Olympics?