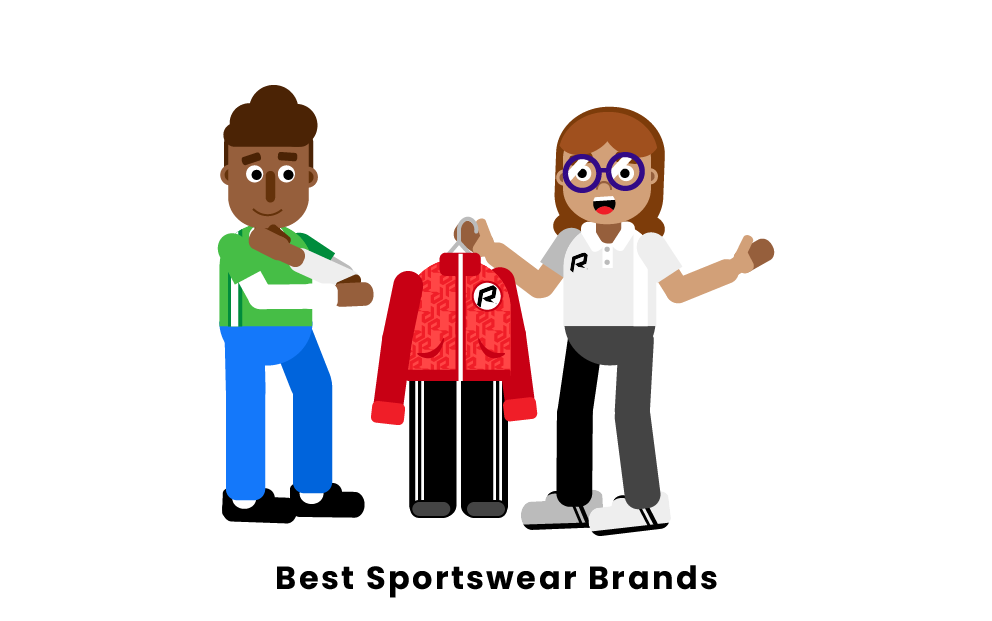 The creation of the first sportswear items dates back to the first modern Olympics in 1896, which represents the start of official sports competitions. Up until then, most people would wear street clothes when practicing sports. The low level of competitiveness before the modern Olympics did not lead athletes to seek more aerodynamic clothes. However, with the evolution of sports, sportswear has now reached a point where it represents a potential difference-maker in competitions.

What are the most popular sportswear brands?

Widely considered the world’s leading sportswear brand, Nike has become the top choice of millions of athletes in less than sixty years of business. Nike was founded in 1964 by former track runner Phil Knight and his coach Bill Bowerman in Oregon and quickly expanded its reach globally. Nike is currently the largest sneaker supplier in the world and has also developed many different athletic wear products such as shirts, shorts, sweatpants, and other accessories.

In recent years, Nike has secured partnerships with the NBA and the MLB, exponentially increasing their brand’s visibility worldwide. The Oregon-based brand is also the official supplier of the NFL and can count on sponsorship deals with top soccer clubs such as Chelsea FC, Tottenham Hotspur FC, and FC Barcelona. Nike is also the official supplier for all United States Olympic teams, as the brand offers high-quality products across all sports categories. Superstars like Cristiano Ronaldo, Lebron James, and Serena Williams all represent the face of the brand, leading millions of fans to be loyal to Nike.

Adidas is among the oldest sportswear brands, founded in 1924 by Adolf Dassler, a 23-year-old from Germany. For decades, Adidas represented the world leader in sportswear thanks to its success in the European soccer world. The kits manufactured for national teams such as Germany, Netherlands, Argentina, and Mexico immediately became an instant classic, bringing Adidas products to every part of the world. Adidas produces a plethora of sports-related products, from sport-specific equipment for soccer, basketball, and baseball, to general activewear and running shoes.

In recent years, Adidas has invested great attention to its advertisement campaigns, creating its slogan “Impossible is nothing.” Aimed at reaching every single sport, this campaign has involved both former legends and current players. Athletes like Paul Pogba, Deandre Hopkins, Lionel Messi, and David Beckham all took part in this campaign. Adidas has also gained great popularity through its lifestyle collections that have involved artists such as Kanye West and Pharrell Williams. The brand is the official uniform supplier of the NHL and soccer clubs, including Real Madrid, Manchester United, and Bayern Munich.

Despite its short history, Under Armour has quickly risen to the top of the sportswear brand rankings. Founded by Kevin Plank, a former special teams captain at the University of Maryland in 1996, Under Armour has obtained great success thanks to its synthetic fabric items. Thanks to the technology created by Plank, Under Armour products are able to keep athletes dry and effectively wick sweat. Under Armour offers a wide range of sports apparel and equipment for sports, including baseball, basketball, football, and much more.

In only twenty-six years of activity, Under Armour has secured deals with some of the biggest US colleges. These include Notre Dame, Maryland, Cincinnati, and Auburn. Under Armour has also signed deals with some of the world’s top athletes, including Tom Brady, Steph Curry, and Jordan Spieth. Their technology has created resistant and affordable gear that has become the first choice of many worldwide, especially in sports like golf and running, where the comfort of Under Armour products can play a difference in competitions.

Reebok is one of the few sportswear brands that was created in the nineteenth century and is still active today. The brand was created in Bolton, England, as the sportswear section of J.W. Foster and Sons in 1895. Due to its English roots, the company’s logo featured the Union Jack flag, creating an iconic look that became popular all over the world. Reebok primarily specializes in athletic footwear but has also produced shirts, shorts, jerseys, and other athletic wear.

In 2005, the company was acquired by the Adidas Group, which revived Reebok through deals with athletes such as Shaquille O’Neal and Allen Iverson. Aside from their basketball products, Reebok has been active in creating lifestyle collections partnering with famous artists in the United States. Throughout the years, 50 Cent, Rick Ross, Alicia Keys, and Jay-Z have all had deals with Reebok, making their sneakers a must-have for many fans around the world. Reebok now also has a deal with NFL star JJ Watt which has made their running shoes extremely popular in the United States.

Puma was created in Germany shortly after World War II. This brand was founded by Rudolf Dassler, the brother of Adidas’ founder Adolf Dassler. After a feud, the two brothers decided to split up, creating each their own brands. Almost eighty years after their split, Adidas and Puma are now two of the biggest sportswear brands in the world.

Puma owes a great amount of its popularity to its soccer products, especially gear such as cleats, jerseys, and tracksuits. The German brand can count on deals with many national teams including Italy, Austria, Ghana, Czech Republic, and Cameroon. Puma soccer cleats are also extremely popular thanks to brand ambassadors such as Sergio Aguero, Antoine Griezmann, and Neymar Jr. Recently, after adding rapper and entrepreneur Jay-Z to their creators board, Puma has been active in producing basketball gear. Deals with young NBA stars such as Kyle Kuzma, Michael Porter Jr, and Lamelo Ball have made Puma basketball shoes a popular choice among amateurs.

Lululemon is a relatively young brand as it was founded in 1998. Unlike every other brand listed in these rankings, Lululemon has not made deals with teams and professional athletes their priority. Rather than creating team sportswear, Lululemon has been committed to creating products for individual athletes that can be comfortable and aerodynamic, while also looking more elegant than the average sports gear. For this reason, the logo is meant to be hardly noticeable on every product of their collections.

This brand started out in Vancouver, Canada, and has become the leader in producing seamless yoga pants. They have found great success in running and golf collections for both men and women as well. Lululemon is now targeting an expansion into watersports, thanks to their deals with surfers Mihimana Braye and Malia Manuel, and winter sports, where they are partnering with snowboarder Craig McMorris.