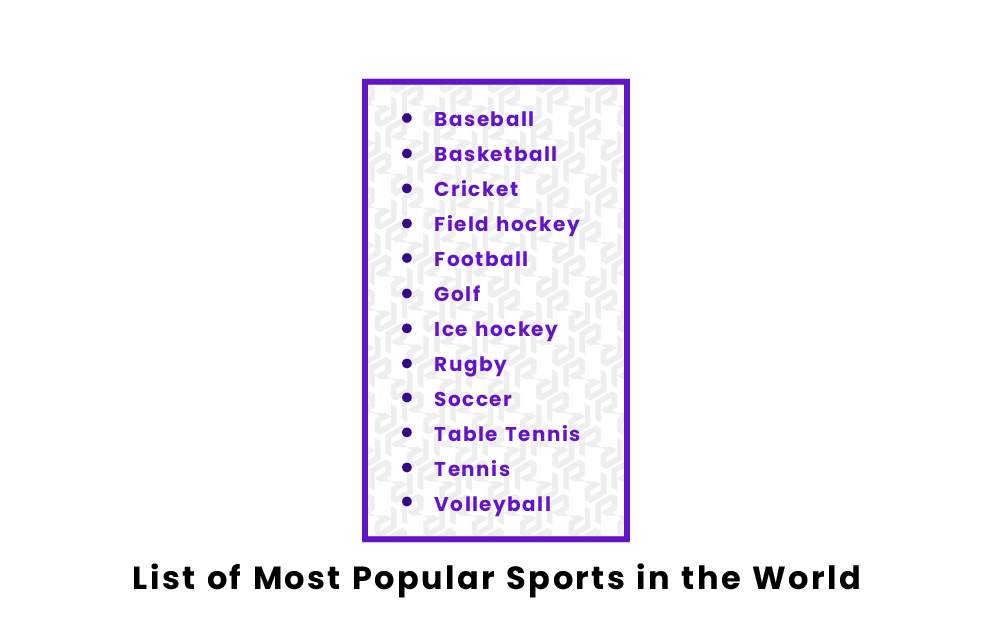 Sports have been around for thousands of years and have evolved tremendously over time. From the first Olympic Games in 776 B.C., in which the Greeks introduced formal sports to the world, to now, in which there are over 150 professional sports leagues in North America alone, organized sports have expanded tremendously. The most popular sports in that first Olympics were chariot racing and javelin throwing. Now, soccer and cricket are the most popular sports, in terms of viewership, across the globe. There are also an estimated 8,000 sports in the world, and with so many options available, almost anyone can play at least one. One of the most popular sporting events across the globe is the FIFA World Cup. Otherwise known as the “World Cup,” this event is a soccer tournament that features the 32 best national teams in the world and happens every four years. In 2018, the World Cup drew a total viewership of over three billion people.

Most Popular Sports in the World List A to Z

What is the most popular sport in the world?

The most popular sport in the world right now is soccer. An estimated 3.5 billion soccer fans and over 250 million people across over 200 different countries play the sport. There are currently 21 professional soccer leagues, with four of them in the world’s top-10 most profitable sports leagues. Some of the best soccer players in the world can make upwards of $60 million a year.

How many people in the world play sports?

It’s nearly impossible to figure out the exact number of people who play sports around the world. However, estimates show that in the United States, prior to the COVID-19 pandemic, over 70% of children ages 6-12 participated in sports at least once a year. In Europe, the EU reported in 2014 that over 40% of people 15 and older played a sport at least once a week. Overall, the trend with sports is people are more likely to play when they’re younger.

What is the most-watched sporting event in the world?

The most-watched sporting event in the world is the FIFA World Cup. The World Cup occurs once every four years and is a soccer tournament between the top-32 national teams in the world. Over 3 billion people tuned in to watch the 2018 World Cup, with over 1 billion people watching the final in which France beat Croatia 4-2 to capture its second-ever World Cup.

Who are the most famous athletes in the world?

The two most popular athletes in the world are Christiano Ronaldo and Lionel Messi, both of which are soccer players. Given that soccer is the most popular sport, it’s no surprise that two soccer players are the most celebrated athletes in the world currently. However, another famous athlete is professional basketball player LeBron James. Like Ronaldo and Messi, James has been considered one of the best at his sport for a very long time.

Pages Related to List of Most Popular Sports in the World