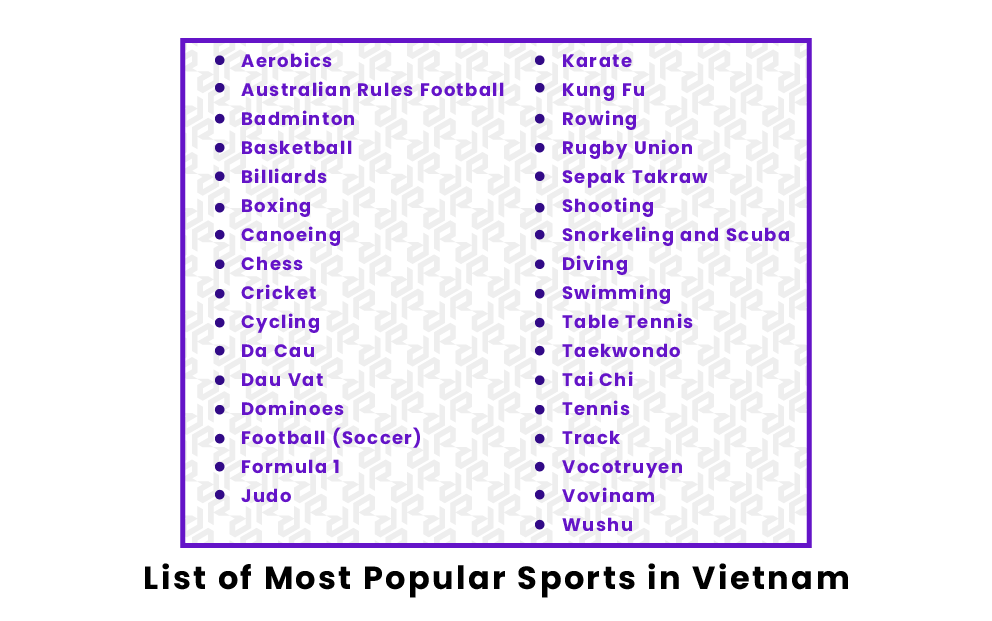 Vietnam has varied topography, including mountains and coastline, as well as a diverse population, which has been influenced by many cultures. As a result, a wide variety of sports, originating all around the globe, are popular in Vietnam.

Football, or soccer, is the most popular sport in Vietnam in terms of participation, but badminton comes in a close second. Volleyball and swimming are the other sports that Vietnamese people are most likely to participate in.

Many martial arts disciplines are widely practiced in Vietnam. Some of the most common are judo, karate, and kung fu; tai chi is especially popular with older people. The traditional martial arts of Vocotruyen and Vovinam–as well as the classic form of wrestling called Dau Vat–remain common throughout the country.

In addition to football, Vietnamese people love to watch sports from around the globe, including basketball, Australian rules football, rugby union, Formula 1, and tennis.

What is the most popular sport in Vietnam?

Football, or soccer, is the most popular sport in Vietnam. This is true in regard to the number of Vietnamese people who participate in the sport, as well as television viewership. More than half of all Vietnamese people play football; and the World Cup final is one of the most commonly streamed sporting events in the country.

The sport was first introduced to the Vietnamese by the French, in Cochinchina in 1896. Football has since spread throughout the country, with leagues and a national team being overseen by the Vietnam Football Federation.

What is the most watched sporting event in Vietnam?

The Southeast Asian Games, or SEA Games, is the most watched sporting event in Vietnam, with more than 700 million television viewers. Each competition draws as many as 20,000 live fans as well. The biennial games are held on odd-numbered years and feature teams from 11 Southeast Asian countries.

Over the course of two weeks, over 5,000 athletes compete in more than 500 different events, across 40 sporting disciplines, including athletics, aquatics, shooting, archery, basketball, cricket, football, and karate.

What is the national sport of Vietnam?

Da cau is the national sport of Vietnam. The game resembles badminton, except that players use their feet to strike the shuttlecock, instead of a racket. Da cau has been played throughout southeast Asia for centuries, becoming an integral part of Vietnamese culture.

Historically, Vietnamese emperors encouraged their soldiers to play da cau as a physical training exercise. Today, Vietnamese people play da cau every day on sidewalks, in parks, and at parties as part of their recreation and social life. There are even official da cau leagues and tournaments for the top players.

Pages Related to List of Most Popular Sports in Vietnam