List of Most Popular Sports in the United States 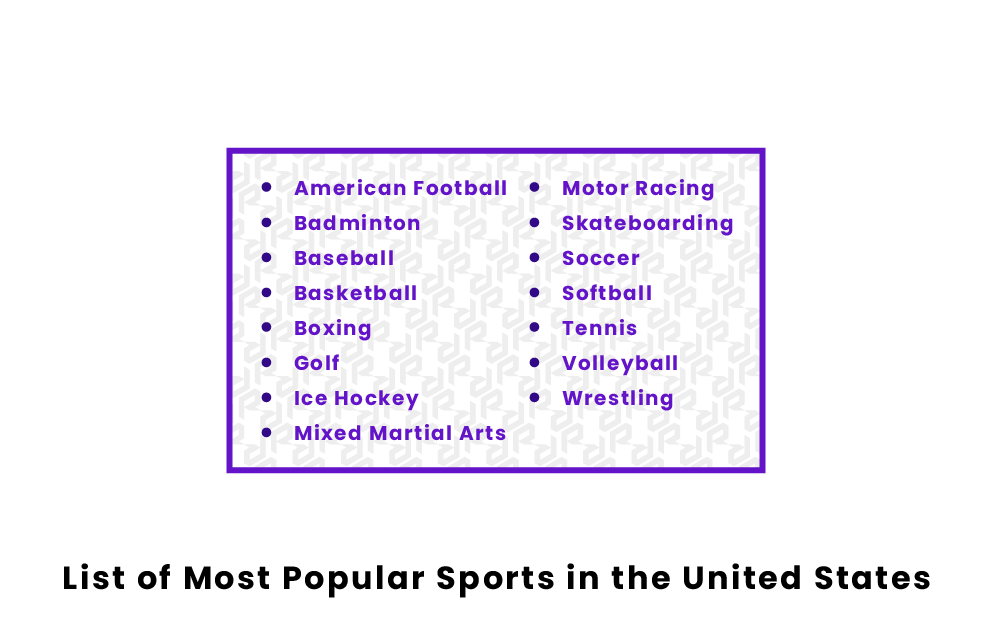 Sports have always been at the forefront of modern American culture. Millions watch sports almost every day, and numerous leagues hold significant popularity and are quite profitable. Aside from the professional level, millions of Americans partake in amateur or recreational sporting activities each year.

While the phrase "Baseball is America's National Pastime" was made famous by New York Yankee MLB legend Lou Gehrig back in 1939, it may not be as accurate today as it was then. The four major sports that get the most national coverage and participation today are basketball, American football, baseball, and ice hockey. This is in large part due to the popularity of professional sports leagues like the National Basketball Association (NBA), National Football League (NFL), Major League Baseball (MLB), and the National Hockey League (NHL).

Each of these leagues varies in degrees of popularity. Still, currently, the fan and viewership trends have favored the NFL, with 37% of the population claiming football is their favorite sport. The NBA trails in second by a fair margin but still gets about 105 million views per game. Some common household names in the NFL and NBA are Tom Brady, Deion Sanders, Kobe Bryant, and Michael Jordan.

Most Popular Sports in the United States List A to Z

What is the most popular sport in the United States?

American football is currently the most popular sport in the United States; in 2020 alone, the NFL generated 12.2 billion dollars in total revenue. The average franchise was most recently valued at 3.04 billion dollars. The championship game for the NFL, the Super Bowl, is one of the most viewed sporting events in the entirety of the US. Last year the Super Bowl generated 91.63 million viewers alone, and the record for most-watched Super Bowl goes to Super Bowl XLIX in 2015, which had 114.44 million viewers. Along with the sport’s popularity at a professional level, American football has a huge presence in youth, high school, and college leagues across the country.

How many people play sports in the United States?

Despite the immense popularity, the number of people who play professional sports is relatively small. Current data shows that only 1,784 players are drafted across the five major sports leagues in the United States (NBA, WNBA, MLB, NHL, and NFL), a stark contrast from the 149,371 D-1 NCAA athletes. This data gives a slim 1.19% chance for college athletes to continue playing their respective sports professionally. On just a college-level across all NCAA divisions, there are 480,000 athletes and 16,000 on a professional level. In regards to youth sports, the data from Project Play’s 2019 survey on youth sports participation shows 56.1% of kids ages 6-17 have had some kind of involvement in organized sports.

What is the most-watched sporting event in the United States?

What is the fastest growing sport in the United States?

Surprisingly, the fastest-growing sport in the US is pickleball; while new in terms of notoriety, it was invented in 1965. The sport is accessible to many, combining elements from badminton, tennis, and table tennis and only needing a few pieces of equipment such as paddles, a ball, and a net, which has played a role in its gaining popularity. As of 2017 there were about 500,000 total pickleballers, and in 2021 that number has skyrocketed to 2,500,000.