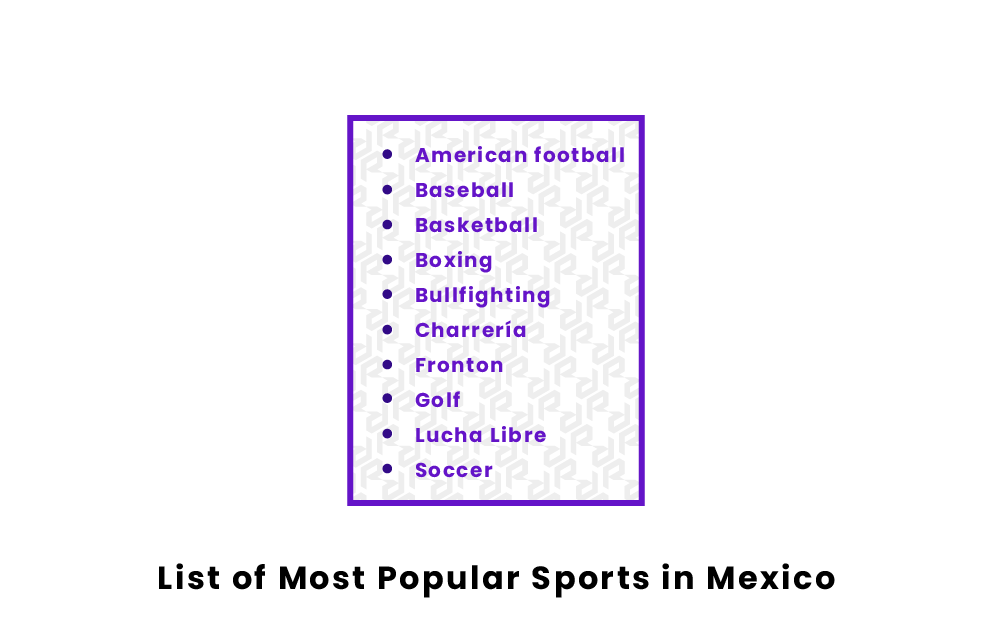 Sports have strongly influenced the formation and evolution of Mexican culture. A few of the more popular traditional Mexican sports include bullfighting, charrería, and fronton. Other popular sports include soccer, baseball, and boxing. Soccer is considered to be the most popular sport in Mexico, as it is frequently played all over the country. The sport also attracts the most Mexican viewers. Baseball and boxing are among the other most popular sports to watch and play in Mexico. Mexico has a professional baseball league that is split up into two leagues, the Northern and Southern League. Many of the top professional baseball players in the United States come from Mexico. Similarly, many of the world’s best boxers come from Mexico, including athletes such as Canelo Álvarez, Julio César Chávez, Carlos Zárate, and Salvador Sánchez.

What is the most popular sport in Mexico?

Soccer, or fútbol, is the most popular sport in Mexico. It is estimated that more than eight million Mexicans play the sport, and there are more than 17,000 teams within the country. Soccer was first brought to Mexico in the late 1800s and first played at the professional level in 1943. The country has four leagues for men’s professional teams, along with two leagues for women’s soccer. Mexico has also had the privilege of hosting the World Cup on two separate occasions.

What is the most watched sporting event in Mexico?

Soccer is the most watched sport in Mexico each year. One of the highest viewed recent sporting events was the FIFA World Cup qualifying match between Canada and Mexico in 2021. This match was aired on Telemundo Deportes and attracted up to 2.4 million viewers at one point during the broadcast. Other major soccer competitions, such as when Mexico plays in a World Cup game, frequently attract millions of viewers within the country and worldwide.

What is the national sport of Mexico?

Charrería is the national sport of Mexico. The sport was first introduced in Mexico during the 16th century and became the national sport in 1933. It closely resembles and had a strong influence on the formation of the American rodeo. Charrería is considered an equestrian sport that includes several competitions and features livestock like horses and cattle. The competitors, also known as charros, show off their skills with a lasso to perform various tasks along with strength challenges, such as bull riding.

Pages Related to List of Most Popular Sports in Mexico