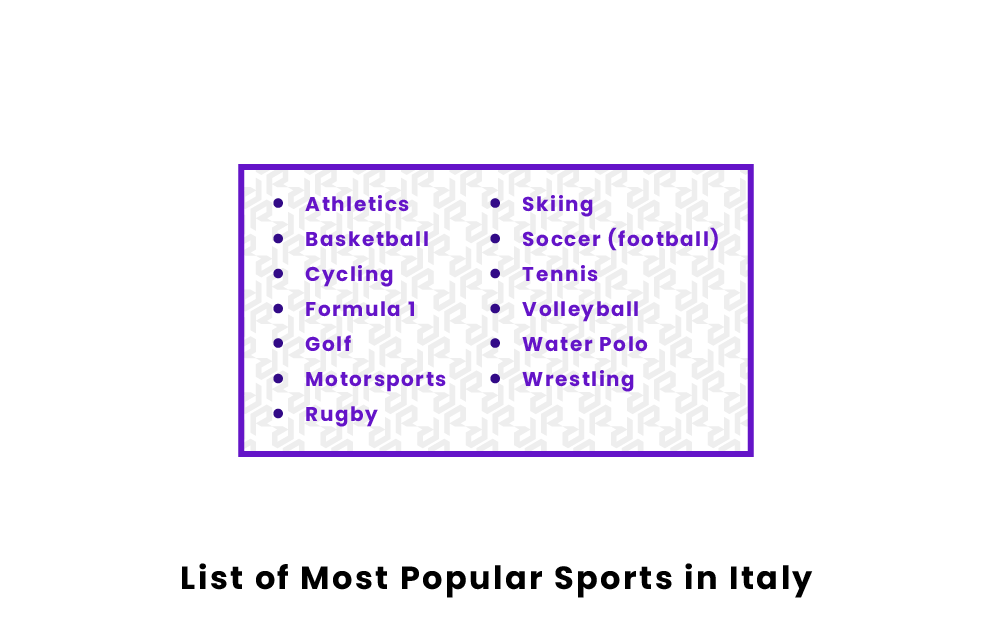 There are a wide variety of sports that are popular in Italy, encompassing the entire range of athletic abilities and interests. Centrally located in the Mediterranean Sea, Italy has a tremendous diversity of landscapes and climates, which make all kinds of exciting sports possible and popular. Like many of its fellow European countries, the most popular sport in Italy is football, also known as soccer in America. However, though soccer is overwhelmingly popular in Italy, dozens of other sports are also beloved there, including sports that take place on land, in water, and in the snow. Below, we include a list of some of the most popular sports in Italy.

What is the most popular sport in Italy?

The most popular sport in Italy is soccer, also known as football. Like in many other European countries, Italian culture has built a passionate and vibrant community around soccer, which is both a cultural pastime and a source of national unity. Italy’s national soccer league, the Serie A, contains 20 professional clubs, including popular teams such as AC Milano, Juventus FC, and AS Roma. There are over 4 million soccer players in Italy, from the amateur level to the professional, and famous Italian soccer stars have included greats such as Paolo Maldini, Roberto Baggio, and Francesco Totti.

What is the most-watched sporting event in Italy?

The most-watched sporting events in Italy are Serie A soccer matches and the soccer World Cup. Serie A dominates sports properties in Italy, with approximately 46.5% of the population watching soccer matches on television or in person. The most-watched sporting event in the history of Italy thus far was the pivotal semifinal match of the 1990 World Cup, which took place between Italy and Argentina, and was held in the Italian city of Naples. The match was viewed by approximately 27.5 million people and resulted in a 4-3 victory for Argentina after a penalty shootout in extra time.

What is the national sport of Italy?

Soccer is the national sport of Italy and has a centuries-long history in the country. The national soccer association of Italy, the Federazione Italiana Giuoco Calcio (FIGC), was created in 1898. Italy has excelled in soccer both in the European and World Cup Tournaments, winning four World Cup titles in the years 1934, 1938, 1982, and 2006. The top professional soccer league in Italy, Serie A, draws millions of viewers annually, and its most famous team is Juventus Torino, which has won 27 league titles in its history.

Pages Related to List of Most Popular Sports in Italy