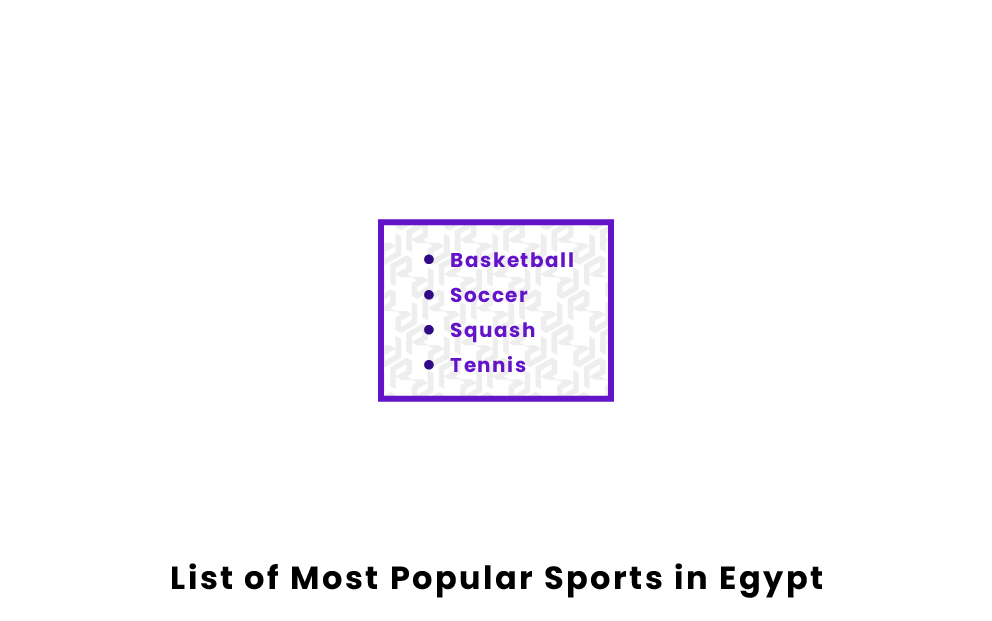 Egypt has hosted the Africa Cup of Nations in soccer multiple times, most recently in 2019, and has hosted the World Championships in pentathlon. In the Olympics, Egypt has won 38 total medals, nine of which are gold. Plus, Egypt is host to a multitude of professional leagues, including the Egyptian Premier League (EPL) in soccer and the Egyptian Basketball Super League. Mohamad Salah, a soccer player on Liverpool FC in England, is the most accomplished athlete from Egypt. The forward has won three English Premier League Golden Boots (the highest goal scorer), two PFA Players’ Player of the Year awards, and has finished third for the Best FIFA Men’s Player in 2018 and 2021.

What is the most popular sport in Egypt?

The most popular sport in Egypt is soccer. Thousands of fans rush into stadiums to watch the teams in the Egyptian Premier League, the highest division in Egyptian soccer. The rivalry that gets the most attention is the Cairo derby, where Zamalek and Al Ahly go head-to-head. Plus, the Egyptian National Team is a top-60 team in the entire world. That roster is headlined by Mohamad Salah, who is widely considered as one of the best soccer players in the world.

What is the most watched sporting event in Egypt?

The most watched sporting event in Egypt is the Cairo Derby, a soccer match between Zamalek SC and Al Ahly SC. These two squads are considered the best in the Egyptian Premier League and attract thousands of fans to venues. The matchup goes back all the way to the early 1900s, and fans of both teams have a bitter hatred for the other. In 2021, it was estimated to have a 50-million viewer television audience. Venues are always packed and when the two squads go head-to-head, it is a must-watch in Egypt.

What is the national sport of Egypt?

The national sport of Egypt is soccer. It is also the most popular sport as people in Egypt gather to watch soccer on almost a daily basis. Whether that be the African Cup, the FIFA World Cup, or the Egyptian Premier League, fans go to different restaurants and venues to watch soccer. With 18 teams competing for a title in the Egyptian Premier League, passion for the beloved game grew to an all-time high in Egypt.

Pages Related to List of Most Popular Sports in Egypt