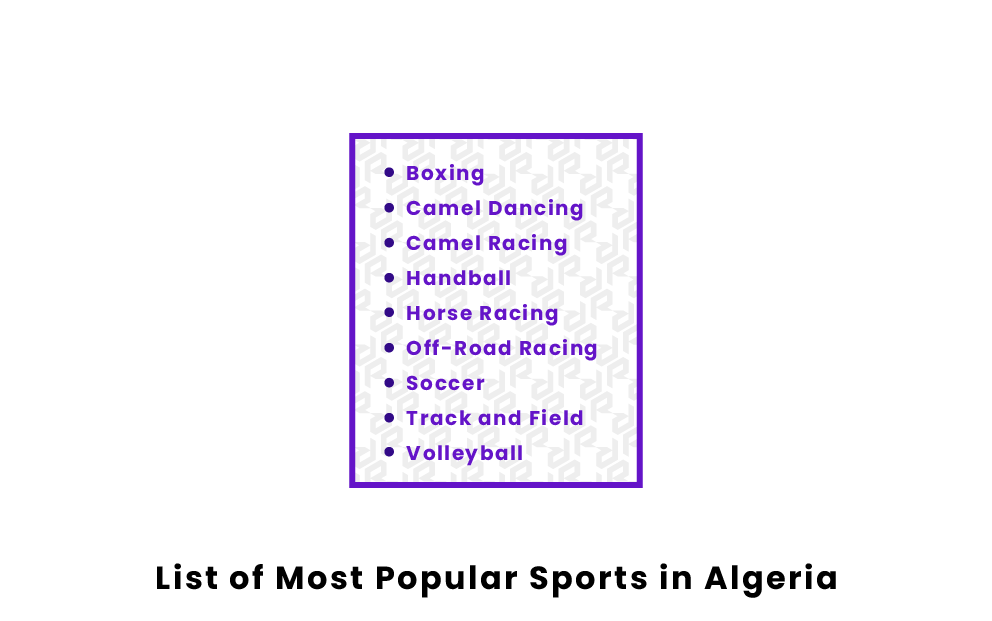 The tradition of sports in Algeria goes back hundreds of years, and it has given the country a combination of both traditional sports unique to Algeria and modern sports popular worldwide. Some of their sports are unique to the geography of Algeria, specifically their proximity to the Sahara Desert. This means that desert sports such as off-roading with dune buggies or quad bikes are very popular. They also practice more obscure desert sports such as horse racing, camel racing, and even camel dancing, which is when camels are trained to perform dances for an audience. Algerians are also very passionate about more typical sports such as soccer and track and field. Algeria has found success in the Olympic Games with a total of five gold medals, four of which came from running races.

What is the most popular sport in Algeria?

Like many other countries in the world, soccer is the most popular sport in Algeria. It’s the sport that many children grow up playing in their free time, and their national team has even found some limited success on the international circuit. In 1982, 1986, 2010, and 2014, Algeria qualified to play in the World Cup. They also won the African Continental Championship in 1990. Ever since then, they’ve been chasing that same success, but the sport remains as popular as ever in Algeria.

What is the most-watched sporting event in Algeria?

With soccer being the most popular sport in the country, it’s natural that soccer matches are the most-watched sporting events in Algeria. This means events such as the FIFA World Cup are extremely popular for people in the country. The Olympics are also popular, considering the numerous successes that Algeria has found in the Olympic Games. Depending on the region, it’s also popular to watch local sporting events, including those in the desert region, such as horse racing and camel dancing.

What is the national sport of Algeria?

Pages Related to List of Most Popular Sports in Algeria