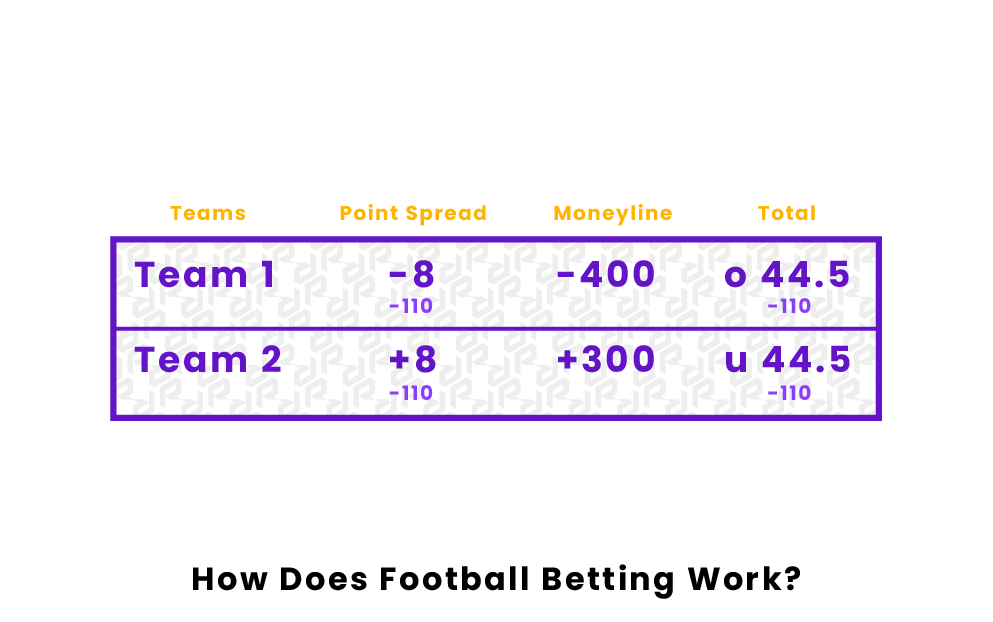 Betting is a common part of all sports, but in a sport like football, which has many moving parts, betting can be much more interesting and technical. Among the many types of gambling that football allows for, prop bets are some of the most interesting. They involve placing bets on specific players and actions they may achieve in a game. Read on to learn all about prop bets in football!

What are Player Prop Bets in Football?

A player prop bet in football is a bet on a player’s specific action or performance during a game. Prop bets do not take into account a player’s overall body of work, but rather their performance relative to a specific statistic. Prop bets can be made as part of a general gambling event or as part of fantasy football.

There are many kinds of prop bets in football, and the statistic at hand varies by position, as each position has different ways of scoring for their teams. Running backs, for instance, tend to be judged by yardage gained and points scored by running for touchdowns. A typical prop bet for a running back, therefore, could be something like an over-under on the likelihood of two rushing touchdowns, meaning that bettors have to decide whether the player in question will run for more or less than two touchdowns by the end of the game. There could also be a prop made on whether or not a running back can reach a certain number of rushing yards in a game.

A similar process applies to quarterbacks, with the only difference being that quarterbacks pass for yardage and touchdowns. Thus, a prop bet for a quarterback may look something like an over-under on the likelihood of three passing touchdowns. Quarterback prop bets could also deal with passing yards, number of interceptions thrown, and number of sacks.

Each prop bet in football is accompanied by a “line,” which is set by Las Vegas sportsbooks. Lines reveal the amount of money bettors must wager in order to receive the desired reward. Each line is accompanied by a +/- sign. A minus sign indicates that there is a high probability of a certain outcome according to Vegas projections, while a plus sign means the outcome is less likely.

For example, if the prop bet is an over/under on whether a running back will score two rushing touchdowns, and the over line is set at -135 while the under line is set at +105, this means that the running back is expected to rush for three touchdowns. Expectations are accounted for in each line. In this case, a bettor must wager $135 in order to win $100 on the over, compared to $100 for a payout of $105 on the under.

Identifying matchups and the likely pace of the game are essential to quarterback prop bets. If the opposing defense struggles to stop the pass game, it can be a sign you should place an over passing yards prop bet on that quarterback. Likewise, if your quarterback is facing a stifling defense, you should bet the under on yardage prop bets and avoid prop bets based on scoring.

There are a variety of prop bet options for running backs, so choosing the one with the best odds based on your predicted outcome is key. Matchups are also crucial, as a team facing a large deficit will abandon the run game in favor of riskier long passes, hurting the production of their backs.

Evaluating the strength of their quarterback is the most important part of prop betting on wide receivers and tight ends. The primary prop bet for both positions is on receiving yards, and a reliable quarterback is crucial to posting receptions.

When to Wager on Prop Bets

Prop bets are best-utilized when the bettor is uncertain of the game’s outcome. By placing a wager on a prop bet, the bettor is gambling on an individual player’s performance rather than the team as a whole. This gives the bettor a chance to win the wager even if the team has a poor collective performance.

For example, if a team loses a game by a score of 35-21, but one player on the losing team accounts for all 21 of their points by running for three touchdowns, bettors that took the over on that player’s prop bet will still win money even though the team lost as a whole.

What are prop bets?

Prop bets are bets in football where bettors place wagers on whether or not certain players will achieve particular goals during a game. For example, common prop bets involve whether a quarterback will throw three touchdowns during a game, or whether a running back or wide receiver will gain a specific amount of yards. The likelihood of prop bets is measured by an “over-under” system.

What are the best football player positions to prop bet?

The best positions to prop bet in football are quarterbacks, running backs, wide receivers, and tight ends. These players are best for prop betting because their roles on the field lend themselves to numerous bettable statistics, such as pass attempts, running yards, receiving yards, and touchdowns. All of these are easily quantifiable stats that can make betting easy and fun.

What are the “over” and “under” in prop betting?

In prop betting, the “over” and “under” represent the likelihood of a certain prop bet occurring during a particular game. The over is represented by a number with a minus sign before it, while the under is represented by a number with a plus. If the minus number is larger than the plus number, that indicates the bet is favorable, with the opposite meaning that it is unfavorable.