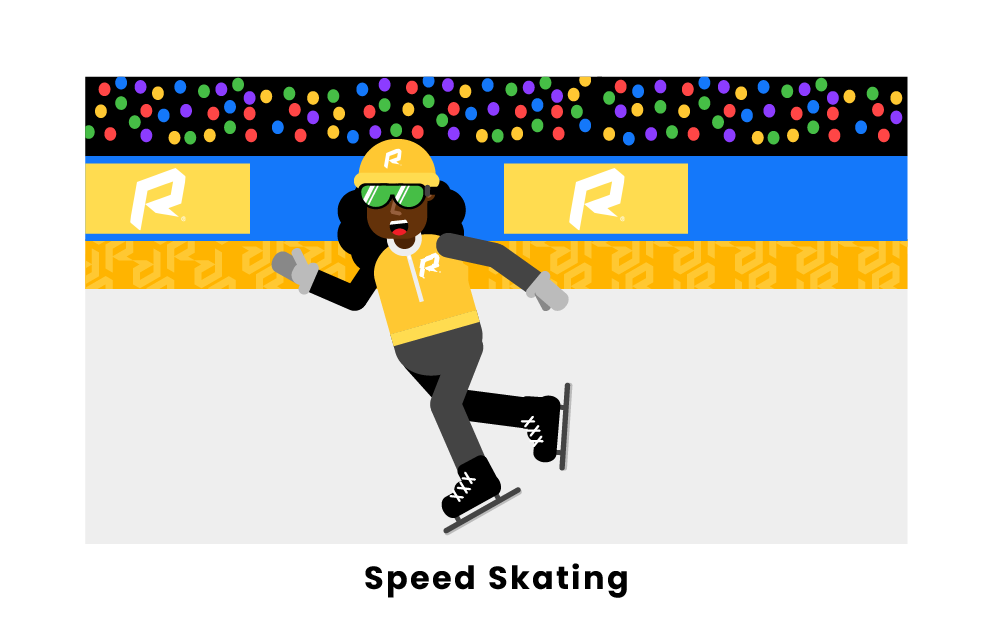 Speed skating originated in the Netherlands as people skated across frozen rivers and lakes. Eventually these turned into races. The origins go back as far as the 1200s. In time, groomed rinks and race tracks were created and organized racing became a sport. The first official speed skating competition was held in 1863 in Norway. Speed skating became an Olympic sport for men in the 1942 Winter Olympics. Women's Olympic speed skating was first introduced in the 1960 Winter Olympic Games. 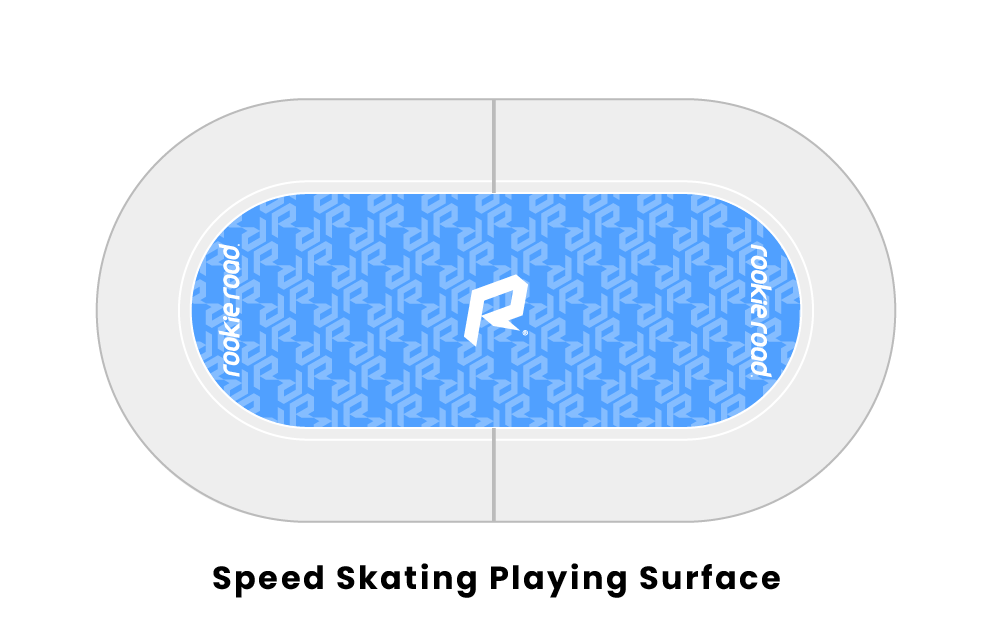 Long track speed skating takes place on 400 meter length ice tracks. Players compete two at a time. The track is split into two lanes, competitors switch between the lanes throughout the race. Skaters must switch lanes each lap. There is a designated area or zone in which players switch between lanes. 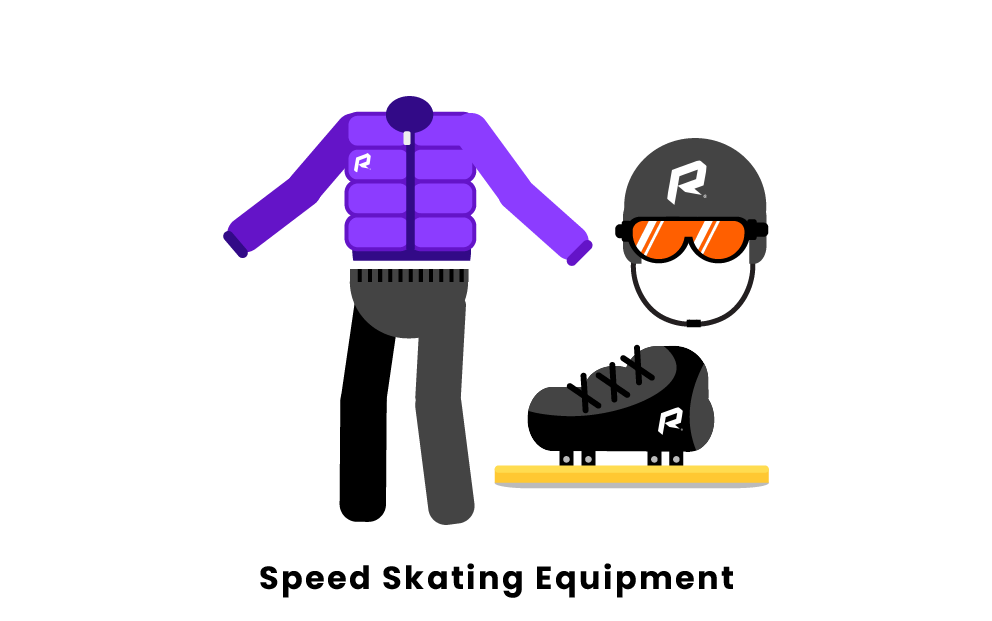 Not many pieces of equipment are needed in speed skating. Competitors need appropriate boots, skating blades, gloves, eye protection, and a skinsuit. The most important element is the skates themselves, consisting of boots and blades. Long track skates have very long blades. The boot disconnects from the blade on the heel so a competitor can get maximum push off of each step. Another interesting element is the glasses. Speed skaters wear eye protection, usually some type of goggles or glasses, to prevent their eyes from the cold wind. Skinsuits allow athletes to be more aerodynamic and thus increase their times. 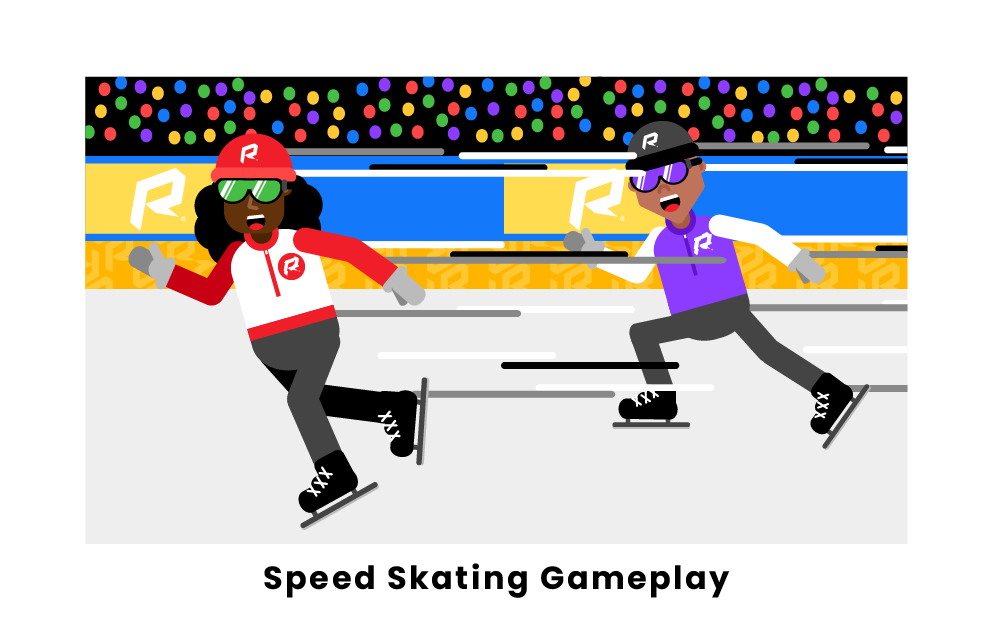 In traditional and professional competition, two competitors skate at once. There are two lanes on the track and competitors must switch between lanes on each lap. There is no physical contact between the competitors, and they compete for the best possible time. The length of races differ greatly, ranging from 500 meters to 10000 meters.

Another role is the coach. The coach, or coaching staff, are responsible for helping plan the competitors race out. 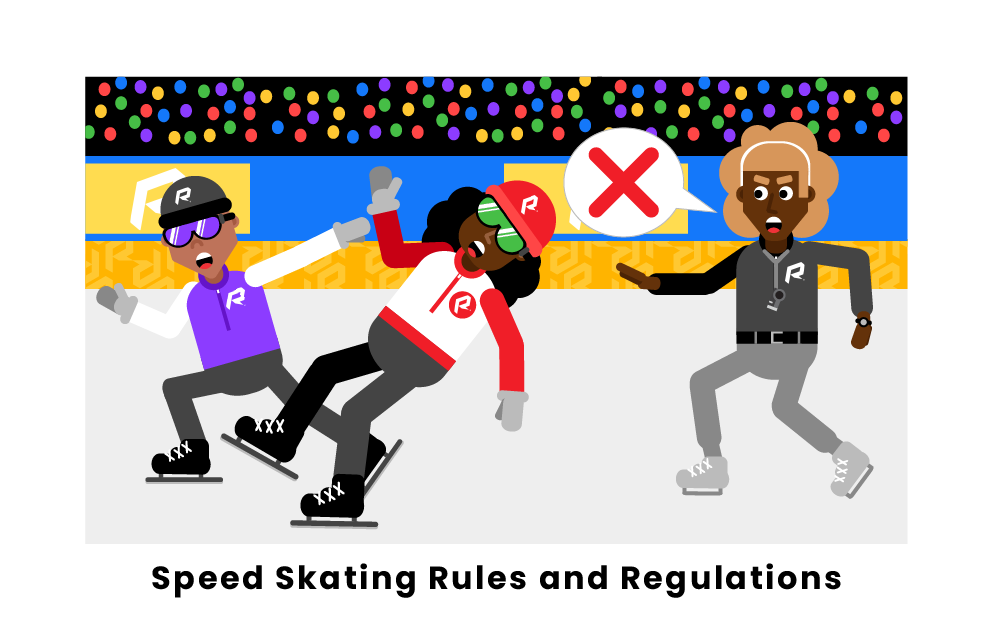 A main focus of regulation is on the track itself. It is very important that the size and quality of ice is up to par. There are also a few keys in competition rules. One false start is allowed before an athlete can be disqualified. The skater's foot closest to their competitor is allowed to cross the lane as long as their other foot remains within their own lane. The skater moving from the outer lane into the inner lane has the right away.

Each race has multiple referees, each with a focus on a certain area. The chief official is in charge of monitoring races, making sure the ice is resurfaced at an appropriate time, and numerous other tasks. The starter is focused on an equal start for all competitors. The recorder supervises race results and keeps track of final standings.

Speed skating has many unique terms and phrases. Further, there are some terms that you may be familiar with, but this will give you a better understanding. The list below will further explain a few of these: 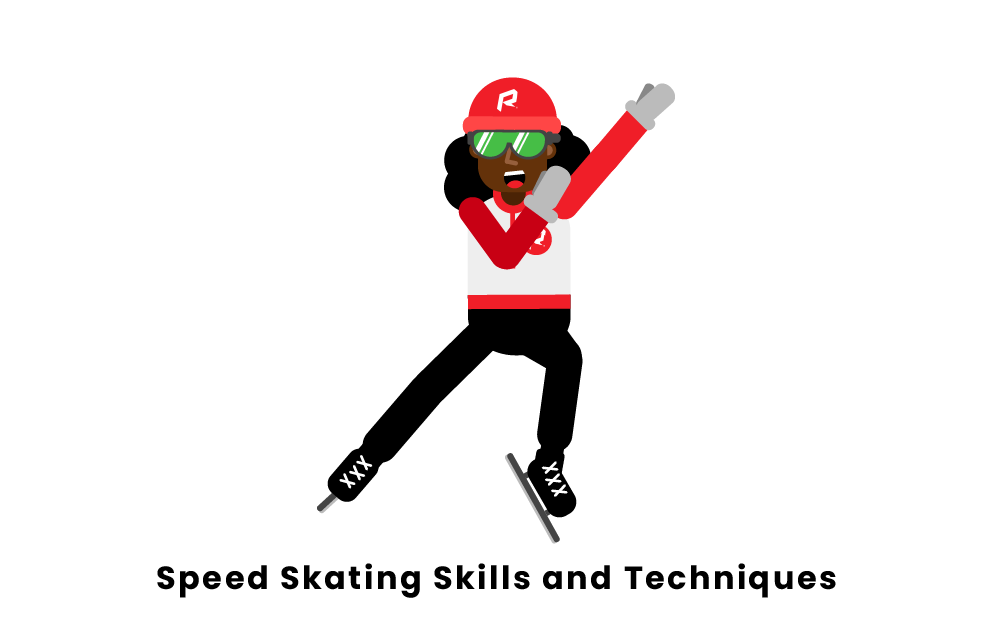 In speed skating, skaters use a crouched position while moving around the track.This positioning allows players to minimize air resistance.

When starting the race, some competitors begin by "running" to pick up speed quickly, but quickly they switch into a more gliding style. Others choose to skate off and use long leg extensions to begin their race.

It is important for competitors to have strong body control, an ice skating background or some skills in this area, and strong stamina/conditioning.

In speed skating the main strategy is conserving energy to fit the race. Depending on the length of the race it is important to pace yourself accordingly. A key point of decision making within the race is deciding when to cross lanes. It is important to avoid your opponent, but sometimes going in front of them is necessary. It is up to the competitor to decide whether to cross in front or behind.

There are multiple styles of speed skating in the Olympic Games. Styles include long track, short track, mass start, and team pursuit. Long track is the oldest style and has been in the Olympics the longest.

Speed skating has seen countless legends throughout the long history of the sport. The table below lists some of the all time greats.

The International Skating Union (ISU) is the governing body in charge of competitive ice skating internationally. This organization hosts multiple tournaments throughout the world. These tournaments are considered championships.

Although there are youth organizations, teams, as well as college and ameteur level teams, the highest level professional teams are national teams. The Netherlands have been the most successful and dominant country in the sport of speed skating. 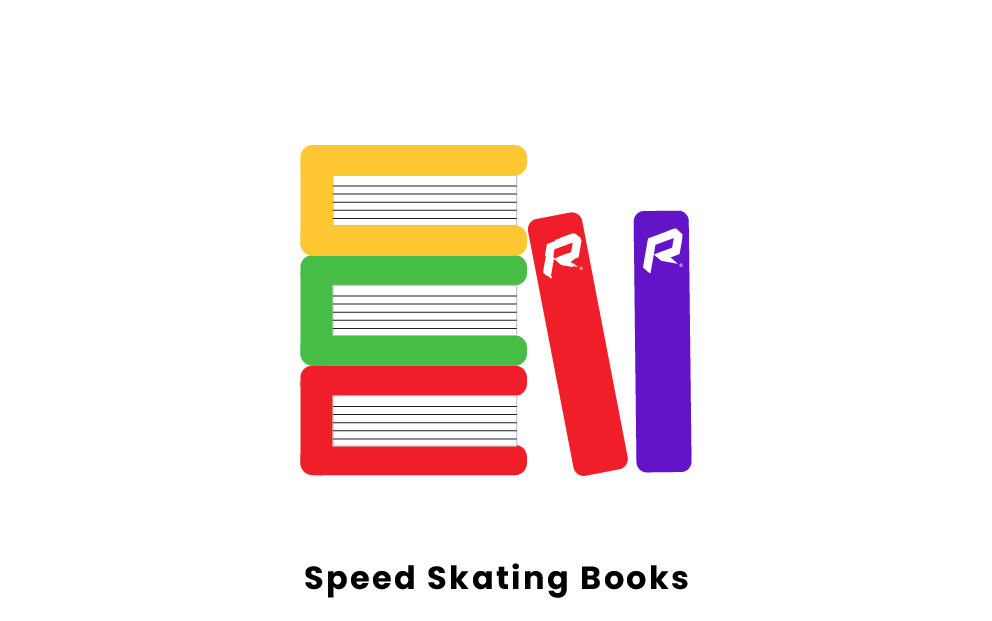 Many books written about speed skating either detail skills and training methods in speed skating, or are autobiographies written by former speed skaters. 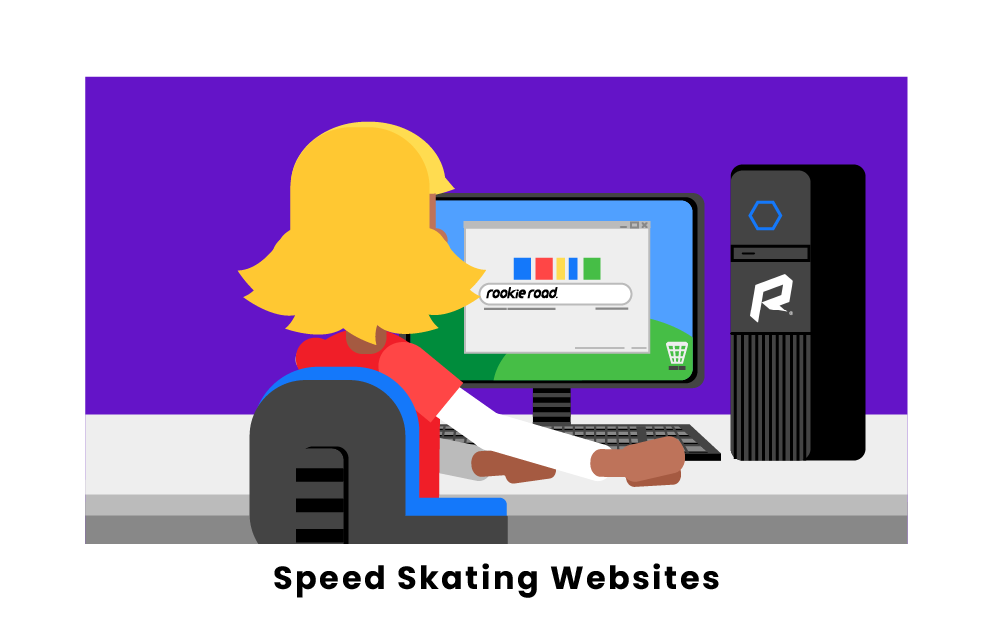 As any sport, there are countless websites and blogs that bring the speed skating community together.

Speed skating is a sport involving skating around an ice rink. The rink is 400 meters around, and two competitors race at once. There are two lanes around the "track" and players switch between the two lanes on each lap. The competitor with the faster time wins the race. The sport has been around for centuries, but is still dominated by the Netherlands who created the sport.

How fast is speed skating?

Speed skating is an extremely fast sport. Long track skaters go up to 35 mph in competition. However, depending on the race distance and the part of the race, speeds can heavily change.

How hard is speed skating?

How is speed skating played?

Speed skating is a competition between a group of individuals. Competitors face 1 other person at a time. They glide across the ice on skates and try to complete a desired distance in the shortest amount of time.

Is speed skating in the Olympics?

Speed skating has been in the Olympics since 1942. This is when long track speed skating was introduced. However, since then multiple new event types have been introduced.

Pages Related to What is Speed Skating?