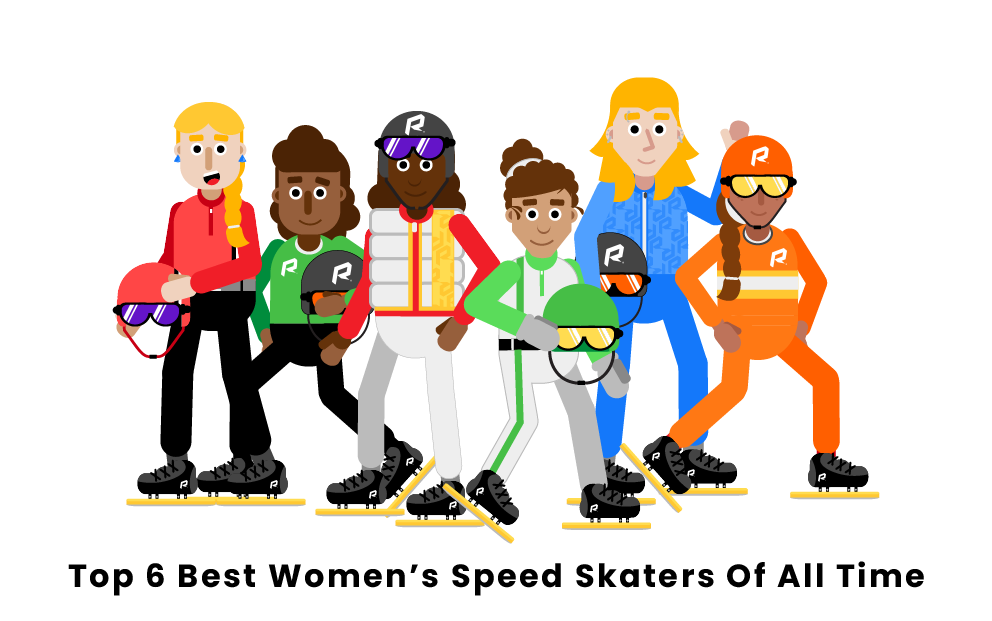 Who are the best women’s speed skating athletes of all time?

Wüst is the most decorated Olympic speed skater of all time. She is from the Netherlands and has competed in the Olympics since the 2006 Games in Turin. She became the youngest Olympic champion from the Netherlands after winning the 3,000-meter event in Turin and was later named Dutch Sportswomen of the year for her performance in the 2006 Games. Her dominance continued, and in 2014, she took home five Olympic medals, which was the most by any athlete at the Sochi Games. In 2018, she became the first Winter Olympian to win the gold in the same event in four consecutive Olympics, in her signature 1,500-meter event. Wüst’s 11 Olympic medals make her the most decorated women’s speed skater and the most decorated Dutch athlete in Olympic history.

Claudia Pechstein is a German speed skater known for her long-distance skating ability. She won three consecutive gold medals in the 5,000-meter event starting in the 1994 Games in Lillehammer. In total, she won nine Olympic medals and has competed in the Olympics since 1992. Pechstein competed in a total of seven Olympics and, in 2018, was competing in the Olympics at the age of 45. She was suspended in 2009 for blood doping and was forced to serve a two-year ban from any competition, which forced her to miss the 2010 games. When she returned to the sport in 2011, she won her 37th World Championship. Pechstein also appeared in both the 2014 and 2018 Olympic Games.

Karin Enke is a legendary German speed skater who rose to prominence during the 1980s. She competed in her first Olympic games at the age of 18 and won the gold in the 500-meter event. Enke competed in a total of 10 Olympic events during her career (over the course of 1980-1988) and medaled in eight of them. She barely missed the podium in her other two Olympic races, finishing fourth. Enke also set the world record for the 1,500-meter event twice. She did it once before the 1984 Olympic Games and then again during the 1984 Games. The 1984 Games in Sarajevo were her best performance, as she won two gold medals and two silver medals.

Bonnie Blair is an American speed skater known for her great 500-meter sprint speed. Her first Olympic Games were in 1984, and she would continue to participate in the Olympics until 1994. She broke the world record for the 500-meter event in the 1988 Games in Calgary, only minutes after one of her competitors broke the same record. This accomplishment helped her secure the gold medal in that event. She also won Olympic gold in the 500-meter event in both 1992 in Albertville and 1994 in Lillehammer. Blair won a total of six Olympic medals, five of which were gold.

Gunda Niemann-Stirnemann is a German speed skater known for her distance skating. She won a total of eight Olympic medals, including three golds. Her best events were the 3,000 and 5,000-meter events. She competed in a total of four Olympics, starting with the 1988 Olympics in Calgary and ending with the 1998 Olympics in Nagano. Along with her Olympic accomplishments, Niemann-Stirnemann won seven World All-Around Championships, including four in a row from 1995 to 1998. She also broke 14 world records, including six in the 3,000-meter event, four in the 5,000-meter event, and four in the combined all around.

Known as one of the most dominant speed skaters in the early 2000s, Friesinger-Postma, a German speed skater, has won a total of five Olympic medals. She started her Olympic competition in Nagano in 1988 and ended her Olympic career in Vancouver in 2010. Her one individual gold medal came in the 1,500-meter event at the 2002 games in Salt Lake City. Her other two gold medals came in the team pursuit event in the Turin Games in 2006 and the Vancouver Games in 2010. Outside of the Olympics, she won three World All-Around Championships and 12 Single-Distance Championships.

Who is the greatest female speed skater of all time?

The greatest female speed skater of all time is Ireen Wüst. She is the most decorated Olympic Speed Skater in the world with 11 Olympic medals. She won the 1,500-meter event in four consecutive Olympics, making her the first-ever Winter Olympian to accomplish that feat. Along with her Olympic success, she has won seven World All-Around Championships,15 Single Distance Championship gold medals, and 15 Single Distance Championship silver medals. Her accolades classify her as the most dominant women’s skater ever.

Who is the youngest female medalist in speed skating at the Winter Olympic Games?

The youngest female medalist in speed skating at the Winter Olympics is Andrea Mitscherlich from East Germany. At 15 years and 68 days old, she won the silver in the 3,000-meter event at the 1976 Innsbruck Olympics. This was her first of four Olympic games. She later went on to win a gold medal in the 3,000-meter event in the 1984 games in Sarajevo and won a total of seven Olympic medals throughout her career.