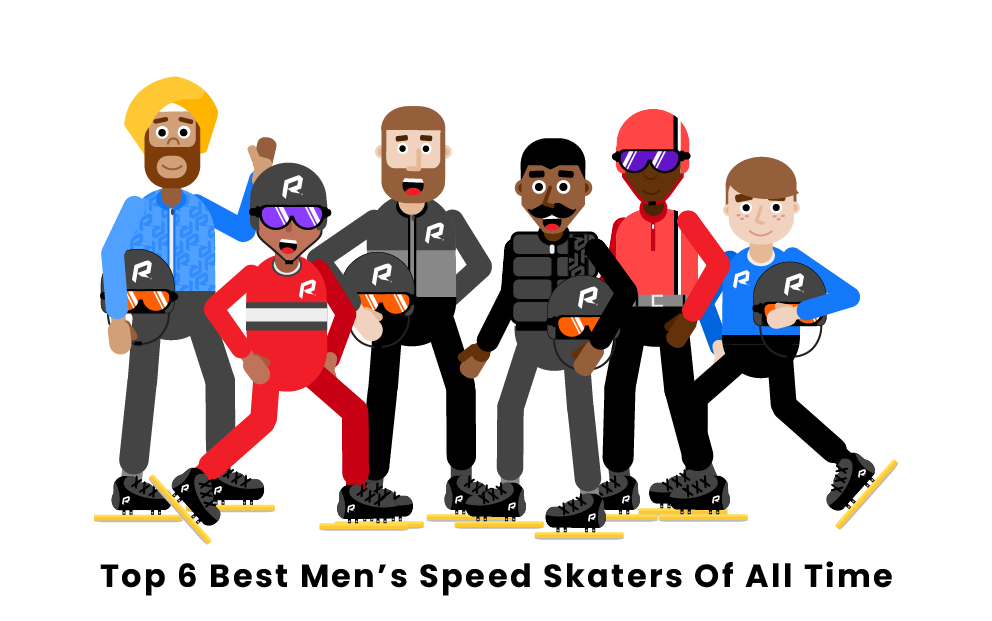 Speed skating is one of the fastest, most exciting Winter sports and requires athletes to be in absolute peak physical condition. Very few have been able to dominate the sport, let alone for an extended period of time. The six greatest speed skaters of all time have managed to do that, and that’s what separates them from the rest.

Who are the best men’s speed skating athletes of all time?

Eric Heiden is an American speed skater who made his global debut at the 1976 Winter Olympics at the age of just 17. Heiden didn’t medal at his first games, but it would serve as a stepping stone for him to become one of the most dominant speed skaters ever. During his peak years, which were from 1977 to 1980, Heiden managed to win three straight World Championships. He then went on to claim gold and set world records in all five speed skating events ranging from 500m to 10,000m at the 1980 Winter Olympics. His most dominant performance was in the final of the 10,000m event at the 1980 Olympics, where he shattered the previous world record by 6.2 seconds.

Sven Kramer is the most decorated speed skater in the history of the Winter Olympics with a total of nine medals, in addition to having the most World Championships of any skater ever. Kramer is the only skater in Olympic history to win gold three consecutive times in the 5000m event. He managed to set his first world record at the age of 19 in the 5000m event, which he would later break several times during a four-year span beginning in 2006 that saw him win 12 World Championships. Kramer didn’t slow down even as he began to reach the end of his prime, winning three consecutive All-Around World Titles in 2015, 2016, and 2017.

Shani Davis is one of the most unique talents in the history of speed skating, as he is one of only two skaters, the other being Eric Heiden, to win a World Championship in both the all-around and sprint events. Davis is also the first speed skater in history to win back-to-back Olympic gold medals in the 1000m event. He enjoyed more success in long track skating, but he was also a part of the 2005 short-track relay championship team. His role on the relay team proved to be especially crucial, as the United States relay team managed to place only sixth at the 2006 Torino Olympics following his withdrawal from the team.

Johann Olav Koss is a Norwegian-born speed skater that holds 11 world records. Koss dominated the World Championships for several years, beginning in 1990, before a successful 1992 Albertville Olympics where he won a silver medal in the 10,000m and gold in the 1500m. The 1994 Lillehammer Olympics is where Koss had his most impressive performances. He managed to win gold in the 1500m, 5000m, and 10000m while setting world records in all three events. His win in the 10,000m was one of the most dominant performances in Olympic history. He finished 18.7 seconds ahead of the second-place finisher, the second-largest margin of victory in Olympic history, and broke his own world record by nearly 13 seconds.

Yevgeny Grishin was one of speed skating’s earliest superstars. Grishin managed to set a Soviet junior record in his first-ever competition, which set the tone for the remainder of his career. He specialized in the 500m and the 1500m events, where he was the first person ever to break the 40-second barrier in the 500m and the first to break the 2:10 barrier in the 1500m. Throughout his career, he won 12 Soviet speed skating titles, 13 medals at the World Championships, eight gold medals at the European Championships, and managed to set 7 world records.

Clas Thunberg is the oldest Olympic speed skating champion ever, as he won two golds at the age of 34 in the 1928 Olympics. The Finnish skater wanted to try for another medal at the age of 38, but he decided to skip the Olympics due to the Olympic Committee’s decision to change speed skating from a two-man race to a group event. Aside from his Olympic success, Thunberg was a five-time World Champion. He competed until the age of 40, when he walked away from the sport holding four world records. He’s the oldest speed skater to ever set a world record, at the age of 38, and his record in the 1000m event would last for about 25 years before Yevgeny Grishin broke it.

Ivar Ballungrud is a former Norwegian speed skater who dominated the sport in the early 20th century. He enjoyed a competitive rivalry with Clas Thunberg as the two battled to win the majority of competitions in the 1920s and 1930s. Over the course of his career, Ballangrud won a total of seven Olympic medals, including four golds. He also won 11 medals in the World Allround Championships and six medals in the European Allround Championships, taking home four gold medals in each. Ballangrud broke five world records in his career, the 3000m, the 5000m three times, and the 10,000m.

Ard Schenk is a former speed skater from the Netherlands who is best known for his dominance in the 1972 Winter Olympics. In that rendition of the Winter Games, Schenk secured three gold medals. These first place finishes came in the 1500m, 5000m, and 10000m races. Schenk was also known as a dominant speed skater in Allround Championships, with three gold medals in the world championships and another three gold medals in the European championships. Above all else, Schenk set 18 senior speed records during his time as a speed skater. This stands as the most records ever broken by a speed skater, and involved him setting records for the 1500m, 3000m, 10000m, and Big Combination events during his career. With such previously-unseen dominance, Shenk cemented himself as one of the greatest speed skaters to ever take the ice.

Who is the greatest men’s speed skater of all time?

Eric Heiden is the greatest speed skater of all time, mainly in part to his complete dominance in the sport, particularly at the 1980 Olympics. At the 1980 Lake Placid Olympics, Heiden won and set World Records in the 500m, 1000m, 1500m, 5000m, and the 10,000m events, making him the only person in Olympic history to accomplish this. He set the World Record in the 10,000m by 6.20 seconds and managed to survive a near-fall in the 1500m, which makes his wins all the more impressive.

What is the difference between short track and long track speed skating?

Who has the most gold medals at the men’s World Speed Skating Championships?

Sven Kramer has the most gold medals at the men’s World Speed Skating Championships, both in individual events and all-around titles. Kramer has managed to win 19 gold medals in single-distance events at the World Championships. He also won the all-around event nine times. Kramer had one of the most dominant stretches of any speed skater ever in the four years following his disappointing silver medal finish in the 5000m event at the 2006 Turin Olympics.