How Does Scoring Work in Speed Skating? 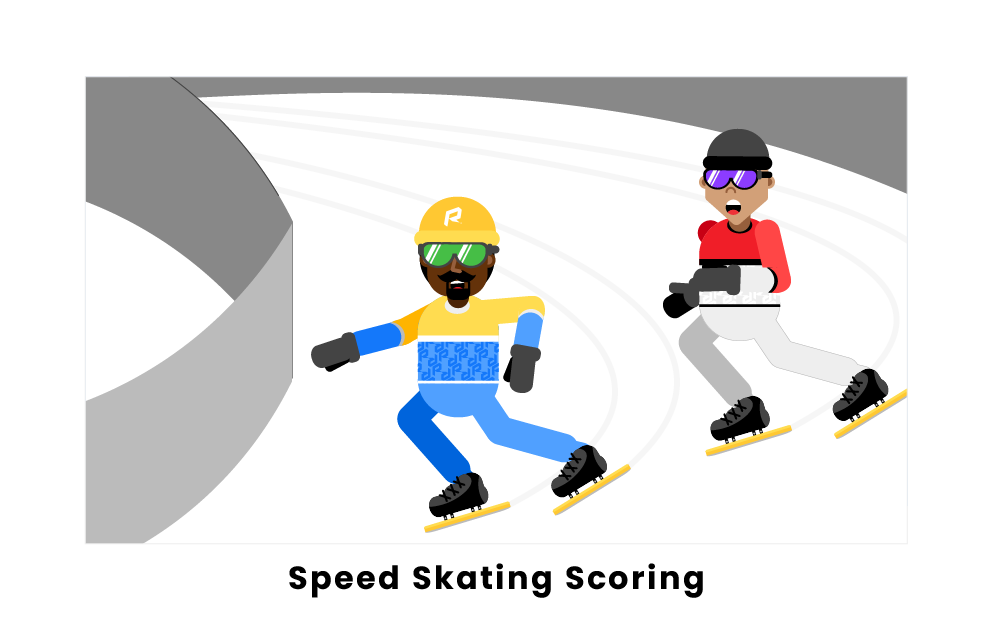 Speed skating is a popular sport that features a few different variations in the Winter Olympics. The sport involves multiple skaters racing around an icy track trying to finish with the quickest time possible. Let’s take a look at how scoring works in speed skating.

In speed skating, athletes are awarded points based on a system known as the Samalog Point System. In this system, a racer’s total points are based on their performance time per given distance in a 1:1 ratio. For example, if a skater covers the track’s distance in 33.45 seconds, they receive 33.450 points. This is the score announced if the length of the track is 500m. If the skater is competing in a race that is longer than 500m, the skater’s time is then converted into seconds per the aforementioned method and then divided by the number of 500m in the event. For overall competitions, final results are ultimately determined by combining the points which are accumulated for each distance raced. Since the goal of a speed skating race is to be the fastest, the overall winner is the skater with the fewest points.

Unlike certain skating events, such as figure skating, speed skating does not have a point-deduction system. This is likely due to the difficulty in deciding the amount of time a violation warrants in affecting the times of a race. However, there are various rules by which a skater or team of skaters can be disqualified from the competition. The most common is a false start, in which an athlete starts the race before it has officially begun. Each skater or pair is allowed one false start before they are disqualified. Athletes are also not permitted to skate inside their individual lane marks, except when entering a corner and the gliding skate, the one bearing the skater’s weight, remains outside of the line. If a skater breaks any of these rules or disrupts the performance of another skater or team, it is the judge’s call to disqualify the offending skater(s) once the race has concluded. If the judge believes any rule infraction has interfered with the race’s outcome, they may call for a fresh start and start the race over.

For individual events besides the mass start, Olympic skaters race according to the rules and scoring previously mentioned. The fastest competitors win the race.

For the team pursuit races, skaters compete in teams of three to be the fastest over the finish line. There are three phases (quarterfinals, semifinals, finals), with each winning team advancing to the next round when all three skaters cross the finish line before the other teams. The team with the fastest time ultimately advances or is awarded the gold medal.

For the mass-start event, skaters do not compete in pairs but instead all race together in a mass group, with their results being determined by sprint points. Sprint points are awarded during three intermediate sprints after laps 4, 8, 12, and the final 16th lap. After each intermediate sprint, the top three skaters to cross the finish lines are awarded 5, 3, or 1 points, respectively. After the final sprint, the first, second, and third skaters to cross the finish line will gain 60, 40, and 20 points, respectively. The athletes with the most sprint points by the end are awarded the gold, silver, and bronze medals.

What is the scoring system in speed skating?

The point system used to score speed skating is called the Samalog Point System. A racer’s total points are based on their performance time per given distance in a 1:1 ratio (e.g. 33.45 seconds = 33.450 points). If the skater is competing in a race that is longer than 500m, the skater’s time is then converted into seconds per the aforementioned method and then divided by the number of 500m in the event. For example, if a skater clocks a time of 1 minute and 40 seconds (100 seconds) in the 1500-meter event (three 500-meters), their score will be 33.333 (100 seconds/3). The overall winner is the skater with the fewest points.

How does speed skating scoring work in the Olympics?

In individual Olympic events, skaters are awarded points based on the Samlog Point system. The fastest skater wins. Team pursuit events are also won by skaters with the fastest times but advance through each round single-elimination style. The team with the fastest time advances. For the mass-start Olympic competition, skaters are awarded sprint points based on where they are at laps 4,8, 12, and 16.

What are sprint points in speed skating?

For the mass-start event, skaters all race together in a mass group, with their results being determined by sprint points. Sprint points are a system designed for mass-start events only, with points being awarded at four intervals throughout the race. After an intermediate interval, the three first skaters to cross the finish lines receive 5, 3, or 1 points. After the final lap is completed, the top three are awarded 60, 40, and 20 points. Whoever receives the highest number of sprint points by the end of the race wins the gold medal. The two closest receive silver and bronze.

Pages Related to How Does Scoring Work in Speed Skating?