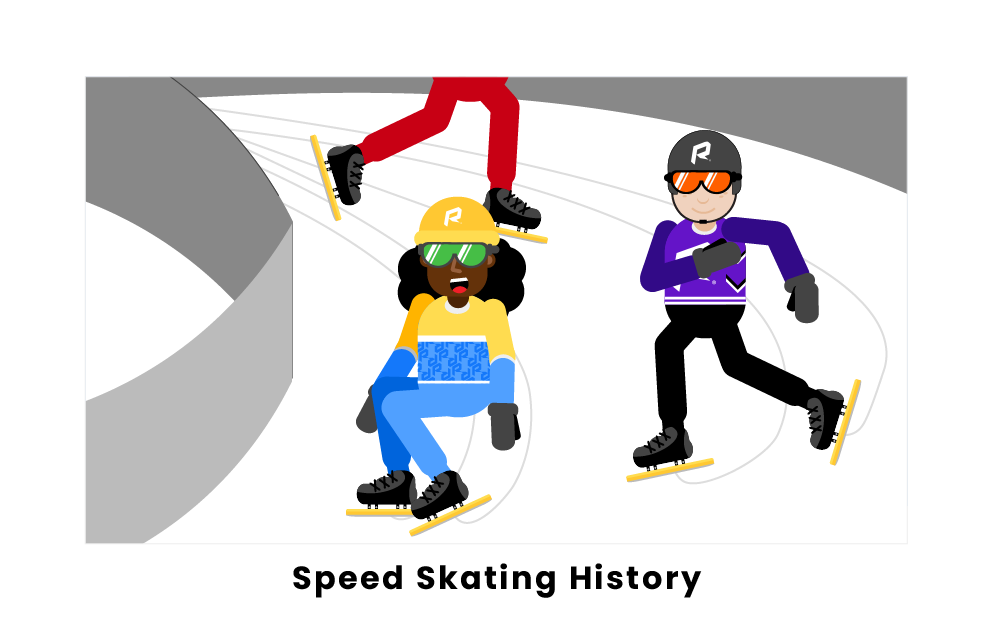 Speed skating is a fast-paced ice sport with an extensive history over the course of hundreds of years, highlighted by its inclusion in the first Winter Olympic Games in 1924. Over time, the popularity of the sport has grown significantly. Keep reading to find out how speed skating became one of the most exciting cold-weather sporting events for both men and women.

Speed skating has been around for far longer than you might imagine. While there is no singular person credited with founding the sport, it is believed that people in the Netherlands have been skating on ice since the thirteenth century. What was initially to be a means of transporting messages between towns and villages became a fun pastime to test one’s skill against others. As the messages that the skaters delivered spread, so too did their sport. Before long, people all over Europe were finding frozen bodies of water to skate on.

As the sport’s birthplace, the Netherlands understandably held the first known skating competition, but organized international competitions were taking place by the nineteenth century. These early competitions only included Dutch, Russian, American, and English teams, but speed skating would soon spread to a much broader audience by way of the Olympics.

The first-ever Winter Olympic Games took place in 1924 and were held in Chamonix, France. Only men were allowed to compete in speed skating at these first games, but women’s events were added eight years later at the Lake Placid Games. At the 1932 Olympic Games, the Americans decided to experiment with the start times, allowing for a mass start as opposed to the traditional European two-person start. In response, Europeans boycotted the event (allowing the Americans to win the golds). The two-by-two start was quickly reinstated, but the Americans’ experiment led to the creation of short-track speed skating.

Although women were allowed to compete in speed skating at the 1932 Olympics, the event was not an official part of the program. It took until 1960 at the Olympic Games in Squaw Valley, California, for women’s speed skating events to be added.

Fans of winter skating sports may have noticed that the skates used in speed skating don’t look like other sports like hockey or figure skating. Speed skates have a longer and thinner blade than other skating sports because athletes benefit from a longer stride. Speed skaters also benefit from clothing that limits air resistance, hence the hooded skin-tight suits as opposed to bulky pads or elaborate costumes. All of this, in addition to the clap skate which the Dutch introduced in 1996, is meant to help speed skaters move as quickly as possible. If the events weren’t already competitive or entertaining enough, by 1998, skaters were required to race twice in each heat to eliminate any unfair advantages that may result from skating in the inner lane.

What is the history of speed skating?

Speed skating started with the Dutch in the thirteenth century. People raced over frozen lakes, rivers, and canals to share news between different settlements. Once ice skating reached England, it was only a matter of time before ice rinks and clubs began to crop up. International competitions were taking place by the nineteenth century, and it was a featured sport in the Winter Olympic Games by 1924. Since then, the sport has expanded to include women and even spawned a few spin-off sports.

Historians have struggled to identify a person or persons who are responsible for inventing speed skating. Instead, they credit the Dutch people as a whole with the founding of the sport. Speed skating exists because the Dutch needed to traverse icy terrain to communicate with each other. Thanks to them and their need for speedy, efficient modes of travel, we have the modern sport that still excites and connects us all to this day.

Where did speed skating start?

Speed skating started in the Netherlands. This is an area that’s known for its cold weather, especially in the winter season. It should come as no surprise that the Dutch were among the first (if not the first) to strap on ice skates and learn to move across frozen lakes and rivers. At first, the Dutch just needed a way to communicate between villages, but speed skating soon outgrew its intended purpose.