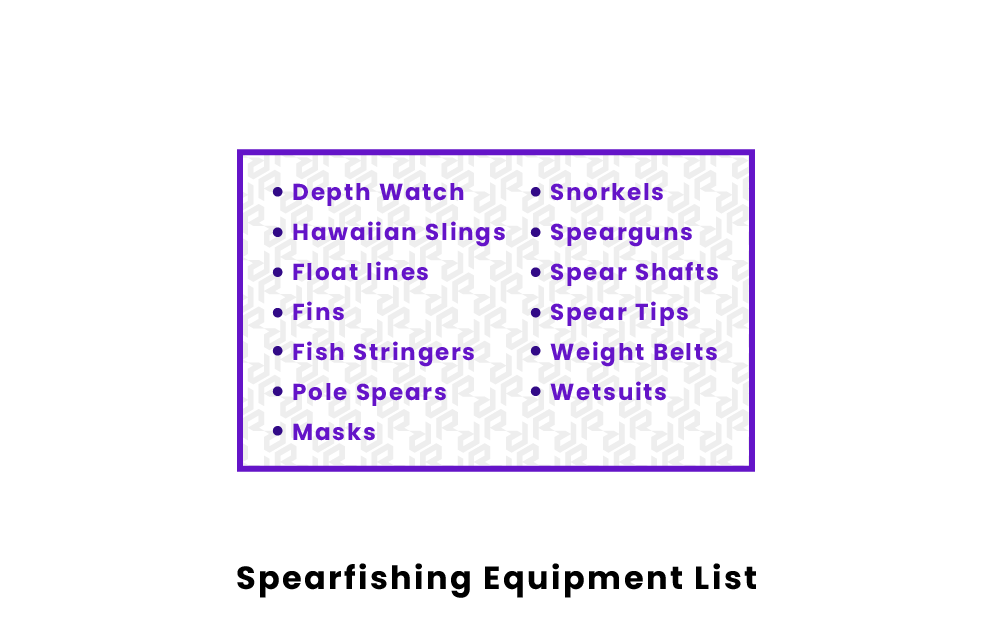 Spearfishing is a fast-paced, underwater activity that tasks divers to plunge underwater in hopes of hunting down a fish without the use of an oxygen tank. With this strenuous activity comes an equally specific set of equipment that all divers must be well equipped with at all times if they hope to have a successful outing. A few of the most common pieces of equipment include wetsuits, spearguns, and snorkels, all of which aid the diver before and after they decide to go after a fish.

Maximizing time spent underwater is one of the most important aspects of a successful spearfishing voyage. The most efficient way that modern spearfishers do this is through the use of a depth watch. These devices, also known as freediving watches, are used to track the depth and time each diver spends underwater, ensuring that adequate safety measures have been met during the course of a dive. In addition, some watches have the capability to sense the presence of fish within a given radius, which also adds to the efficiency of the dive. Watches of this type are fairly expensive, running anywhere from $100 to $1,000, depending on the features they offer.

A Hawaiian sling is one of many devices that divers can use to catch prey while spearfishing. The device only has two components: the metal spear and the rubber tubing. All the diver must do to operate this device is pull back the spear into the tubing and release it upon finding a target. Hawaiian slings are best for intermediate-range targets, as they require quite a fair amount of precision when used properly.

A float line is a long piece of string-like tubing that clasps onto both the diver and any other piece of equipment, allowing divers to let go of items as they please without having to worry about losing them. Common items that divers attach to float lines are spearguns, pole spears, and flashlights, although virtually any piece of equipment that goes underwater with the diver can be attached to one if need be. Float lines are not too expensive, usually costing around $10 to $70.

Spearfishing fins are elastic pieces of rubber that divers can attach to their feet in order to navigate underwater more steadily. Fins of this type come in two basic designs: open heeled and closed heeled. Open heeled fins do not encapsulate the entire foot, generally leaving the diver with some, but not complete control of their swimming motion. On the other hand, close heeled fins do cover the entire foot, giving a firm, yet complete feel to the swimming motion to most experienced divers.

A fish stringer is a piece of spearfishing equipment that keeps an already caught fish alive while still preventing it from getting away. After the fish is caught and brought back onto a boat or canoe, the diver can apply one of these devices by hooking it in the fish's mouth, and tying a knot with the string provided. Fish stringers can be used for all types of fishing; however, they are especially common with the small fish typically associated with spearfishing.

A pole spear is a long, sharp piece of spearfishing equipment that can be used to manually catch fish in conjunction with spear tips and rubber slings. The functionality of a pole spear is quite simple when compared to other spearfishing weapons. Once submerged in water, all a diver must do to catch a fish is poke their intended target with this piece of equipment. Pole spears are used to catch smaller prey, as most only measure 4 to 7 feet in length.

In the context of spearfishing, masks are used to aid and protect the diver's vision as they search for fish. Most of them have smooth, clear lenses that allow the diver to see clearly in both directions, allowing the diving to get up close to their target. It is important to note that, unlike some diving equipment, spearfishing masks do not supply oxygen to the diver, as the sport takes place without any sort of oxygen aid. High-quality masks can cost up to $100, while cheaper ones can be found for as low as $20.

A snorkel is a piece of spearfishing equipment that allows divers to scope out prey for longer periods of time from above the service through the use of a tubular breathing device. To use a snorkel, the diver must put one end of the device in their mouth while the other side rises above water level, allowing air to flow to the diver. Over the course of a long hunt, snorkels save divers a significant amount of preparation time, making the hunt much more efficient. Most high-end snorkels cost well above $100; however, cheap ones can be found for as low as $10.

A speargun is a high powered device that fires off a spear at the diver's intended target upon the press of a trigger. There are many different types of spearguns, some of which aim to hunt down large fish at higher spear speeds, while others hope to shoot more precisely at lower speeds. As such, the hunting range of a speargun depends upon the exact make and model; however, most have the capability to fire between 5-15 meters away from the diver's target.

A spear shaft is another piece of spearfishing equipment that is necessary when putting together a complete spear. Specifically, the shaft is the long, skinny portion of the spear that connects the spear tip to the base. Most spear shafts are made of forged steel, making them extremely durable and versatile in both Hawaiian slings and Spearguns. Spear shafts are generally bought in large packs, but individual shafts can be purchased for a price $20-$100, depending on their quality.

A spear tip is a small, sharp piece of spearfishing equipment that screws or hooks on to the tip of a spear. Spear tips are necessary attachments for both spearguns and Hawaiian slings, and they come in several different forms. Triple-pronged tips, which have three separate spikes, and single-pronged tips, which have only one spike, are the two most commonly used types of spear tips. In a similar way that standard hooks are essential for normal fishing, spear tips are equally as essential for spearfishing because they pierce through the intended target upon impact.

A weight belt is a rubber-like material that carries a predetermined amount of weight down with the diver, allowing them to sink to their desired depth more easily. Because of weighted belts, divers do not have to fight the water pressure when hunting down fish underwater. As a general rule, divers should look to carry around 10% of their body weight down with them. Although this piece of equipment is not absolutely necessary, the majority of divers prefer to use some sort of weight system, as it helps get them into the proper position quickly before striking.

A wetsuit is a protective piece of clothing, usually made of foam neoprene, that most divers wear to keep warm during spearfishing trips. Although wearing a wetsuit is not absolutely necessary for spearfishing, most divers tend to be in colder water when hunting, so they are considered a fairly necessary piece of equipment in the sport. Wetsuits come in all shapes, sizes, and qualities, so finding one that fits your exact body type is essential to have the most optimal spearfishing experience.