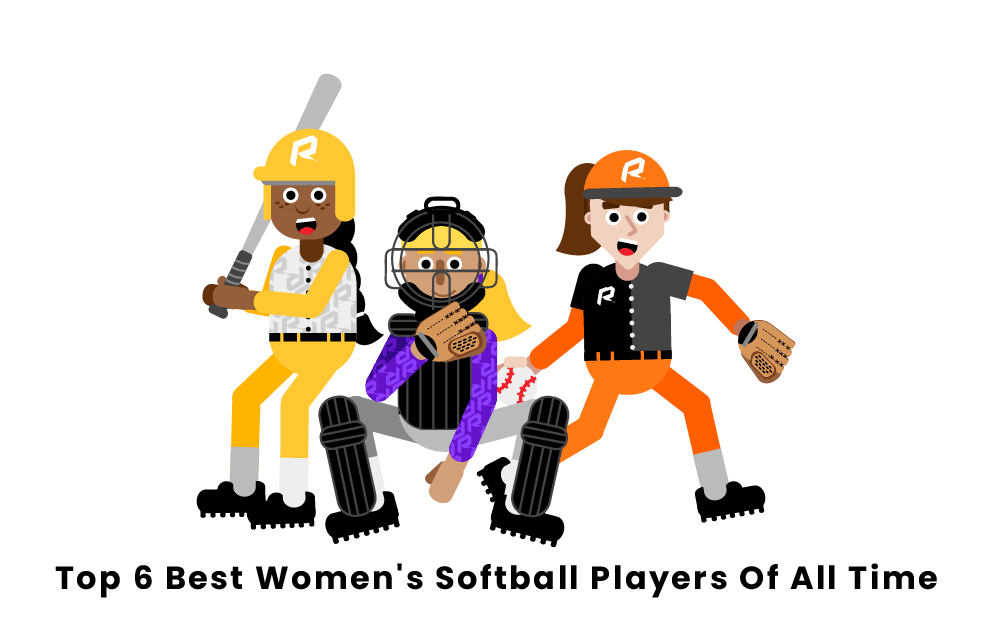 Softball is a bat and ball sport that has grown extremely popular in recent years. The sport is very similar to baseball, but with a few crucial differences including the type of ball, length of game, size of the field, and pitching motion. In softball, there are seven innings in which each team will have the chance to both hit and field. Teams are required to get three outs every inning in order for the game to progress. To score, a player must safely make it around all three bases and touch home plate, without being ruled out. The team with the most runs at the end of seven innings is declared the winner. Below are some of the best softball players to ever take the field.

Who are the top 6 best women's softball players of all time?

Joan Joyce was a world-class athlete that competed in fastpitch softball, basketball, golf, and volleyball. While playing basketball on the United States Women's National Basketball Team in 1964-65, Joyce broke the national tournament record for points scored in a game (67). She has been inducted into 19 different halls of fame for her performance across various sports. However, her primary sport was softball.

Joyce was more than just an impressive pitcher, though. She also holds softball records for doubles (153), triples (67), and single-season batting average (.437 in 1971). Joyce also holds the record for doubles in a season (22; 1968) and led the Brakettes in batting in six different years.

One of Joyce's most famous anecdotes involves striking out legendary baseball player Ted Williams at an exhibition game in 1961. She was still 21 at the time, while Williams had just retired from baseball.

Dot Richardson earns the number two spot on this list because while she never put together the consistent, sustained dominance of Joan Joyce, Richardson used her athletic abilities to spread the popularity of softball to a much wider audience. Of course, Richardson had her fair share of dominance on the diamond as well.

Dot Richardson's softball playing career began in 1972, and three years later at the age of 13, she became the youngest player to ever compete in the Amateur Softball Association of America Women's Major Fast-Pitch National Championships, which her team, the Orlando Rebels, won.

After a stellar college career with the UCLA Bruins (highlighted by three NCAA All-American honors, an NCAA Player of the Decade award, and an NCAA Championship in 1982) Dot Richardson played professionally for the Florida Rebels, Raybestos Brakettes, and California Commotion. She was MVP of the National Women's Major FastPitch National Championship four times.

Richardson played shortstop for the USA's national softball team, which won the first-ever gold medal for softball at the 1996 Summer Olympic games. Team USA followed it up with another gold medal at the Summer Olympics in Sydney four years later. Richardson was arguably the team's best player throughout both winning teams, and her passion on the field captured the attention of many around the country.

After winning two gold medals, Richardson became an orthopedic surgeon and head coach of the Liberty University softball team. In her first eight years as head coach, Richardson has taken the Liberty program from a record of 11-46 in 2014 to 47-12 in 2018. In their extremely successful 2018 season, Liberty went on to record a 1st place finish and reach the NCAA Columbia Regional.

Lisa Fernandez earns the third spot on this list for her incredible college and international career. Fernandez played for the UCLA Bruins from 1990 to 1993. In those four years, she won three Honda Awards (awarded to the best softball player in the nation), appeared on four All-American first teams, was part of two College World Series-winning teams, and won the 1993 Honda-Broderick Cup (given to the best collegiate female athlete across all sports).

Fernandez both pitched and batted impressively at UCLA, posting a college ERA of 0.22 and a batting average of .381. She was named the #1 Greatest College Softball Player by the NCAA.

But her incredible career did not end at the college ranks. Fernandez helped lead the United States Softball Team to three straight gold medals, starting with the 1996 Olympics in Atlanta and continuing through the 2000 Olympics in Sydney, Australia, and the 2004 Olympics in Athens, Greece. In the 2000 Olympics, she struck out an unprecedented 25 batters in one game, setting the record for strikeouts in a game.

Fernandez is now an assistant softball coach at UCLA.

Jennie Finch began pitching at the age of eight. By the time she turned 15, Finch had already won two ASA National Softball titles with her youth team, the California Cruisers.

Finch attended the University of Arizona from 1999-2002, amassing truly groundbreaking numbers along the way: 51 wins in a row, 35 shutout innings in a row (she did this twice), three first-team All-American honors, a record of 119 wins to 16 losses, a pitching ERA of 1.08 and a batting average of .301.

The silver medal was a subject of extreme disappointment for American softball players and fans alike. Before the 2008 Olympics started, it had been determined that softball would be removed from the list of Olympic sports, along with baseball, in reaction to baseball's doping scandals. Everyone knew this could be the last softball competition in the Olympics, but Team USA lost 3-1 to Japan, their only time not winning gold.

Softball has since been added back to the 2020 Olympic docket.

Cat Osterman, a left-handed pitcher, established herself as one of the greats at the University of Texas. She pitched her way to numerous Division I records, including the most ever NCAA Division I Player of the Year awards (3) and four All-American selections. Osterman is first all-time in career strikeouts per 7 innings (14.34), Big 12 Pitcher of the Week Awards (25), perfect games (7), and Big 12 Pitcher of the Year awards (4). She is second all-time in strikeouts (2,265) and third in shutouts (85) and no-hitters (20).

Osterman also starred in the National Pro Fastpitch (NPF) league. Her rookie strikeout ratio of 12.5 set a new league record (although it has since been broken). She finished with an NPF career ERA of 0.91, 1,260 strikeouts, and a 95-24 record.

While Jessica Mendoza may not have the outstanding career statistics of some of the others on this list, her work as a broadcaster for ESPN helped to pioneer female involvement and exposure in baseball, as well as being an outspoken advocate for softball.

Usually, softball pitchers get the bulk of the credit for offensive and defensive performances, but as an outfielder, Mendoza demanded respect at the plate.

Mendoza played with the USA National Softball Team alongside Jennie Finch and Cat Osterman, among many other greats, winning a gold medal in 2004 and silver in 2008. Her career batting average with Team USA is an impressive .432.

Mendoza joined the NPF in 2005, posting a .491 batting average in her rookie season. She played a total of four years in the NPF, split between the Arizona Heat and the USSA Pride.

Mendoza joined ESPN's Baseball Tonight broadcast team in 2014 and has worked with ESPN and the New York Mets ever since.

Crystl Bustos is an American softball player known for her impressive ability to hit home runs. Nicknamed "The Big Bruiser", Bustos holds the record for most home runs in an Olympic matchup, with six. She began her softball career in Little League and progressed to play collegiate softball at Palm Beach Community College. She went on to play professionally in the WPSL and the NPF league. Bustos was an infielder and designated hitter for her teams.

Bustos was a member of the 2000, 2004, and 2008 Olympic teams, taking home two gold medals and one silver medal. Additionally, Bustos is a two-time Softball World Cup winner, a three-time Pan American Games gold medalist, and a Softball World Champion in 2006. She played softball professionally for just over eight years before her retirement in 2008. In that same year, Bustos was named the 2008 USA Softball Player of the Year. Her batting ability and impressive accolades speak for themselves, making Crystl Bustos a legend in the softball community.

Natasha Watley is another star softball player who didn't quite make our top six rankings. That being said, she certainly has more than enough merit to make her an all time great within the sport. Some of her career accomplishments as a first baseman/shortstop include an Olympic gold medal in 2004 with Team USA, being named an All-American four times during her collegiate career with UCLA, her five championship wins in the Japanese Softball League, and her 2014 induction into the UCLA Athletics Hall of Fame. During her career with UCLA, she won three consecutive Women's College World Series titles and even secured the 2003 NCAA Division 1 Softball Championship.

Statistically speaking, Watley was a force to be reckoned with on the diamond. Most notably, she is part of an exclusive club within D1 softball players to hold a career batting average upwards of .400, while also having 300 career hits, 200 career runs, and 100 career stolen bases. These are truly eye-popping statistics, and leave fans no room for doubt regarding whether or not she is an all-time softball great.

Perhaps even more admirable than her career on the field, since hanging up her cleats Watley has gone on to give back to the community as a motivational speaker that tours inner city schools. Watley is a true embodiment of what it takes to be a great player both on and off the field.

While she doesn't necessarily sport the same statistical dominance as some of the other players on this list, Laura Berg is nonetheless an integral part of softball history. From her playing days with Fresno State to her performances in the Olympics, Laura Berg has offered tremendous skill and longevity throughout the course of her career.

To date, Berg is the winningest Olympic softball player of all time. She has won three gold medals (1996, 2000, 2004) and a silver medal (2008) while representing Team USA in the outfield. These Olympic runs are highlighted by her 2008 performance, in which she batted an astonishing .460. In her Olympic career Berg had a batting average of .362, no small feat on the world's biggest stage. Berg also secured four gold medals in the WBSC (1994, 1998, 2002, 2006), leaving her with a remarkable track record of dominance throughout her time as a player.

Since retiring from the sport, Berg has gone on to coach Oregon State's softball program. Her coaching career has spanned from 2013-2020 thus far, with four NCAA regional appearances and a career-best 30-20-1 record in 2016.

Who holds the record for most strikeouts in NCAA DI history?

Monica Abbott holds the record for most strikeouts in NCAA DI history, with a whopping 2,440 throughout her four year career at the University of Tennessee. She was the first pitcher in NCAA history to record over 500 strikeouts in all four seasons. Abbott also set the single season record for strikeouts with 724 in her senior year, a season that also featured 23 no-hitters and six perfect games for the star pitcher.

What softball player has won the most Olympic medals?

Laura Berg has won the most medals in Olympic softball history. She won a total of four Olympic medals throughout her lengthy Olympic career. Berg won three consecutive golds in 1996, 2000, and 2004, as well as a silver medal in 2008. This collection of accolades makes her the winningest player in Olympic softball history. With another four gold medals under her belt for the WBSC, Berg had a remarkable track record of success in her playing career.

What D1 softball player holds the record for most career home runs?

In regards to D1 college softball, the all time home run leader is infielder Laura Chamberlain. In her four year college career with the Oklahoma Sooners, Chamberlain bashed a total of 95 career round trippers. This mark is three ahead of the second place all-time home run record holder, Katiyana Mauga of the University of Arizona. The fact that Chamberlain only played in 39 games her junior year makes this all time mark all the more impressive, with her career numbers reflecting that she averaged just shy of a home run for every two games she played in.