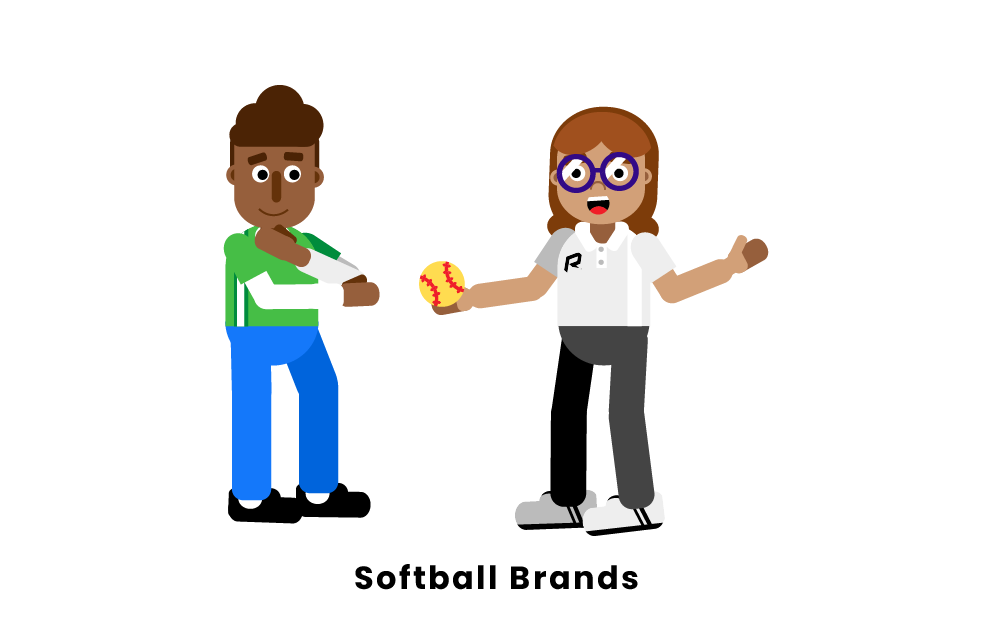 What are the most popular softball brands?

Rawlings is known as "The Gold Glove Company." That name comes from the sponsorship that the company has with Major League Baseball in providing its Gold Glove Award every year. The company has been around as a sportswear brand since 1887. The company started manufacturing gloves in 1919, originally with baseball but that has transitioned into softball. Rawlings is one of the most successful companies that is founded specifically for sports equipment, outlasting other companies and distributing their gear across the country and the world. Though Rawlings is known for gloves, they also produce softballs and helmets, as well as other gear needed for softball other than clothing. Rawlings equipment is a heavily trusted brand. Rawlings provides all of the helmets for the National Professional Fastpitch Softball League and is the official softball for the NCAA. In that sense, Rawlings has a hand in all of softball, both at the professional and collegiate level.

Mizuno was founded in 1906 in Osaka Japan as a shop that sold primarily baseball and other "Western" equipment. In the years after that the demand for Mizuno sports equipment grew. In 1913, Mizuno began to manufacture baseball gloves and the year after mass production began as the company grew and produced more and more for the world. Today, Mizuno is a top brand internationally for everything sports, even becoming an official sponsor for the Osaka Marathon. Their speciality remains baseball and softball though, making gloves and balls and other equipment including cleats. Mizuno has the honor of sponsoring arguably the biggest face in softball history. Jennie Finch is a Mizuno sponsored athlete. She wears the brand and has done so for a few years, touting Mizuno gloves as the best. On top of Finch, Vanessa Shippy, a professional softball player, is sponsored by the company, talking about her bat as the best she has used.

Easton is the leading brand for bats, both baseball and softball, and has been known for their bats and now protective equipment. Easton is the sponsor of many major collegiate baseball teams and softball teams. Easton was founded in 1922 making bows and arrows first. They got into the aluminum business with arrow shafts before transferring that to other sports as well. In the late nineteen nineties, Easton became popular due to their business in the composite business making hockey blades, hockey sticks, and in 1999 the first ever two piece metal baseball bat. In this Easton has expanded into the baseball and softball markets. Today Easton is one of the biggest brands in baseball and softball. Easton is the official sponsor of USA softball as well as National Champions UCLA. The reach of Easton in softball is giant and they have cemented themselves as a giant of the industry.

Demarini is the most famous bat brand in the world. Most people in the United States know Demarini as a maker of metal bats, especially youth and Little League bats. Demarini has now expanded to be a bigger brand, doing not only bats for baseball and softball but apparel, protective equipment like helmets and useful items like batting gloves. Unlike other companies on the list, Demarini was founded with softball specifically in mind. Ray Demarini, the company's founder, was an avid softball player and he decided to make a bat for that specific purpose. An innovator in bat technology the company has cemented itself at the top of the softball world. Softball players sponsored by Demarini include Sierra Romero, Mo Mercado and more. At the collegiate level, they sponsor Auburn University, Baylor University, the University of Michigan and more.

Nike is the most famous sportswear brand of all time. Founded as a shoe brand, Nike is well known across the world for their footwear, equipment, clothing, athletes, advertisements, and so much more. When it comes to softball, Nike has been making equipment and clothing for years. Nike is most known for their shoes, and with softball it is no different. Their softball cleats and shoes are famous and worn by lots of athletes. On top of that, Nike makes pants for softball as well as undershirts, other shirts and uniforms. Nike's dri-fit technology is revolutionary for softball clothing. Nike is a company that has always supported women's sports, softball among them. The brand runs camps for softball players to gain exposure. Additionally, Nike is a sponsor for many universities, most notably the Oregon Ducks and all of their sports, including softball.

Wilson, born in 1913 as a company split off from a meat packing one, using animal by-product to string up tennis rackets, and eventually to make baseball and softball gloves using leather. In the nineteen forties, Wilson bought a knitting company and has made everything stitched in sports, from balls, to gloves, to uniforms as well as other sports, golf, soccer, basketball, football, and many more. In terms of softball, Wilson is one of the most iconic glove companies, probably second to only Rawlings. Their A2000 series is both legendary for the quality of glove as well for the customization process that allows players to create their own colors and styles of glove. The A2000 is worn by players at all levels and is one of the most trusted gloves in the world. Part of the reason that softball players trust Wilson so much is their advisory staff, top softball players, including many members of Team USA including Monica Abbott, Courtney Gano, and Cat Osterman to name a few. Wilson provides gloves for many college softball players as well.

Franklin is a brand that, unlike other brands on the list, does not differentiate between their baseball and softball equipment. Interestingly, this does not hinder their popularity within the softball community, they still are a top selling brand for softball equipment, protective gear, apparel like sweatbands and more, and most famously, batting gloves. This came in 1983 when the brand came together with Mike Schmidt, Philadelphia Phillies star third baseman, to create a custom batting glove for him, one that would become popular with MLB stars at the time. As players wore more and more batting gloves, the brand rose to prominence in that field. Today, the brand's batting gloves are popular amongst baseball and softball players alike. Part of the appeal of the gloves, like Wilson's fielding gloves, is the ability to customize said gloves. Being able to add any colors to any part of the gloves allows for player creativity and for players to show their style on the field. Franklin does not specifically endorse schools or athletes when it comes to softball but many athletes can be seen wearing their equipment.

Worth is unique from other brands on the list in that they differentiate baseball and softball and they sell specific products with softball in mind. In this, Worth has established itself as a provider of everything softball, from bats to even making the ball used. Worth is most famous for their bats, though they have expanded in recent years and now sell gloves specifically for fastpitch softball as well. Worth makes their bread and butter in softballs and softball bats, both for slow pitch softball, where durability and power are key components, and in fastpitch softball where speed and strength are key for equipment. Worth's brand is built on slowpitch softball as much as fastpitch, and it shows in their advisory staff of players, most of whom are big time slowpitch male players like Keith Martin and Jason Matusik. That being said, there are fastpitch female players on the advisory staff as well, namely, Sara Poteat and Justine Real.

Schutt is a brand that has been in the business of protective gear, a leader of said industry for many decades, and with softball it is no different. In 1935 Schutt was the leader of football facemasks and in 1962, when masks became mandatory for professional football players, the company was at the forefront of protective gear. Today in softball, as more pitchers and corner infielders are opting for facemask and even hockey style helmets to protect their faces and heads, Schutt once again is ahead of the game, so to speak, providing those protective helmets for all players. Schutt also now makes everything softball, from home plates to pitching rubbers to helmets and umpire equipment and even bags. Schutt is a place where any softball player can go to get all kinds of equipment. Schutt protective gear can be found on many softball athletes though none sponsored.

Ripit is a softball specific brand that has flourished, realizing that the market for brands that focus on softball is unfortunately small. Ripit does everything softball, from gear to apparel like socks and shirts and pants to bags and batting gloves. Another feature that makes Ripit unique is that they do big orders of apparel and uniforms for teams. Their website features opportunities for players to order uniforms for entire teams, in this way, Ripit has sponsorship deals with softball teams and programs across the country. With 13.2 thousand followers on Instagram, Ripit, though lesser known, is definitely a big brand in the softball industry, that fact is undoubtable. Additionally, Ripit has become popular because they allow players to test their gear. For thirty days a player can decide if the gear is right for them before they can choose to return it if they so desire. With a four hundred day warranty, Ripit allows players to return broken equipment, ensuring a reliable product for all softball players.