The Top 10 Rules Of Softball 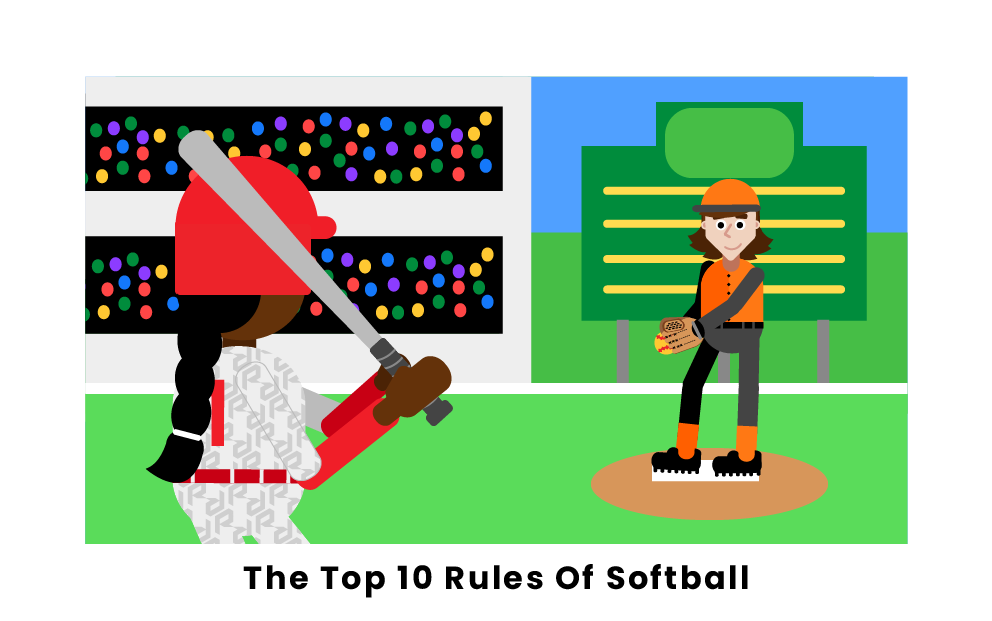 Softball features a wide variety of different rules that govern the game. Some of these rules are rather insignificant, only coming into play in very specific situations. However, there are also general rules that define the whole nature of the sport. Read on to learn about the top ten rules of softball and how they’ve shaped the sport through the years.

What are the most important rules of softball? 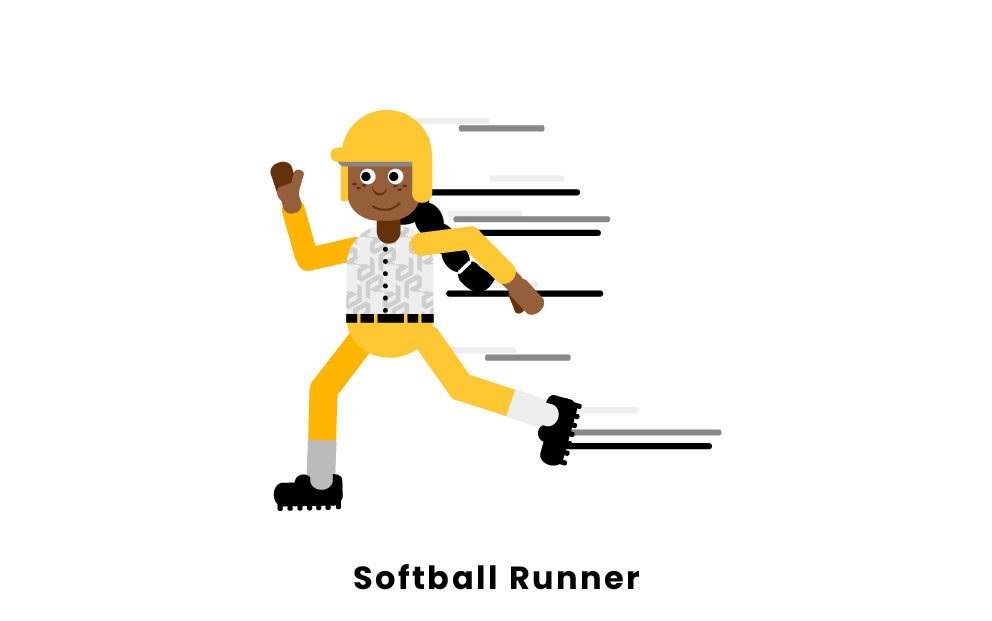 Runners must step on each base as they advance from one to another. Within the sport of softball, there are four bases (first base, second base, third base, and home plate). The bases also must be advanced in numerical (counter-clockwise) order and cannot be skipped around. Only when the runner is deemed safe by the home plate official is the team awarded a run. Multiple runs can be scored on the same play as long as all runners touch each base. Runners are also able to advance multiple bases on a single hit. When a player stands on a base, they are considered safe and cannot be ruled out unless they leave the base. 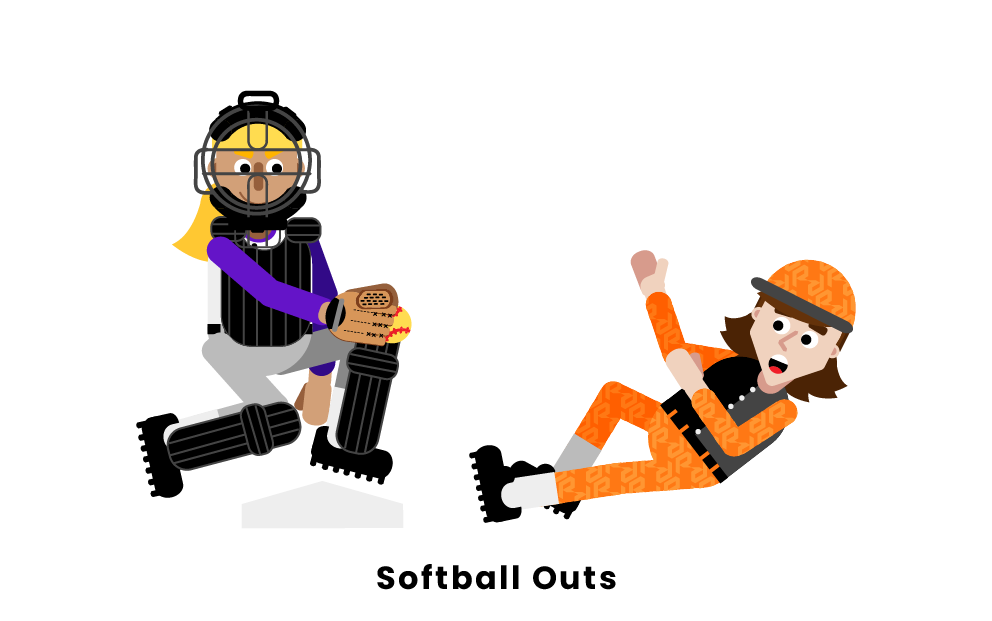 Each team is allowed three outs while at bat each inning. An inning is made up of two halves, the top half of the inning is when the away team bats, and the bottom half is when the home team bats. An out is when the opposing team catches a fly ball, strikes out a batter, or throws out a runner. Each team wants to limit the number of outs they get while batting and get three outs as fast as possible while in the field. 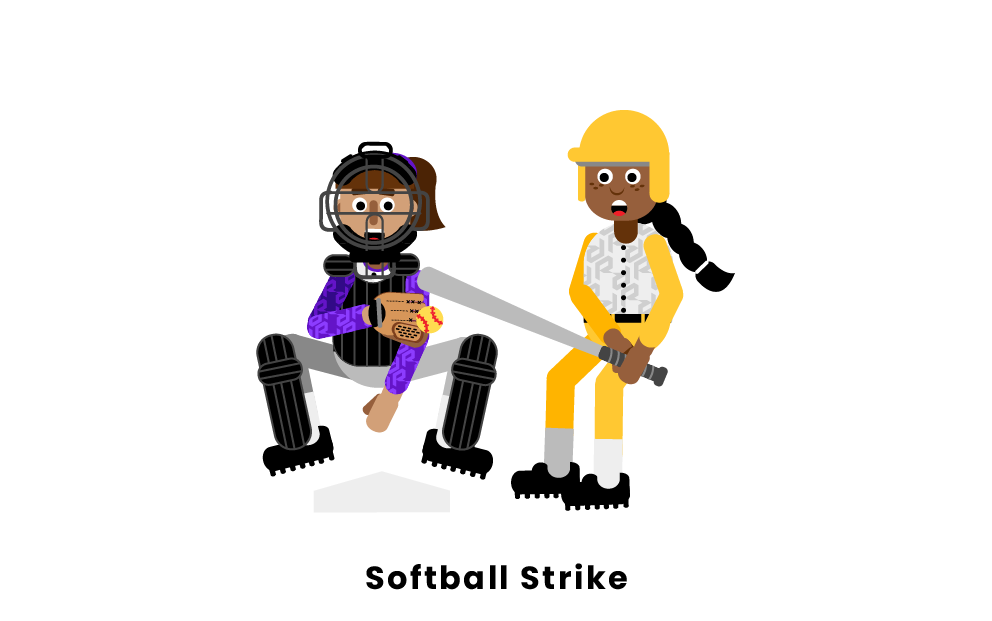 Each at-bat, a batter is allowed three strikes before they are called out. This is known as a strikeout, which is not the desired outcome for a batter. The umpire behind home plate judges whether a pitch is a strike or a ball. To be determined as a strike, a pitch must fall within the strike zone, an imaginary area over home plate between the batter’s knees and the bottom of the shoulders. If the batter swings at any pitch thrown and does not make contact with the ball, that is automatically a strike as well. Players can strike out swinging (miss the ball, swing) or strike out looking (umpire calls strike with no swing). 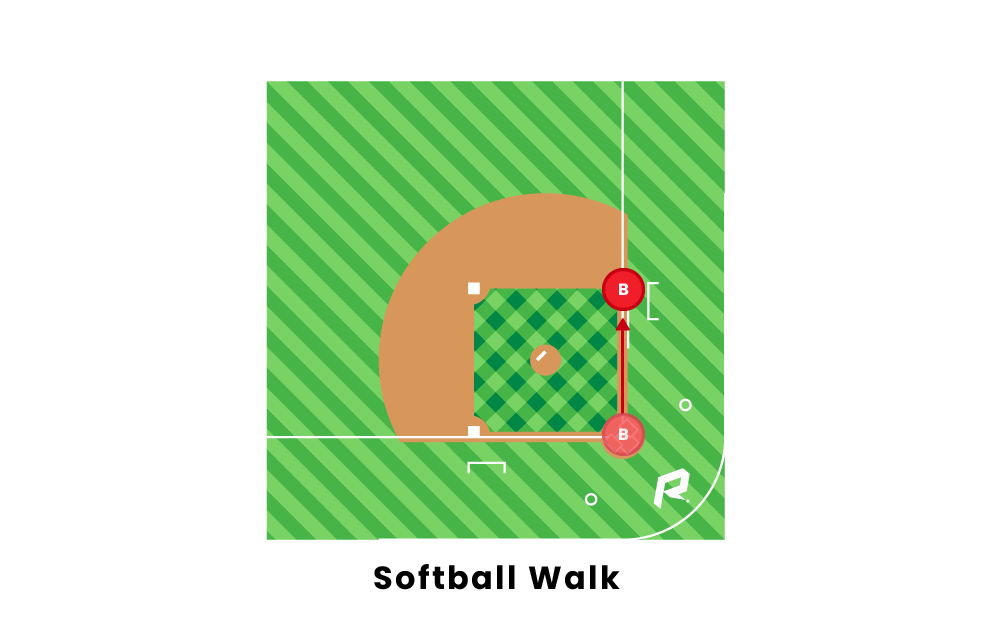 If the pitcher throws four balls before getting three strikes or having the batter hit the softball into play, the batter is awarded first base. If there is another runner already present at first base, they are allowed to advance as well. Balls are pitches thrown outside of a batter’s strike zone. For pitchers, walks are never preferred, and they usually mean longer at-bats with more pitches. A walk is commonly also referred to as “base on balls.” 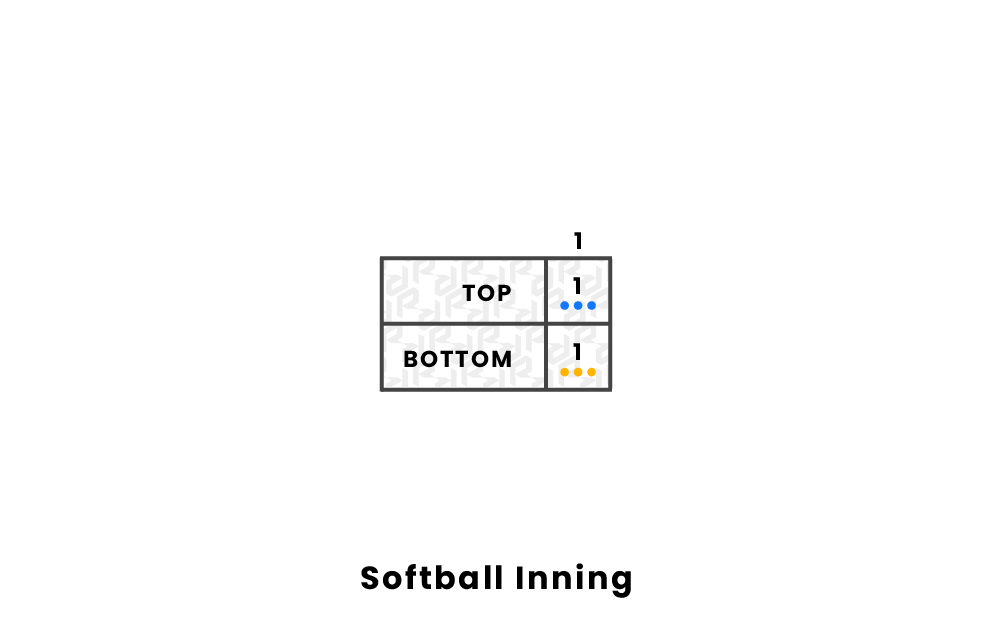 There are seven full innings played in a softball game, and whichever team has the most runs at the end of the seven innings is deemed the winner. Each inning has two parts consisting of three outs each, for a total of six outs in each inning. If there is a tie at the end of the seven innings, depending on the league type, additional extra innings will be played to determine a winner. This is one of the key differences between softball and baseball, as a standard baseball game consists of nine innings.

Each team is allowed nine active players per game. There are nine positions within the sport of softball, and these nine players must take up these positions. There is also a set batting order for these nine players. The order is set for each game and continuously cycles throughout the innings. Teams may have additional reserve players, which can be substituted into the lineup in case players are injured or the team needs a fresh batter.

In slowpitch softball, a common variation of the sport, there are ten active players per game. 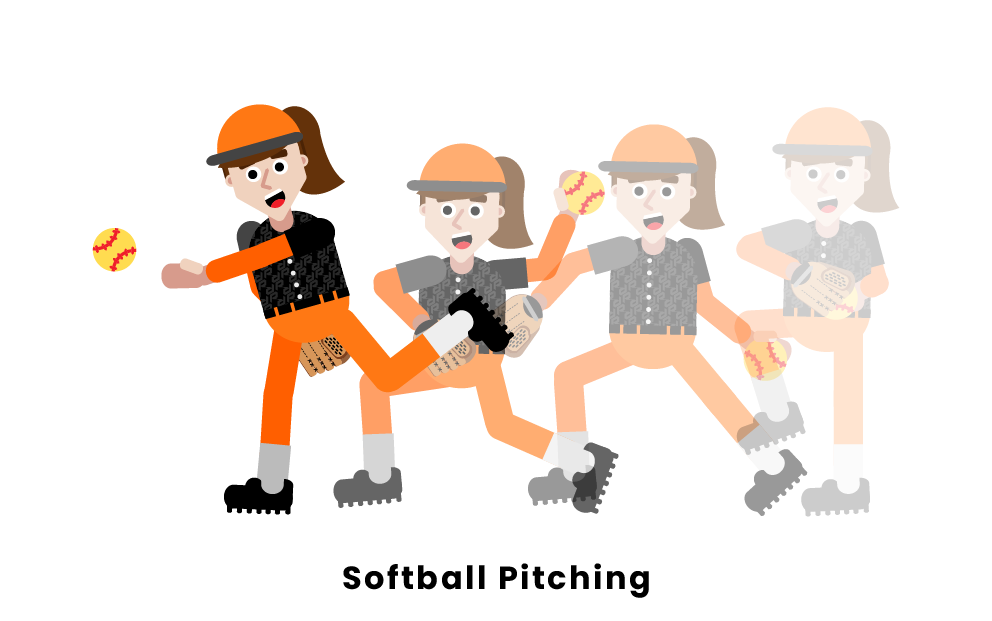 Unlike in baseball, pitchers in softball must throw the ball in an underhand motion, with their hand below their hip. The pitcher must, with both feet, make contact with the pitcher’s plate prior to throwing a pitch, and no part of the wind-up can involve any stopping or forward motion.

8. Foul Balls are softballs hit out of play 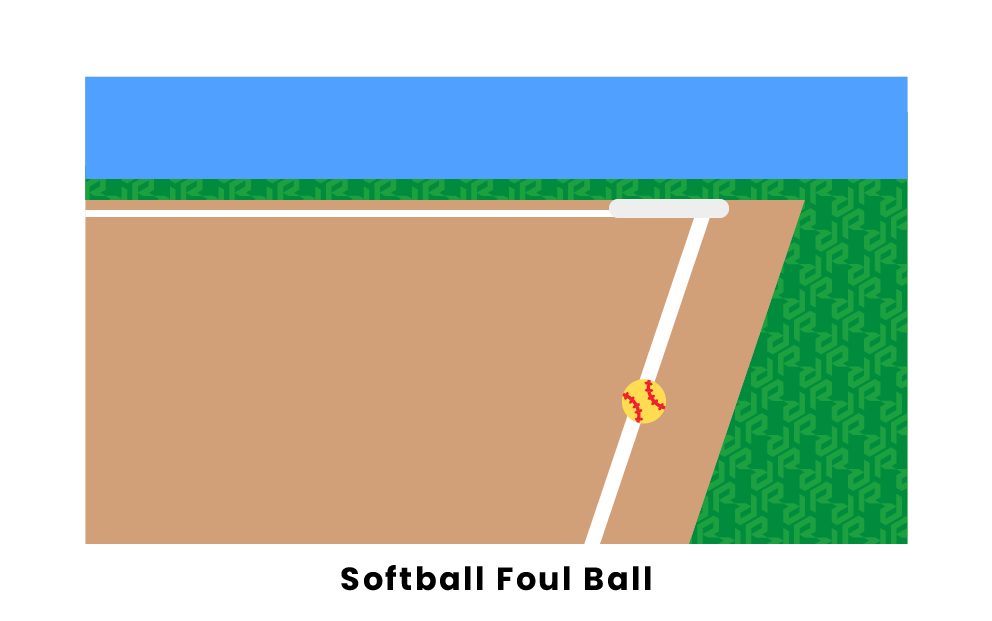 Foul balls are any softballs hit out of the regulation field of play. On the right and left sides of the field, there is a foul line drawn in white chalk. Balls hit outside of this line are called foul, and runners cannot advance on these balls. If a batter hits a foul ball, they receive one strike but cannot strike out on a foul ball. If the batter fouls a ball with two strikes, then an additional pitch is thrown, and the strike count remains the same. If a foul ball is caught without hitting the ground, the batter is out.

9. Runners must stay within the base path 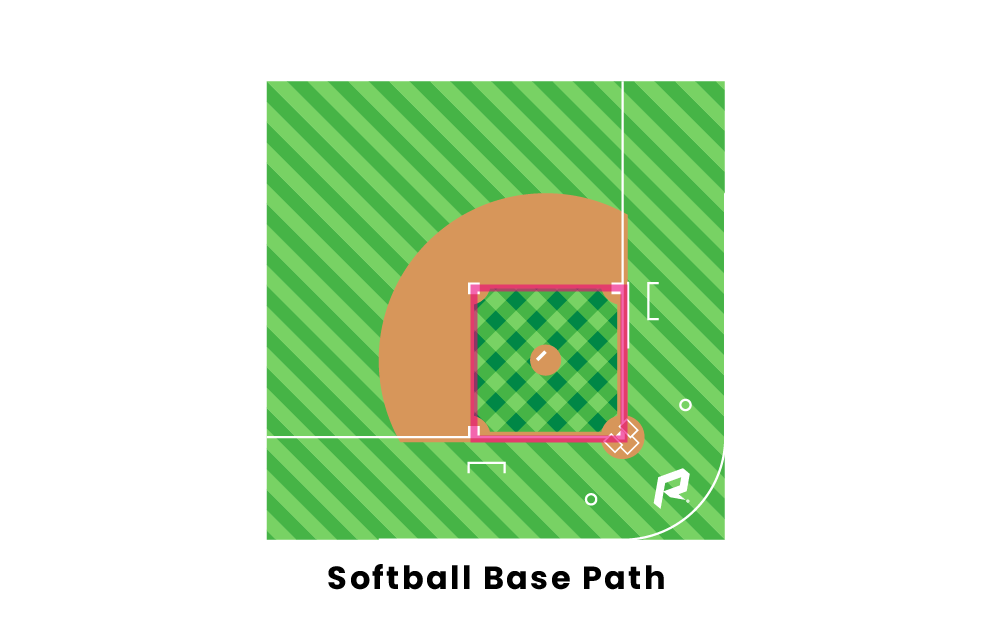 While advancing around all four bases, runners must stay within the designated base path, or they will be called out. Between each base, an imaginary straight line is drawn, and runners are allowed to run up to three feet on either side of this line (base path). This gives players some space to avoid potential tags by fielding players while still containing them within the base path. The base path is not a set line and is created by the runner once they begin to run towards a base.

10. Getting Hit by a pitch means a free base 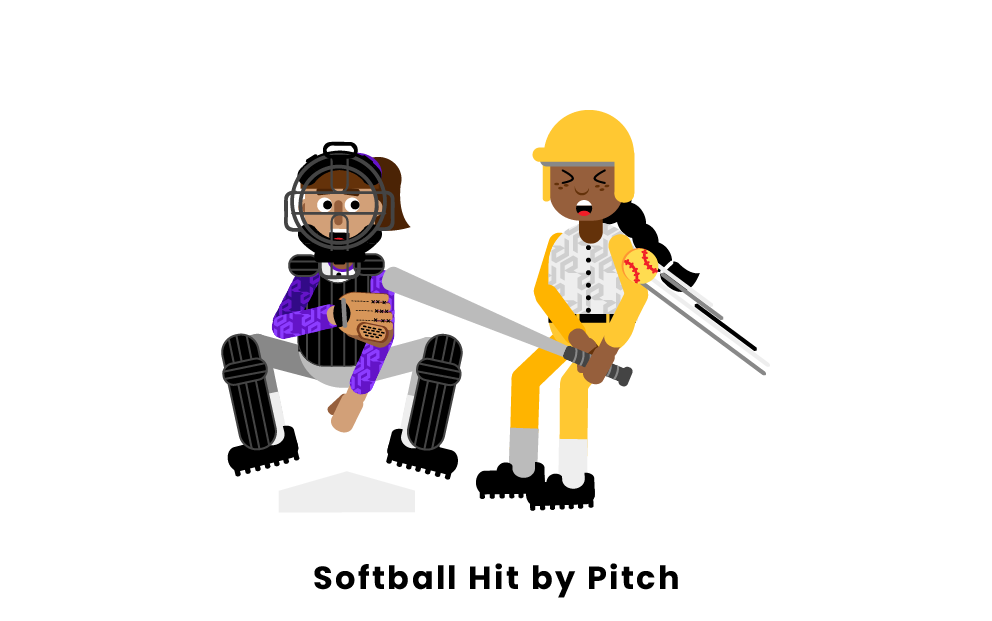 When a batter is hit by a ball thrown by the pitcher outside of the strike zone, they are awarded first base. It does not matter what the strike or ball count is; it's an automatic base. Runners on bases are also able to advance a base if necessary. Hitting a batter with a pitch is usually an accident on the side of the pitcher, but it can be seen as poor sportsmanship if it seems intentional. The batter should always try to avoid being hit by a pitch, but that is often easier said than done.

What are the rules relating to pitching in softball?

Pitching in softball is done underhand, contrary to the overhand motion used in baseball. Much like baseball, the pitcher must have both feet touching the rubber prior to wind-up and delivery. The pitcher also must take a signal from the catcher or at least appear to be taking a signal while still on the rubber. One of the pitcher’s feet must be in contact with the pitching rubber at all times prior to the release of the ball.

What are the main rule differences between baseball and softball?

The main rule differences between baseball and softball are the number of innings and how the ball is thrown. Softball games consist of seven innings, while baseball games are nine innings long. This difference in innings totals makes baseball games longer and also increases the need to use more than one pitcher in any given game. Baseball pitchers are also permitted to throw overhand. This is done by choice, as throwing overhand typically results in higher velocity pitches.

Where is softball most popular?

Currently, the two nations in which softball is most popular are the United States and Japan. This coincides with the high popularity of baseball in both nations. Other countries, including Canada, Puerto Rico, and Mexico, also have a fast-growing number of softball fans and players.

Pages Related to The Top 10 Rules Of Softball