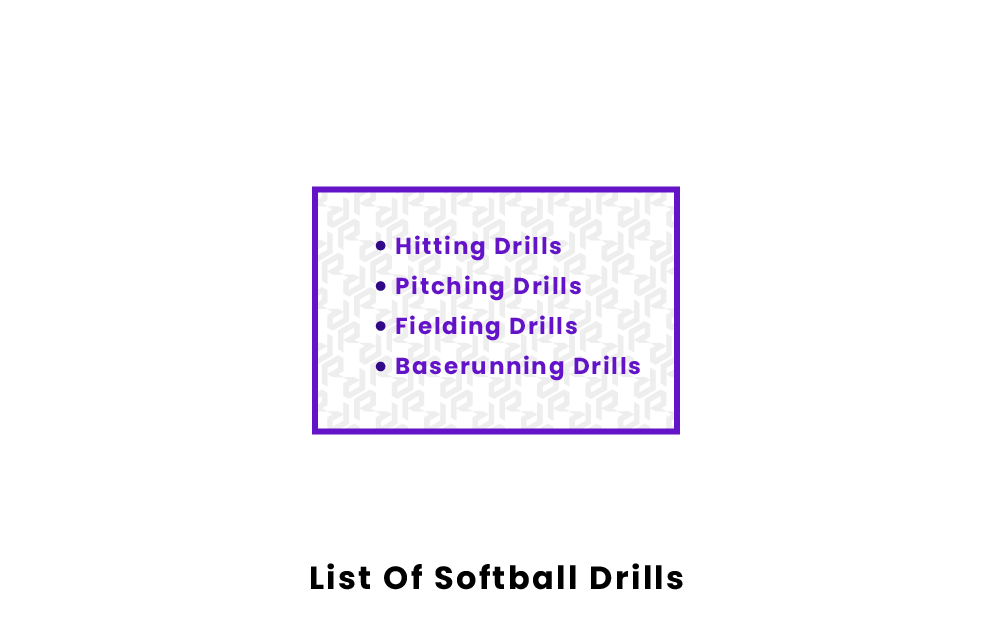 There are many components to a good softball player. Developing skill at this sport requires practice with hitting, pitching, fielding, and baserunning. This list will demonstrate how you can have fun while learning these skills with the rest of your teammates.

Stand at the plate ready to hit. Your coach will be on the mound with two different colored balls in their hand. They will throw both at the same time, telling you which color to hit. Your job will be to focus on the two balls and concentrate on hitting the right color. If this drill is fairly easy for you, add a third ball to make it more challenging.

Set up two tees right in front of each other; both will have a ball on top. Stand behind the first tee and get ready to swing. Take a practice swing to make sure you are hitting the ball with full contact. If done correctly, the first ball will hit the second ball. This drill focuses on having a level swing, making it easier to contact the ball.

Set up a tee at home plate. Take a bat and shave two sides in order to make it flat like an oar. Have the player hit balls off of the tee with the flattened bat. The goal is to teach players to hit through the ball. In order to generate more power, you must fully swing the bat. Using a flat bat reinforces this because you have less weight on the bat, forcing you to swing harder.

Take steps backward from the mound, pitching a ball at each step you take. Keep moving backward until the ball can no longer reach the catcher’s glove while in the air. Begin to work your way back to the mound by pitching to the catcher repeatedly from each spot. This helps with power as well as accuracy due to the longer distance from the normal pitching mound.

Get ready to pitch from the mound. Instead of starting in a normal position, lift your knee opposite from your throwing hand. Then begin the rest of your pitching motion. The key to this drill is balance, helping you make sure that your pitches are always on target.

Pitching from your Knees

Set up on the mound with a catcher at home plate. You will pitch to the catcher, but in specific locations. These locations can be decided by either the catcher or coach. This drill teaches you to be accurate with your pitches. After a lot of practice, you will be able to master your placement and be a very dangerous pitcher.

Set up on the mound. Your coach will start a timer for 30 seconds. Your goal is to pitch as many balls as you can to the catcher before the timer goes off. This drill teaches endurance as well as accuracy. You will build up strength from the amount of repetitions you complete during the short time frame. After the time is up, either rotate or take a short break and repeat.

The purpose of this drill is to keep the ball in front of you. Set up in the infield standing up, and your coach will slowly roll you a series of softballs. As the ball approaches, get on one knee and guide the ball into your glove. Next, return to your feet and throw the ball to the correct base. Make sure your throw is accurate and makes it to your teammate in time!

Set up in the outfield grass. Get ready on one knee, as your coach will stand with a bucket of balls about 15 feet away from you. He will toss a ball towards you that is just out of your reach. It is your job to either catch the ball or field it by diving towards it. This drill teaches timing as well as form when it comes to catching a ball slightly out of your reach.

Set up about 10 feet from the outfield fence. Your coach will toss a ball towards you that is high and deep in the air. Your job is to find the fence behind you while searching for the ball. You can do this by stretching out your throwing hand. Once you find the fence, make the catch by either jumping or standing still.

This drill focuses on releasing the ball quickly when the opponent is almost at first base. Place a fielder on third base. Slowly roll balls away from the field of play, so that the third baseman has to chase the ball in order to retrieve it. The job of the third baseman is to quickly retrieve the ball, turn, and throw it low toward first base. If done correctly, the ball will bounce right before reaching the glove of the first baseman.

Place three softballs about three-fourths of the way from third to home. Place a runner and a fielder both on third base. When the drill starts, the runner on third must make it to second base before the fielder can retrieve and throw all three balls to second base. If the runner wins, their team gets one point. If the fielder wins, their team is awarded a point. Make sure to swap runners and fielders so they can get practice on both offense and defense.

Have a coach stand in between first and second base. Place a runner on first base. The coach has a tennis ball in his hand at about eye level. As soon as the coach drops the ball, the runner has to catch the ball before it bounces twice. You can adjust this drill by moving further back, depending on the speed of the runner on first.

Have a fielder on first base and third base. Set up a tee by home plate and have a hitter hit the ball. The hitter must reach as many bases as they can before both of the fielders reach the ball that was just hit. For every base reached, one point is awarded.

Have a player on second base, with three outfielders behind them. Have either a coach or teammate hit a base hit into the outfield. On contact, the runner on second must try and make it to home plate before they are thrown out. This teaches the fundamentals of base running as the runner must use good angles in order to quickly make it home. Sliding is also practiced in this drill if the throw home is close.