Which MLS Teams Have Never Won A Cup? 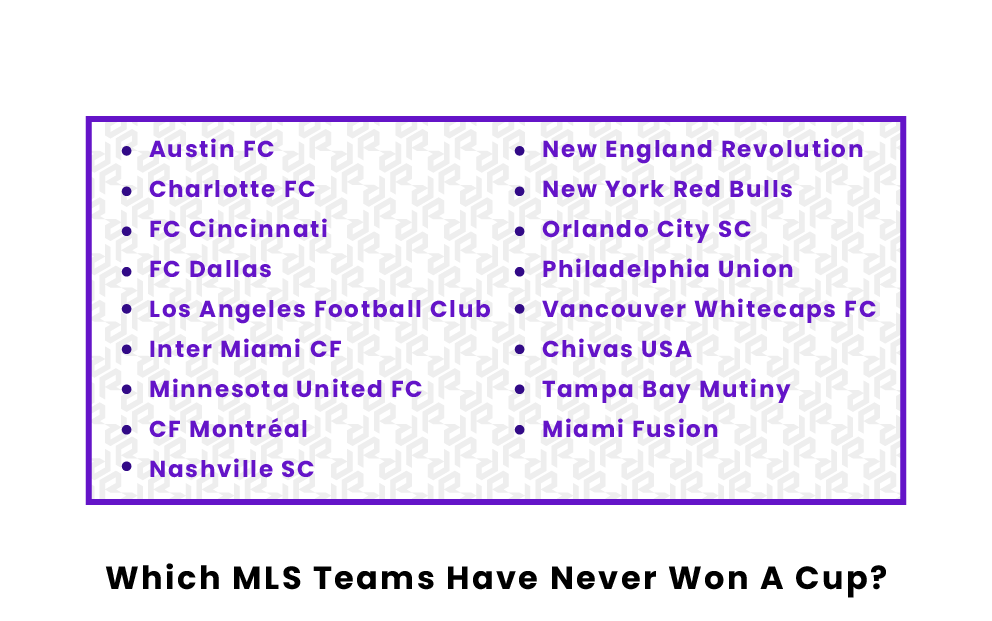 Only 14 of the 28 active clubs have won the MLS Cup in 26 years of activity. Read on and take a look at the MLS teams that have never won a cup!

Austin FC is among the youngest teams in the MLS, as they have played less than two full seasons. In their inaugural season and only full season, Austin FC did not qualify for the playoffs, ending second to last in the Western Conference standings and in the bottom four in the whole league.

Founded in 2019, Charlotte FC has yet to finish its first-ever full regular season. Therefore, “The Crown,” as the club is called due to the crown in its crest, has no playoff history yet and is among the teams that have never won the MLS Cup.

Since they joined the MLS in 2019, FC Cincinnati has never qualified for the playoffs. In its inaugural season, the Southwest Ohio team finished 12th in the Eastern Conference and 14th in 2020 and 2021, far from any postseason glory. They never won more than six regular season games each year.

FC Dallas is among the three founding members of the MLS that have never won a cup. The Texas side has made the playoffs 18 times in 26 seasons and reached the final in 2010, which ended in a heartbreaking 2-1 extra time loss against the Colorado Rapids.

In 2018, LAFC became the second MLS franchise in Los Angeles. Since then, LAFC has made the playoffs three times out of four and even finished first in the Western Conference in 2019. Three playoff appearances led to two first-round exits and a loss in the semifinals in 2019.

Inter Miami CF is a young franchise, as its first season in the MLS was in 2020. In two full seasons in the MLS, Inter Miami CF only reached the playoffs in their inaugural season, losing 3-0 to Nashville SC in the preliminary round of the Eastern Conference.

Minnesota United FC has only played in the MLS for five full regular seasons. After not making it to the postseason in the first two MLS seasons, Minnesota qualified for the playoffs for three consecutive years, picking up two first-round exits in 2019 and 2021 and a Western Conference final loss in 2020.

CF Montréal joined the MLS in 2012 after almost 20 years of minor leagues. Since then, the Canadians have made it to the playoffs only four times, never being a true contender for the MLS Cup. Their best placement is an Eastern Conference Finals loss against Canadian rivals Toronto FC in 2016.

Despite joining the MLS only in 2020, Nashville SC has made it to the playoffs in both of their first two seasons. Both times Nashville was eliminated in the Eastern Conference Semifinals, in 2020 by Columbus Crew, and in 2021 in a heartbreaking penalty shootout against the Philadelphia Union.

The New England Revolution is the team that has lost the highest number of MLS Cup Finals, with four, in 2002, 2005, 2006, and 2014. Having played in every MLS season, they are also one of the three founding members who never brought home the cup.

The New York Red Bulls are the third team among the MLS founding members to have never won the cup, despite reaching the final in 2008, when they lost 3-1 to Columbus Crew. In 26 seasons, the Red Bulls have missed the playoffs only four times and lost four times in the Eastern Conference Semifinals.

In eight seasons of activity, Orlando City’s best result has been their loss in the “MLS is Back Tournament” Final. After missing the playoffs in their first five seasons, Orlando City made it to the playoffs in 2020 and 2021, picking up two first-round exits, respectively, to NYCFC and Nashville SC.

The Philadelphia Union has been playing in the MLS since 2010 and has had mixed success in the playoffs. They have made it to the MLS Cup playoffs six times, with their best result being a 2-1 loss in the Eastern Conference Finals in 2021 against NYCFC.

In 11 seasons playing in the MLS, the Vancouver Whitecaps FC has never been close to reaching the MLS Cup glory, as they have only made it to the playoffs four times. Their best results have been two Western Conference Semifinals losses in 2015 against the Portland Timbers and 2017 against the Seattle Sounders.

Pages Related to Which MLS Teams Have Never Won A Cup?