Where Is Soccer Most Popular? 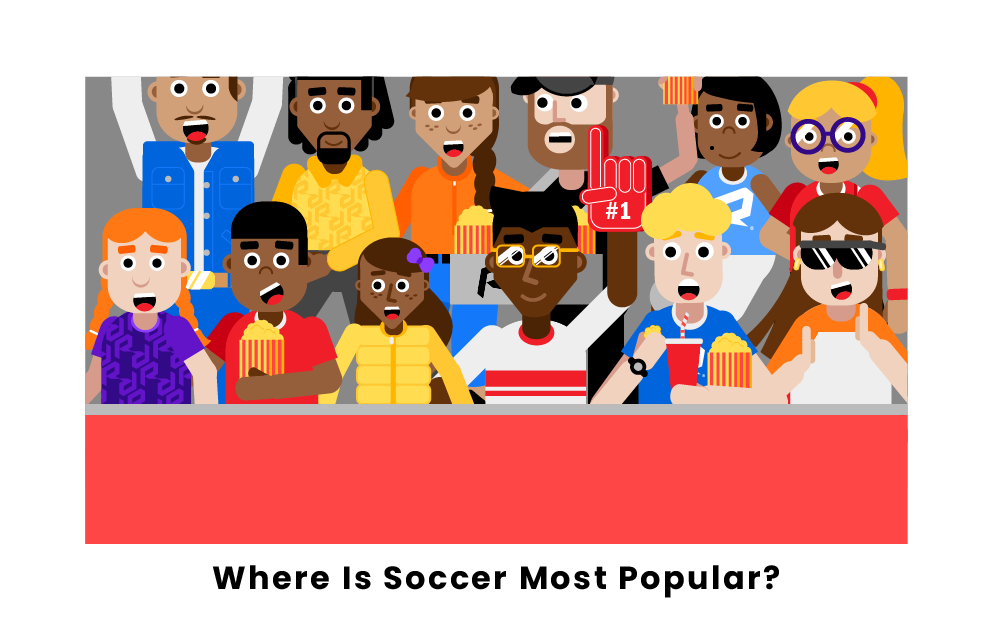 Modern soccer as we know it today was invented in 1863 in England, but the earliest records of kicking a ball around started in China in the 2nd and 3rd centuries. Since the mid-1860s, soccer has grown over time and become one of the most popular sports in the world. The 2018 FIFA World Cup had nearly 3.6 billion viewers, which adds up to more than half of the world population over four years-old. Plus, the FIFA World Cup Final in 2018 had 1.1 billion viewers alone.

From an international standpoint, the FIFA World Cup, along with soccer in the Olympics, is the most-watched sporting event in the world. However, individual nations also have their own regional soccer leagues that contribute to the sport’s popularity. Soccer is so popular and taken quite seriously that former Liverpool FC coach Bill Shankly in the Premier League in England once said, “Some people think football [soccer] is life or death. I assure you, it’s much more serious than that.”

In the big five European markets (Spain, Italy, Germany, France, and England), there are over 130 million soccer fans. Additionally, just over half of Russia is invested in soccer. While modern soccer started in England, the U.K. alone has over 70 different clubs. Accessibility to watch and play soccer in Europe is at an all-time high, meaning children are involved in the game at an incredibly young age. In addition, the leagues in Europe are quite competitive, most notably the highest division in Germany in the Bundesliga, Serie A in Italy, La Liga in Spain, and the Premier League in England (EPL). Cities rally around their respective clubs and attend matches in an energetic environment. This leads to many clubs becoming so popular due to their success in high-leverage moments and following. For instance, Real Madrid, a squad in La Liga in Spain, has over 100 million Instagram and Facebook followers. FC Barcelona, another team in La Liga, also has over 100 million Instagram and Facebook followers.

International squads’ success also contributes to the sport’s wide growth and popularity in Europe. The reason for such great success stems from the easy accessibility to the game, with cheaper equipment than sports such as golf or croquet and ample clubs to play for. England had one World Cup victory in 1966, Italy has four World Cup championships, most recently in 2006, Germany also has four, and France has claimed the coveted trophy twice. With a European country being so successful on the game’s greatest stage, it will only lead to more investment in soccer in Europe. A combination of accessibility, club success, and international success makes soccer so popular in countries like Germany, Italy, France, and England, among other nations in Europe.

In the late 1800s, there was a large influx of Europeans in Argentina that introduced Latin America to the game of soccer, and from there, it has continued to grow in popularity. South America has some of the greatest soccer players to ever step foot on a field. For example, Lionel Messi from Argentina has 86 goals in international play and has eight Ballon d’Or awards to his name, which is the most for any player. Pelé from Brazil has 77 goals in 92 appearances for the Brazilian International Team and is the all-time leading scorer for Santos, which is a club in Mexico. Individual success from players born in Latin America helps people gain interest in the sport, which makes it so popular.

South America is also host to numerous individual leagues for professional clubs. Similar to Europe, cities rally around clubs from all over the continent, and thousands attend big venues to watch soccer. An example of a popular club is Flamengo, a club in Brazil that is estimated to have nearly 44 million fans.

South American nations have ample success on the international stage. Brazil has the most FIFA World Cup victories in the world with five, while Uruguay and Argentina each have two. Plus, the Copa América is a tournament between North and South American countries that garners attention from all involved. Due to the ample tournaments and opportunities to watch and play high-quality soccer, the sport’s popularity in South America is incredibly high.

Pages Related to Where Is Soccer Most Popular?