When Was The First Soccer Game? 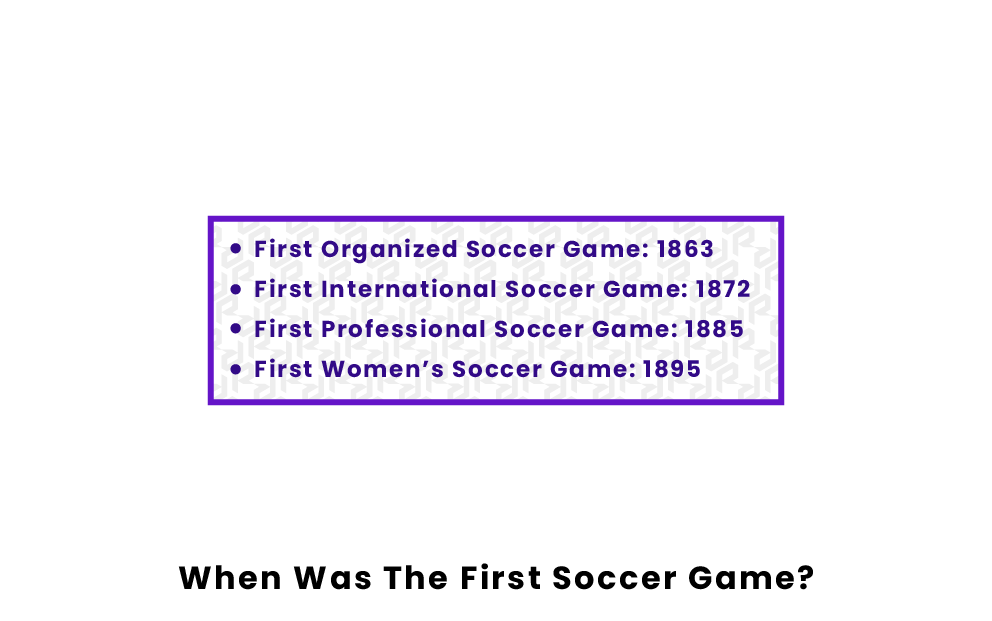 Soccer is the most popular sport in the world and has been played across the globe for centuries. Have you ever wondered when the first soccer game was played? Keep reading to find out all about the first ever soccer game, along with the first international and women’s matches.

Before the first rules of soccer were written down by Ebenezer Cobb Morley in 1863, soccer was a sport largely played by unorganized groups of people. The sport itself has roots that travel as far back as Ancient China, Greece, and Rome, but its modern origins go back to England, where the sport we now know as soccer was developed in the 1800s.

The first organized soccer game was played on December 19, 1863, in London, England, between Barnes Football Club (BFC) and Richmond Football Club (RFC), which ended in a 0-0 tie. This first game followed the “13 Original Rules of the FA”, which were written by Ebenezer Cobb Morley, who was the captain of Barnes Football Club and set up the game with Richmond. This first game gave the FA a good basis on how to improve the game’s organization, and this was a great benchmark for the progression of soccer in general.

The first international soccer game was on November 30, 1872, between England and Scotland in Glasgow, Scotland. This first-ever international match ended in a 0-0 draw with over 4,000 spectators in the crowd. Leading up to this game, there were quite a few unofficial meetings between the two teams as impromptu games. However, this game was recorded as the first official one. International games were, and still are, composed of the best players from each nation. The price of admission for this first-ever international appearance by any team from around the world was one shilling, the British currency at the time.

The first professional soccer game was played during the 1885-86 season of the English Football Association. The year prior, the FA had sanctioned Preston North End for paying their players. The club admitted the charges, but maintained that other clubs were doing the same. Under pressure to allow it, the FA legalized paying soccer players prior to the start of the 1885-86 season. The Blackburn Rovers were the first team to register as a professional club in 1885.

The first professional women’s soccer game took place in London, England, on March 23, 1895, at Crouch End Athletic Ground. This game became a very significant stepping stone for women in the world of sports as it received a major amount of publicity, with many papers reporting it and over 10,000 people in attendance as history was being made. This was the first-ever women's soccer game to be sponsored as well as officially sanctioned by a governing body, which was huge at the time. Reporters coined the game as “highly entertaining.” The game ended in a 7-1 win, with North beating South in the end.

Pages Related to When Was The First Soccer Game?